Greetings, readers! This is Catie, the Morro Bay National Estuary Program’s Communications and Outreach Intern. I had the privilege of participating in the Estuary Program’s most recent small-scale experimental eelgrass restoration effort. We want to fill you in on the process here.

Eelgrass (Zostera marina) plays a number of important roles in the function and health of the Morro Bay ecosystem.

Its long blades form an underwater forest, which provides a diverse crowd of creatures a place to rest, find food, and spawn. These are some of the creatures that we found during the replanting effort:

The Estuary Program has been monitoring eelgrass for the last fifteen years. From 2007-2016, we have tracked its rapid decline. The rate of loss has since stabilized, and we are beginning to see eelgrass come back in certain areas, but there is still reason for concern.

Though we have not yet pinpointed the cause(s) of the decline, the Estuary Program is collaborating with researchers at Cal Poly as well as other experts to closely monitor the Bay’s eelgrass populations, to work to understand the reasons for eelgrass loss in the bay, and to find ways to help restore it. So far, researchers at Cal Poly have mostly ruled out some potential causes, including drought and crab predation. Research is ongoing into other possible causes, such as light levels in the bay and sedimentation.

These collaborative efforts included planning and executing this experimental planting project. During this effort, we collected hundreds of eelgrass shoots from a healthy bed in Coleman Beach and planted them at two sites in the bay where eelgrass used to grow. With the help of our fantastic staff and partners, the three-day harvesting and transplanting project was a success.

We began each day by laying out a transect (a specific area designated for scientific observation or collection) along the shore during low tide before collecting shoots by hand.

We harvested three eelgrass shoots per meter, totaling over 500 shoots by the end of the project. We were careful to collect shoots that were of substantial size and were healthy enough to grow successfully in their new locations. Permits for scientific collection projects like this are overseen by the California Department of Fish and Wildlife, which reviews detailed project plans for the restoration effort. 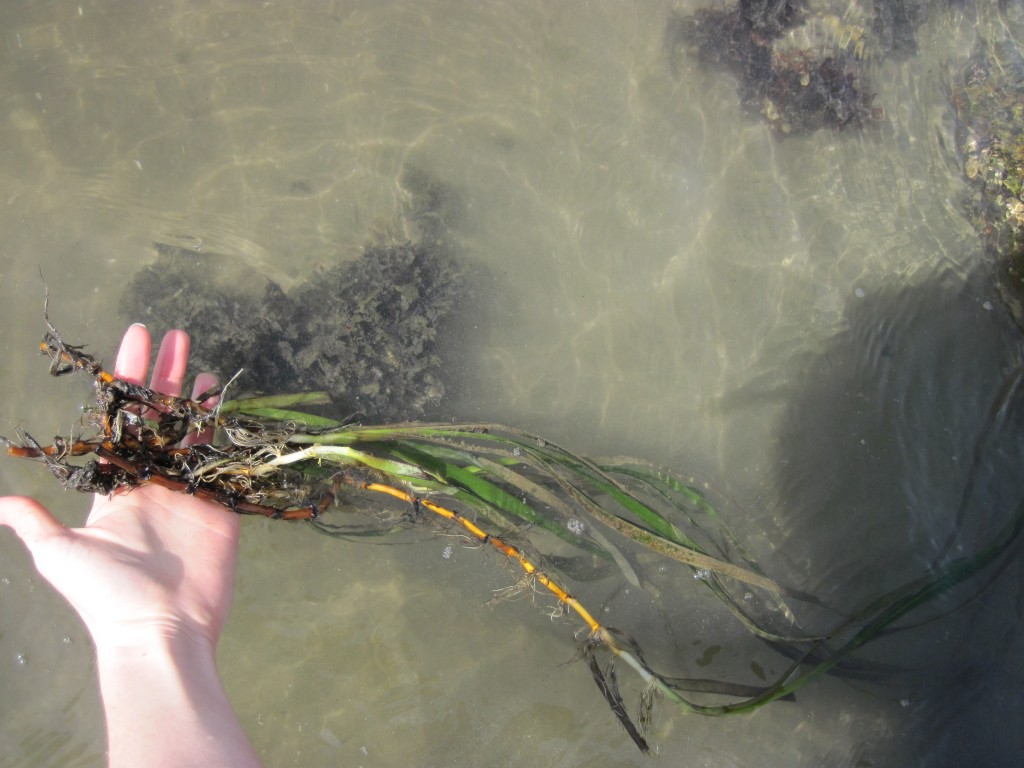 A few of my collected eelgrass shoots, some with epiphytes growing on the blades. Ephiphytes are plants that grow on other plants. They are not parasites and do not harm the eelgrass shoots, but eelgrass shoots that have too many epiphytes may have a hard time getting the sunlight they need to grow and thrive. In the picture, the brown substance you see is composed of epiphytes.

After collecting the shoots, we prepared them for transplanting by gently rubbing off epiphytes and trimming the ends of the blades in order to later track their growth.

When we finished collecting and processing shoots for the day, staff transported the shoots to the planting sites via boat.

Estuary Program staff and our partners have been studying potential restoration sites that would maximize eelgrass growth. At each site, we took into account the water depth during various tides and the elevation in the bay. These were important factors to consider when choosing our final transplant sites. 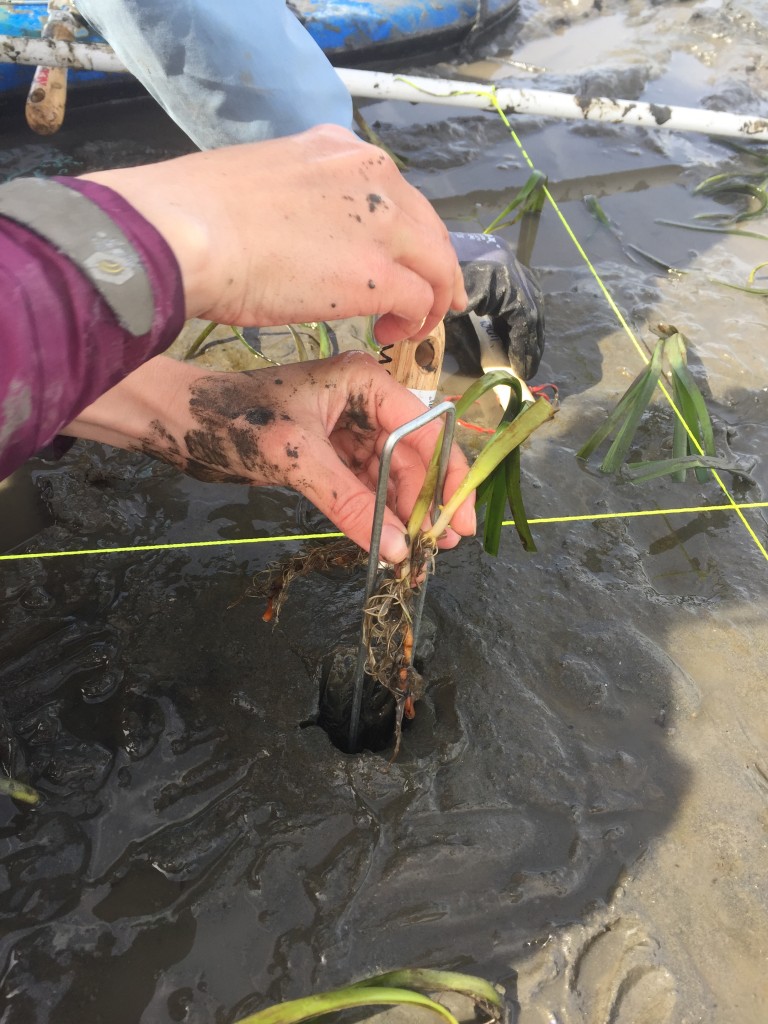 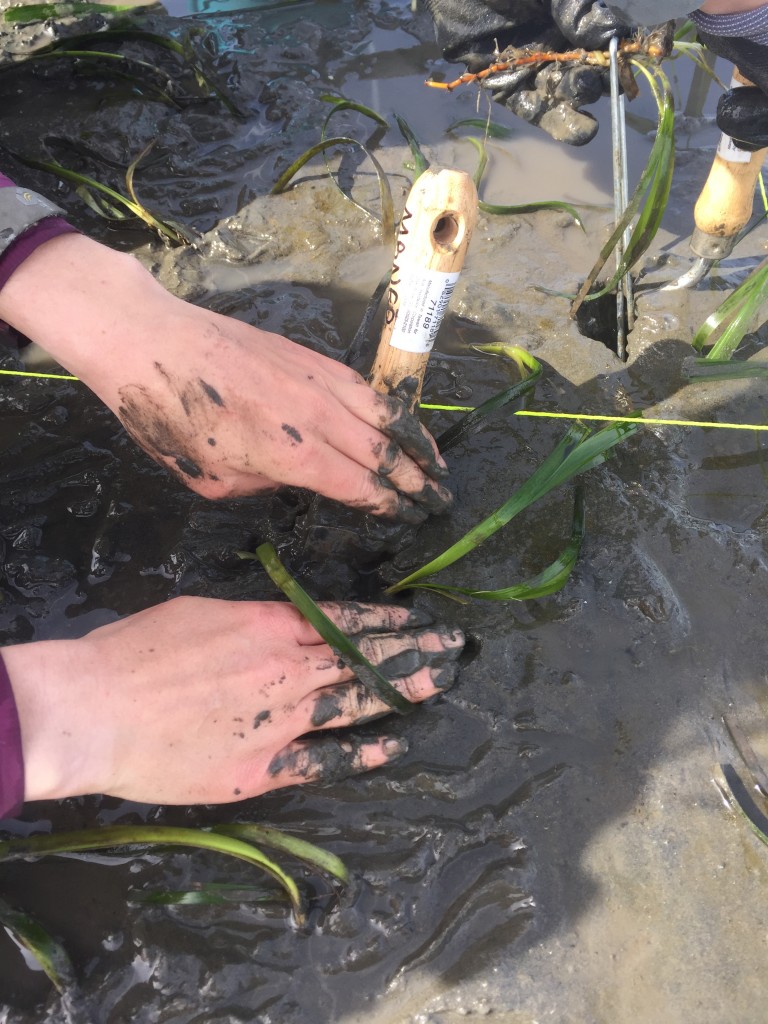 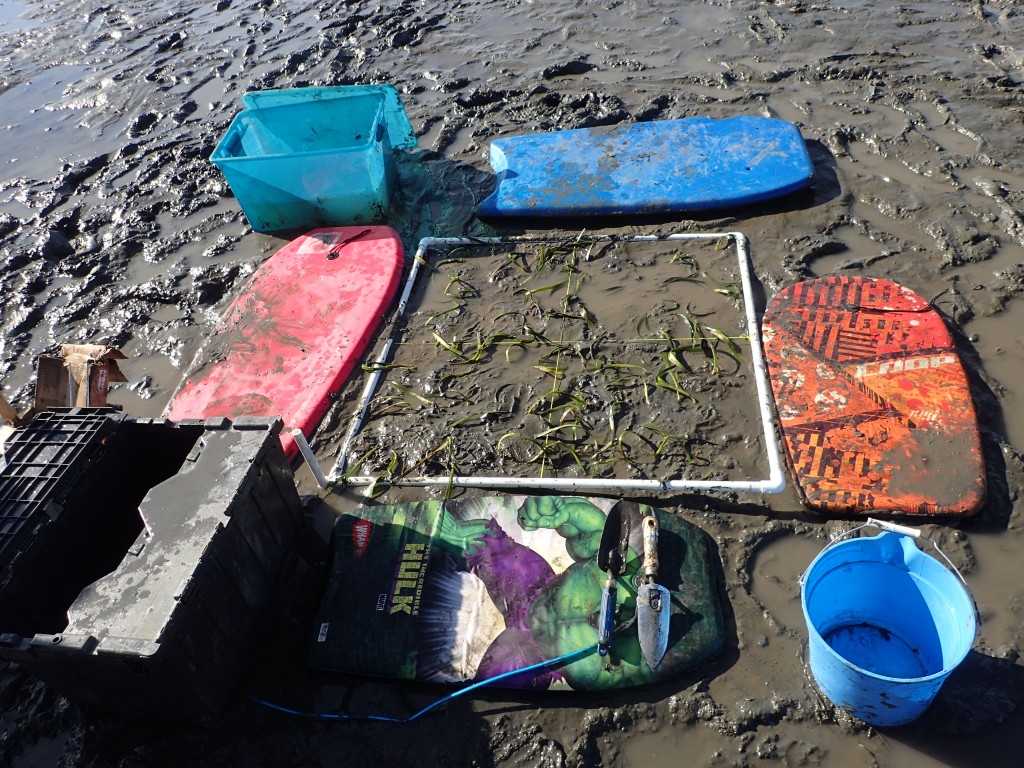 Just another day at the office!

Since wrapping up the transplanting project, some shoots have died or been uprooted, but some have begun to establish in their new locations. According to measurements taken by Cal Poly Graduate Student Erin Aiello, the average surviving shoots in the midbay have grown 51 millimeters longer, while the average surviving shoots in the forebay have grown 90 millimeters. We will continue to keep an eye on each transplant site to track how well this planting method has worked.

Explore our estuary through science

Want to learn more? Come to our State of the Bay events and explore the estuary through Science. On Saturday, April 22, we’ll be hosting an Earth Day Pickup and Paddle event at Tidelands Park, and on Thursday, April 27, we’re hosting statewide experts in birds and steelhead to talk about the importance of habitats like Morro Bay to wildlife. Learn more at MBNEP.org/state-of-the-bay.