Historical record of beavers in California

Contrary to popular belief, beavers are native to San Luis Obispo County. Prior to the arrival of European settlers, these furry, aquatic mammals were plentiful locally and across most of California. Records show that Juan Bautista de Anza brought back “thirty odd beaver skins” in addition to “several fine baskets….and the skins of eight bears,” from his visit to the recently established Mission San Luis Obispo de Tolosa in the spring of 1774.

The Bay Nature article, “Beavers Used to Be Almost Everywhere in California” shares an image of a Chumash pictograph that depicts a beaver. The rock painting, located in the Sierra Nevada’s, dates to between the 1300s and the 1500s. The article also reports that beaver remains have been found in kitchen middens dating as far back as 300 C.E.

Unfortunately, by 1785, fur traders had come to California in earnest. From this time through the early 1800s, ship manifests often listed beaver pelts, sometimes numbering in the thousands. The pelts were shipped across the ocean to Europe and Russia, where people used the pelts for multiple purposes. Some beaver pelts were stitched into coasts and other clothing. Some were scraped of their fur, which was then processed into a sought-after felt for hats, while the bare skin was treated and used as leather. Some pelts were made into parchment. Most of the beavers in California had been wiped out due to the fur trade by the mid-1800s.

This is likely why Joseph Grinnell, a pioneering zoologist and field biologist who was born in the late 1800s who completed an extensive state-wide wildlife survey, surmised that beavers had a very limited range in California and were not native to the coast. Grinnell’s Fur-Bearing Mammals of California, which he published in 1937 popularized this viewpoint in the scientific community.

The idea that beavers are not native to coastal California persists to this day, though beavers have been observed and documented in multiple locations in San Luis Obispo County.

Beavers are active in local creeks and the Salinas River

Though we do not know of any beavers present in the Morro Bay watershed, beaver sightings have been confirmed on Arroyo Grande Creek and the Salinas River in Atascadero.

This is good news for these local waterways as beaver dams create ponds and wetland areas that attract many different species and act as nurseries for juvenile fish. Beaver ponds also help sink water into reservoirs and keep creeks from going dry during the summer. The benefits they provide for wetlands and adjacent habitats continue to increase as the dams lengthen and the beaver population rises.

The many ways that beavers help wetland areas and wildlife to thrive inspired Audrey Taub to found SLO Beaver Brigade in 2020. After finding beavers on a stretch of the Salinas River where she was hiking years ago, Audrey kept returning to the area. She marveled at the change she saw around the beaver dam.

As the beavers continued adding wood and earth to their dam, the pond formed and grew deeper. New vegetation grew at the water’s edge, which kept the new pond and the water flowing through it much cooler than the surrounding air. More terrestrial wildlife started frequenting the area — including bobcats and muskrats. Fish and tadpoles flourished in the cool pond water, even during the summer when stretches of local creeks ran dry.

At this point, Audrey looked into the research being done on beavers, She was amazed at the number of beaver-related studies that scientists were doing throughout the entire USA, and especially in the arid West. From ranchers touting the increase of feed available for their cattle when beavers move in, to amazing photos of wet, lush, thriving beaver complexes surrounded by hundreds of thousands of acres of scorched land after wildfires, to seasonally-dry streams beginning to flow year-round when the beavers returned.

Audrey formed the SLO Beaver Brigade to share all of this research with out County. As Audrey says, “In our arid climate, our greatest worries are about drought, floods, and wildfires. And beavers just so happen to help mitigate those very things: droughts, floods, and wildfires. We have beavers living in our watersheds that could use our support. Additionally, we could be restoring our watersheds to hold more water by mimicking the beavers.” The SLO Beaver Brigade advocates for beavers, seeks to learn about wetland restoration from beavers, and educates others about the benefits of having beavers in their (sometimes literal, sometimes metaphorical) backyard.

A trip to a local beaver pond

One of the ways that the SLO Beaver Brigade helps people learn about beavers is by leading walks out to a beaver pond in Atascadero. On a recent walk, Audrey led a group of about 15 visitors down the trail. Because local beavers are nocturnal, it would be very unlikely to see one while walking in the full daylight.

Beavers gnaw on trees until they are weak, then let the wind and gravity take over

Audrey explains that beavers approach feeling trees very carefully. They gnaw the trunk down to the point where the trunk is weakened, listening all the while for creaks and other sounds that mean the tree might be ready to fall. Then, they move out of the way and wait for the wind and gravity to take the tree down. This saves the beavers from being crushed under the heavy trees when they fall. Sometimes the tree falls quickly, and other times the beavers have to wait a long while for the tree to fall, so they can use the lumber for their dams. In the photograph below, you can see a tree with one half of its split trunk gone. They missing trunk took about two years to fall after the beavers had finished gnawing on it.

Beavers very rarely kill the trees they eat from. Audrey notes that trees that have evolved with beavers like cottonwood, aspen, and willow, tend to recover quickly, sending up multiple new shoots from the area of the tree that has been damaged. Beavers don’t like the bitter taste of the young shoots, so they wait until they are larger to eat their bark. This gives the trees ample time to recover.

When the group reached the pond, several visitors gasped, amazed at the width of the pond that came into view through the tall reeds. 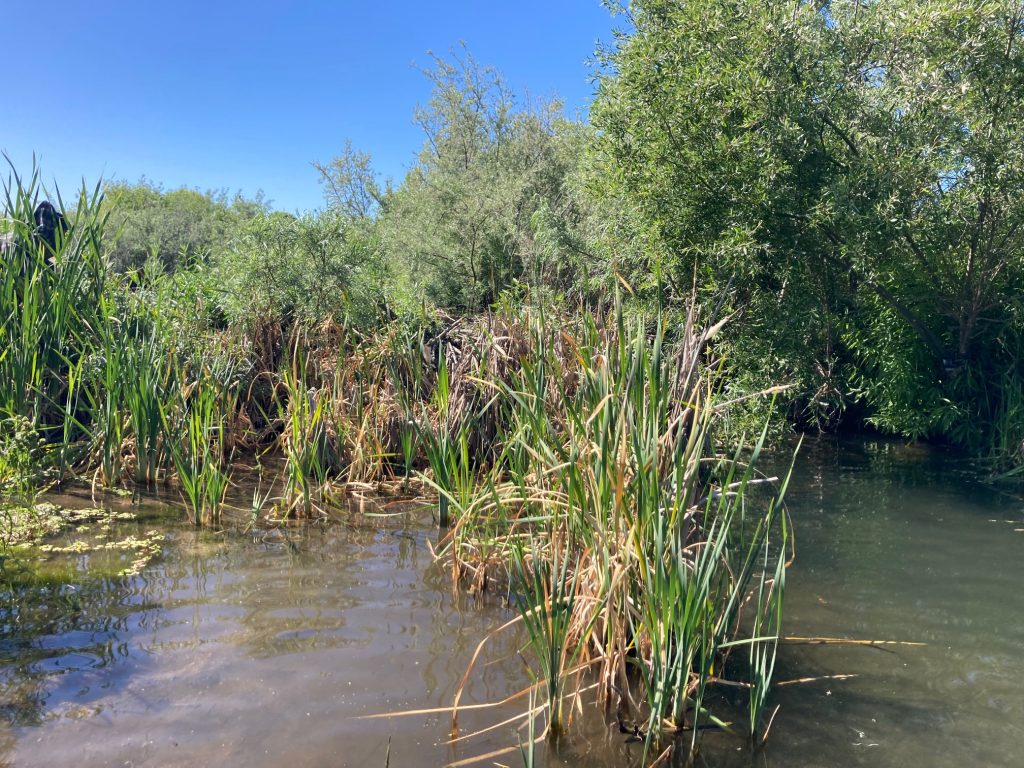 Audrey pointed out an old red-winged blackbird nest nestled in the reeds.

She also pointed out the young fish darting through the pond and explained the even fully grown fish are able to either pass through the dam itself or find one of the slides or side channels that the beavers make to move up or downstream as they wish.

A family of beavers creates multiples dams, which form a complex

Audrey shared how she has seen the beaver complex grow over the years. She explains that a beaver complex is a series of dams maintained by one beaver family. The beavers have one primary dam, which creates the largest pond. They build their lodge or bank den, their actual living space, the largest pond. The other dams are secondary, both above and below the primary pond. Audrey says that, “the more dams the better,” for beavers, other wildlife, and the ecosystem as a whole. The dams, “act as speed bumps, helping to reduce the energy in the flow of water during heavy rains. They also create more pond habitat, which allows the beavers better access to their food. It is much easier for them to swim to the trees and branches they feed on than to walk to them. As Audrey says, “beavers are very awkward on the land, but when we see them in the water, they’re graceful like dolphins.”

SLO Beaver Brigade has partnered with Dr. Emily Fairfax, Assistant Professor of Environmental Science and Resource Management at California State University Channel Islands, who is studying the beaver population in the Salinas River. Audrey says that Dr. Fairfax saw commitment in the beaver population, which has continued to building their complex in the river over the years, and raising young that then move on to create their own dams and found new beaver families. You can read more about Dr. Fairfax’s work on her website.

If you would like to help the SLO Beaver Brigade search for beavers on Arroyo Grande Creek or the Salinas River, you can! They are holding three SLO County Citizen Science Beaver Surveys this summer, on June 18, July 23, and August 13, 2022. Sign up on their website to learn more and participate.

Thank you for helping our beautiful, bountiful, and biodiverse bay.