Looking for Morro Bay Otters? If you’ve walked the Embarcadero and stopped by the South T-pier recently, you may have noticed a lot of otters in the water. In a recent interview with KSBY, Mike Harris, Senior Environmental Scientist with the California Department of Fish and Wildlife, said that prior to 2010 there were typically fewer than 10 sea otters in Morro Bay. In May of last year, a record 36 adults and 9 pups were counted. (Fun fact: a group of sea otters in the water is called a raft.)

An additional 100 plus sea otters live farther south on San Nicolas Island, as the result of a translocation program that ran from 1987 through 2012. 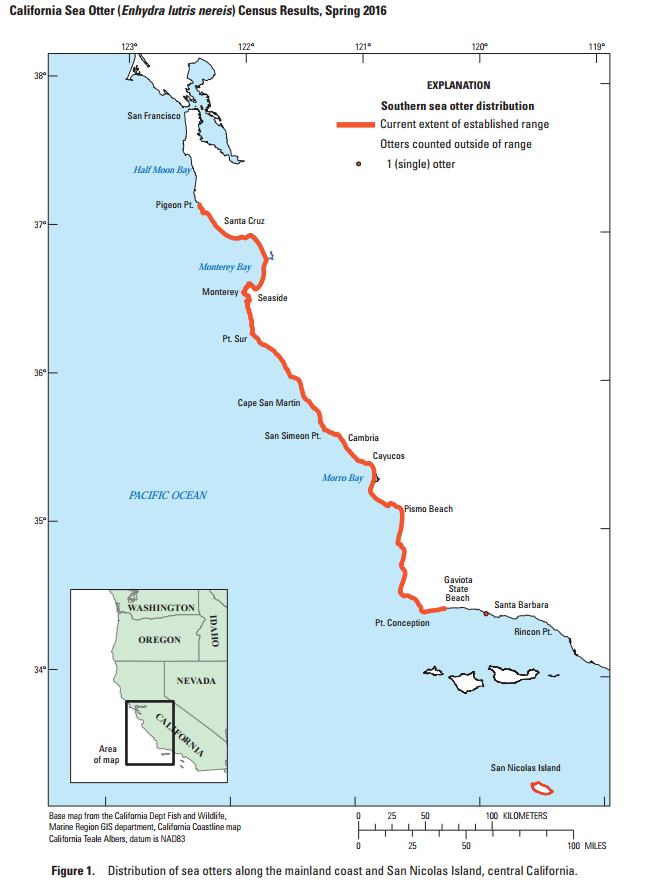 These are amazing numbers considering that otters were hunted extensively during the 18th and 19th centuries for the fur trade. They were actually thought to be extinct along California’s coast until a small group was found living in Big Sur during the 1930s.

The Southern sea otter has been protected as threatened under the Endangered Species Act since 1977. It is also covered by the Marine Mammal Mammal protection act. Protections like these, along with an increased understanding of what sea otters need to survive and thrive, has helped them make this recovery.

Growing otter populations are great for people looking to catch a glimpse of these adorable furry mammals and their puffball pups, and they’re even better for the health of Morro Bay. As a keystone species, otters help keep other populations in balance. For example, otters eat sea urchins, which eat kelp. If sea otters are not there to keep the sea urchins population in check, kelp forests can struggle.

Sea otters can also help seagrasses. Here, the chain is a little more complicated. Sea otters eat crabs, which eat sea slugs. Sea slugs eat algae off seagrass blades, which helps to keep them healthy. Without sea otters to eat the crabs, crabs would eat the sea slugs, leaving fewer of them to help clean the blades of the sea grass.

The video below shows what can happen when sea otters are reintroduced to an area.

Here’s what you can do to help Morro Bay otters

This is especially true of mother sea otters (sometimes called sows), who have to hunt for themselves and their pups. The caloric demand is so great for mother sea otters that they can raise only one baby at a time. You can help these mothers and babies out by observing this beautiful animals from a distance. This way, rather than worrying about a possible threat and missing out on a chance to catch her next meal, the mother otter can  spend her precious energy keeping herself and her baby fed and groomed.