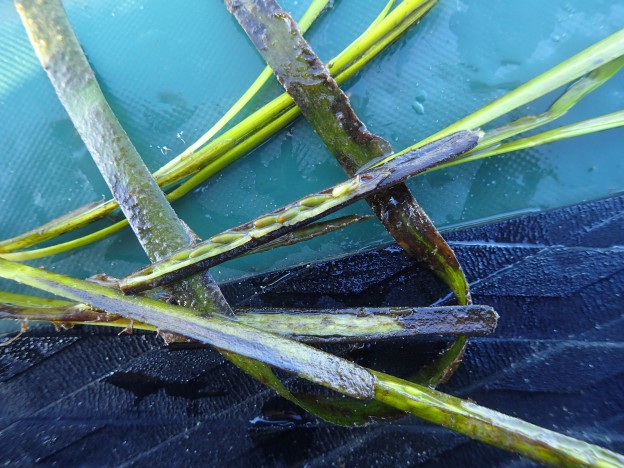 Protecting and restoring the bay and estuary takes a lot of boots on the ground. See what our volunteers and field staff have been working on during the past month.

Chorro Creek used to be home to a healthy population of steelhead trout (Oncorhynchus mykiss), however their numbers have declined. While there are multiple factors that contribute to this, a fish called the Sacramento pikeminnow (Ptychocheilus grandis) put pressure on steelhead. Pikeminnow eat juvenile steelhead and compete with steelhead for food and habitat. While native to other parts of California, pikeminnow are not native to the Morro Bay watershed. It is believed that they were introduced to the Chorro Reservoir (located on the California Men’s Colony) and are now found throughout Chorro Creek. 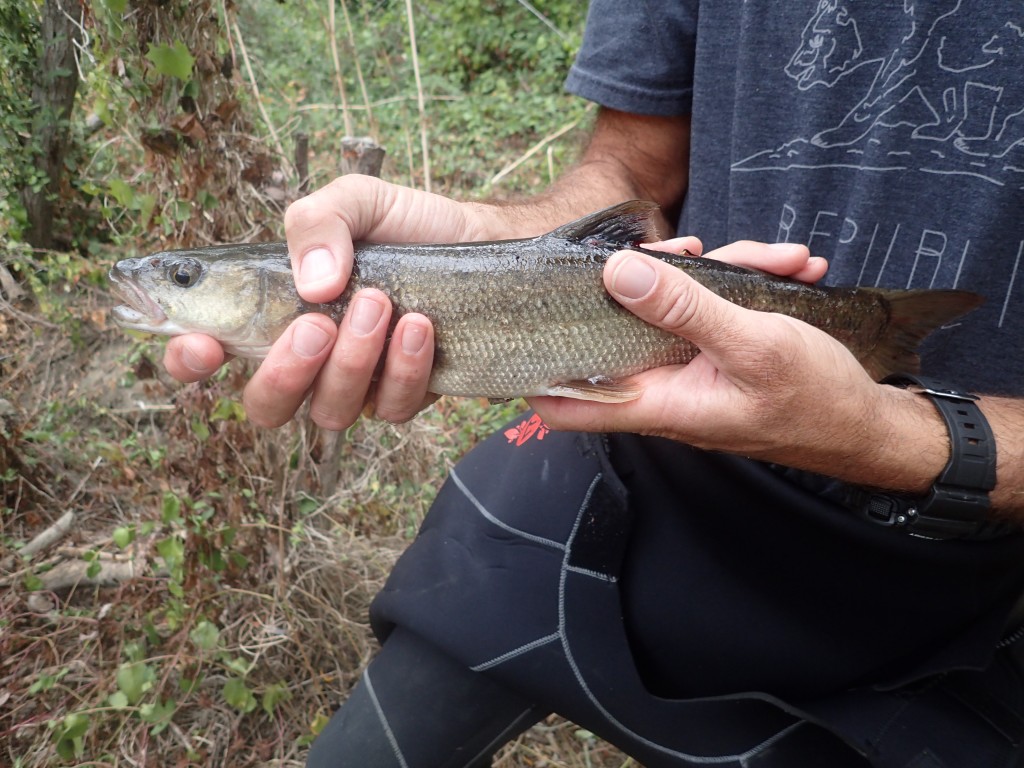 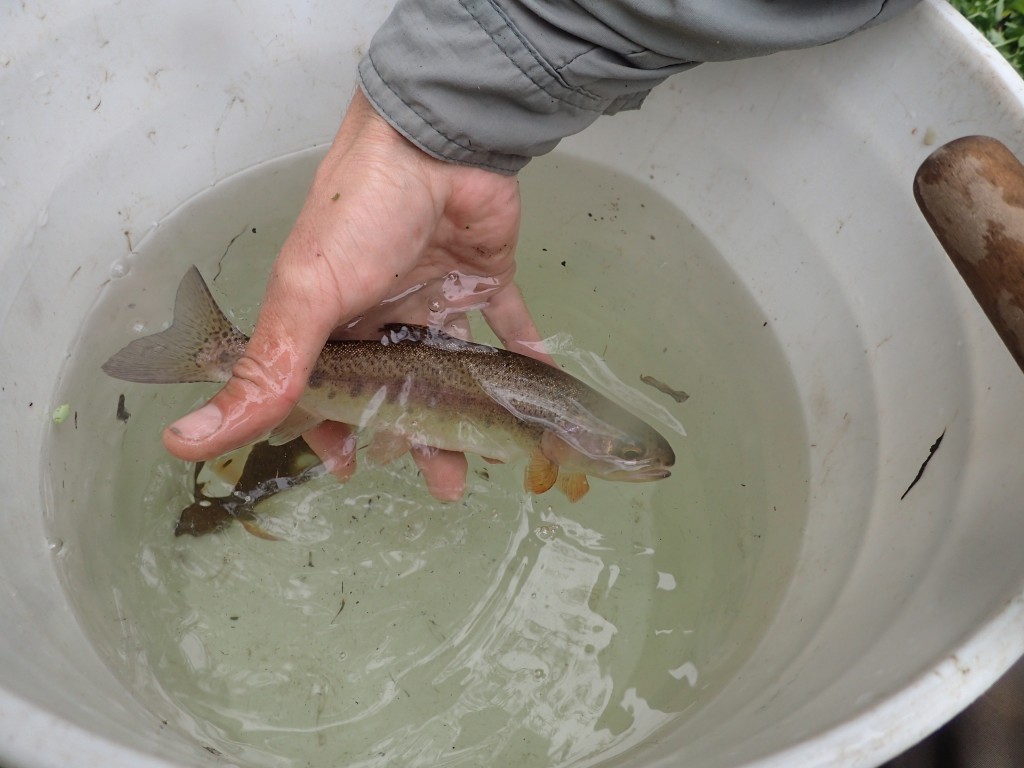 We observed both Sacramento pikeminnow and steelhead trout during the survey efforts.

The Estuary Program and partners have identified actions to control pikeminnow in the watershed. One phase of the project involves removing pikeminnow from Chorro Creek and Chorro Reservoir to improve the chances of steelhead survival. In mid-September, the Estuary Program along with Stillwater Sciences, California Conservation Corps, and volunteers completed fish surveys along multiple areas of Chorro Creek to identify abundance of native fish and remove non-native pikeminnow.

Priority areas were identified through a snorkel survey completed by the California Conservation Corps. Fish sampling was conducted through direct fishing of deep pools and the use of electrofishing (uses an electric current to affect the movement of fish towards our nets), which doesn’t harm the fish. 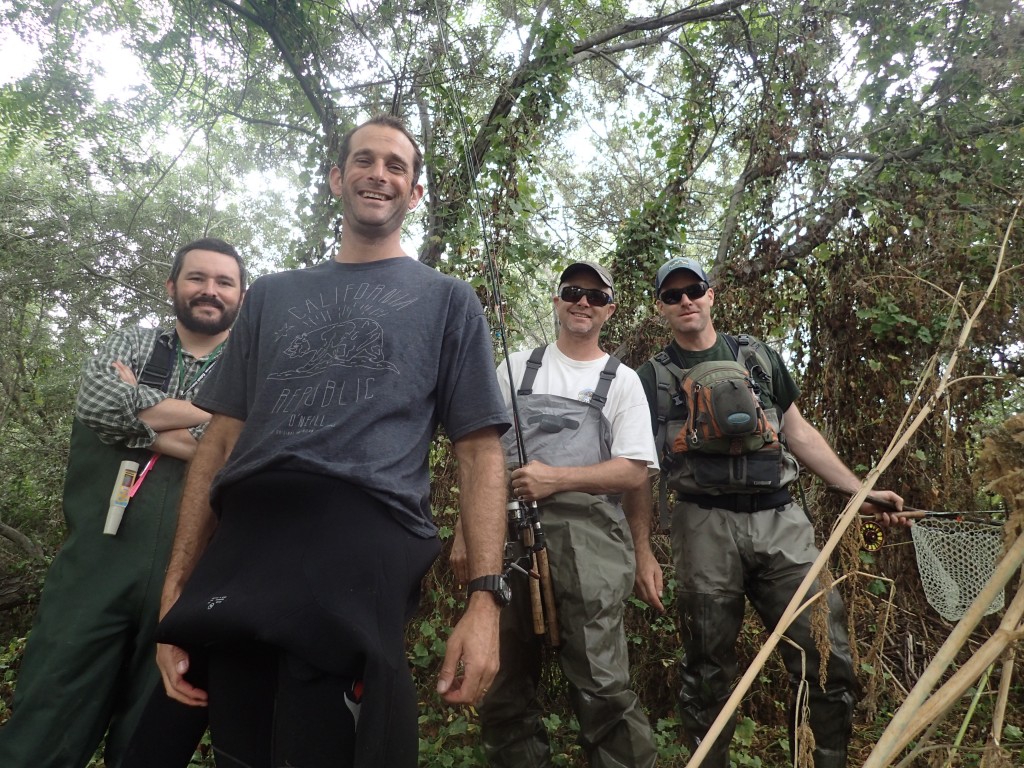 Local expert anglers volunteered to fish for pikeminnow in deep pools as part of this effort. 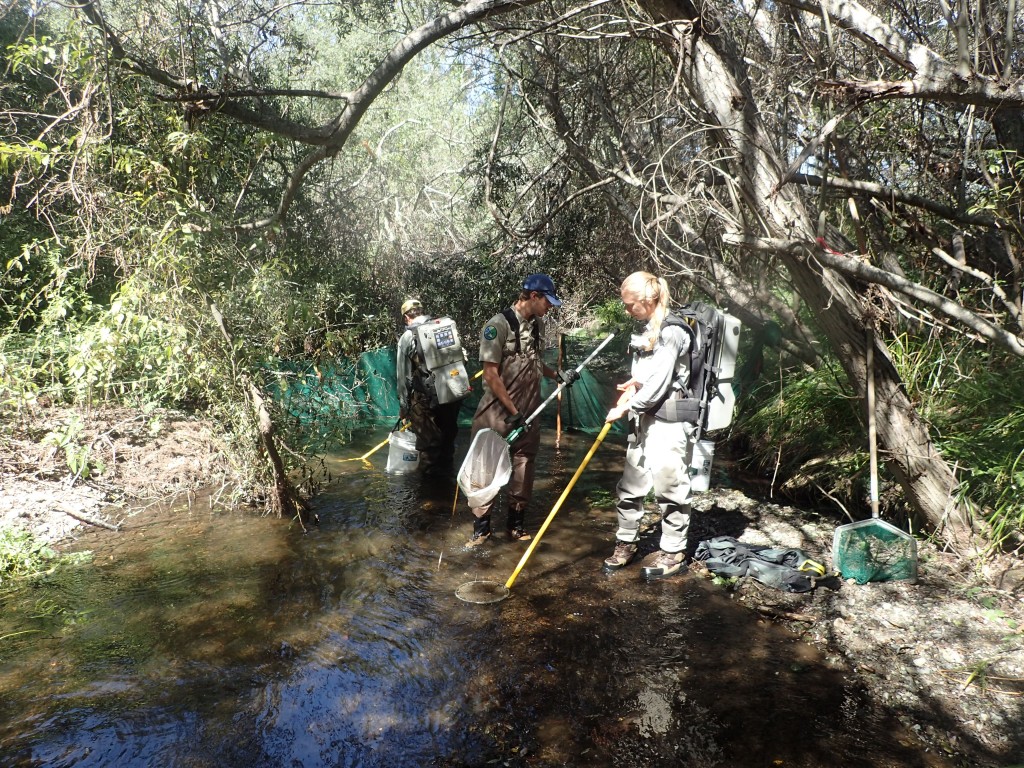 Electrofishing equipment is used to sample for fish along Chorro Creek.

Over the week-long effort, we observed native fish including steelhead, speckled dace, Sacramento sucker, and three-spine stickleback. We also removed the non-native pikeminnow. Our surveys will provide baseline data to track fish populations overtime as we continue to manage pikeminnow in future years. 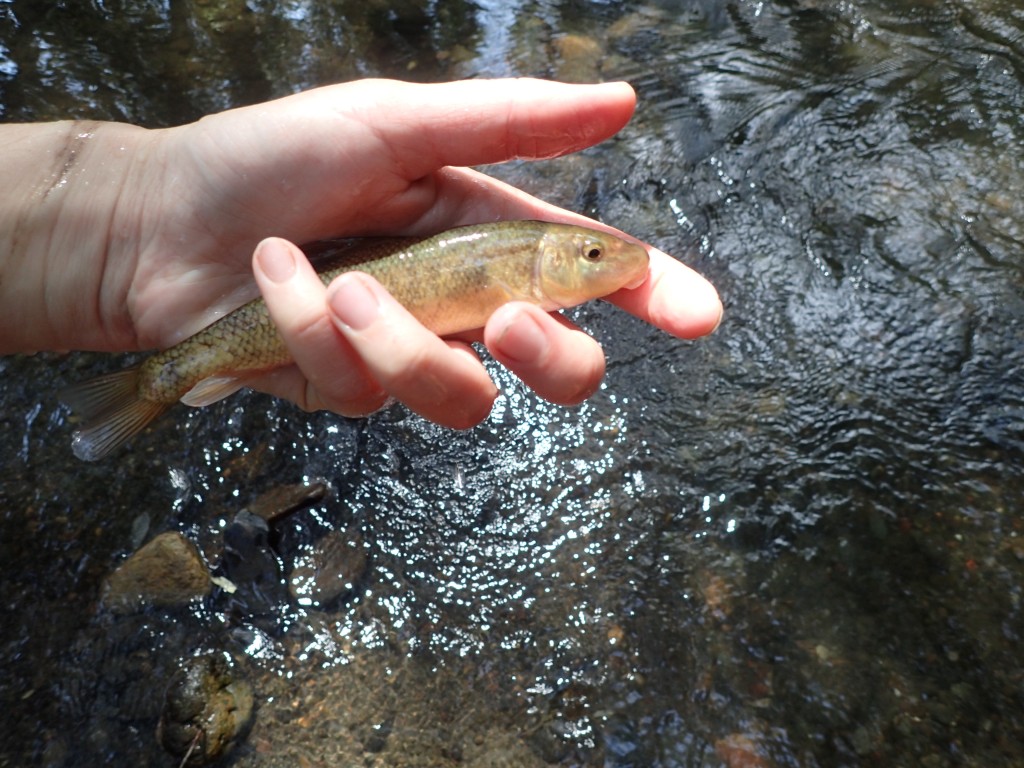 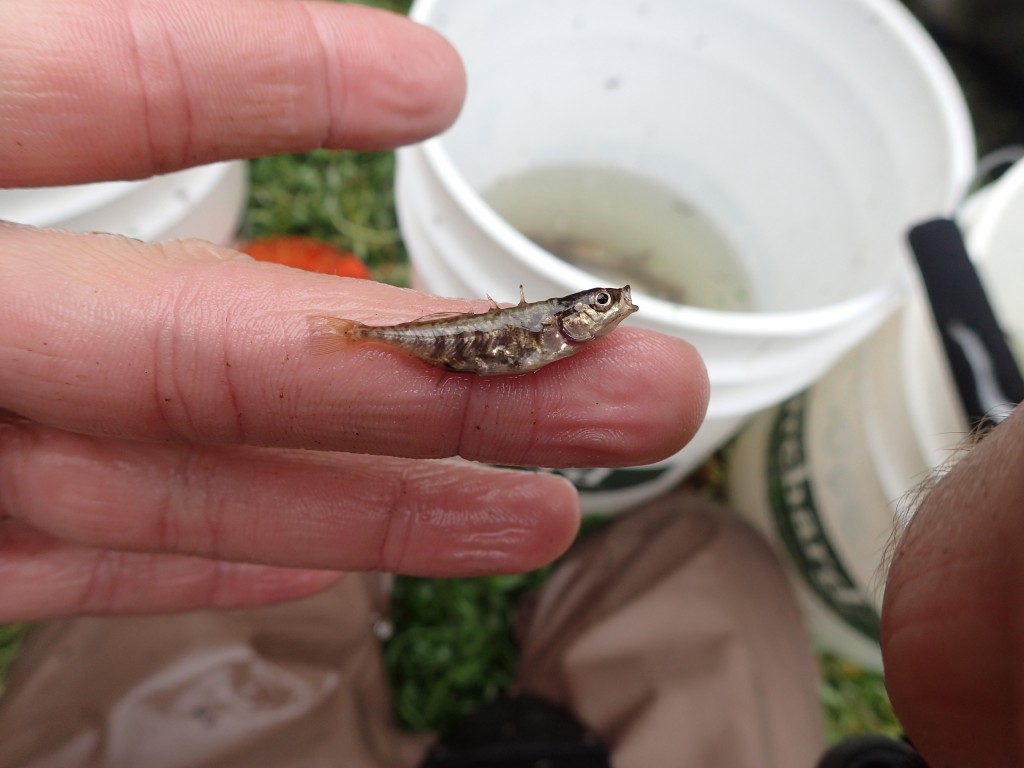 Additionally, we collected samples from the stomachs of pikeminnow to better track what pikeminnow are eating. While you can directly look at the stomach contents, this only captures a very short timeframe of their diet. Analyzing the relative abundance of different food sources will help the Estuary Program make more informed decisions on the level of pikeminnow management in the watershed. 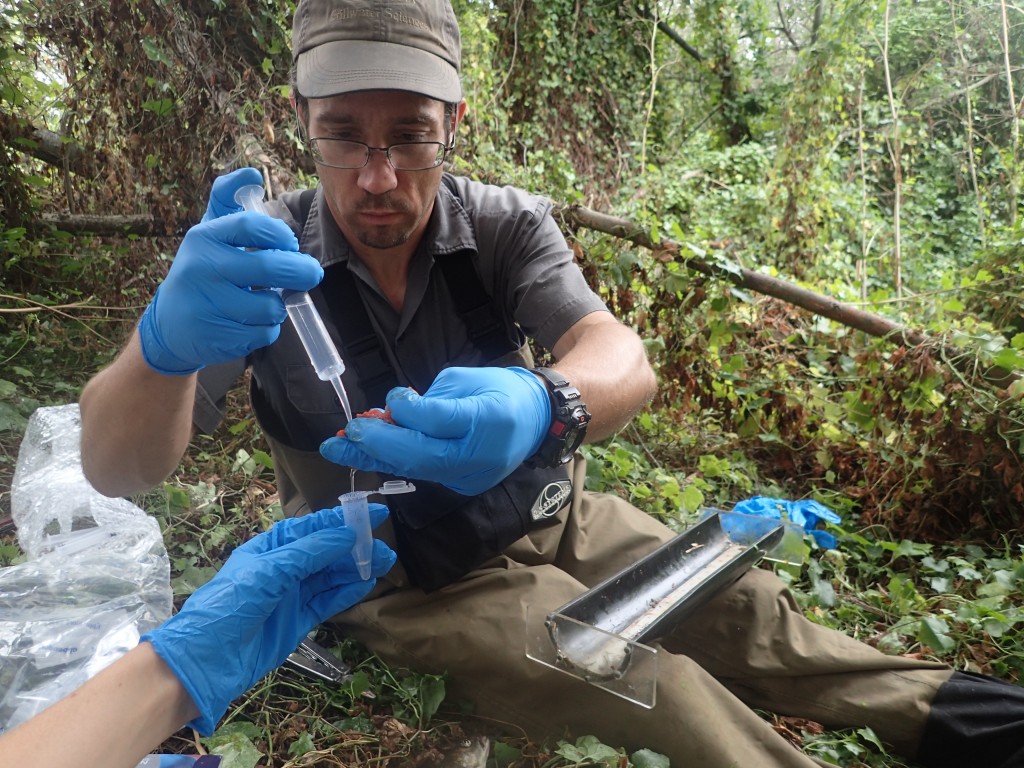 Ken Jarett of Stillwater Sciences collects a stomach sample to better understand the diet of pikeminnow.

For the past three months, we have been monitoring eelgrass beds in the estuary to learn more about the flowering and seeding patterns of the different eelgrass beds in Morro Bay. In September, we started seeing blades mature enough to be collected. Immature seeds are white or light green in color, with a soft outer coat. This is often the stage at which we collect the seed. 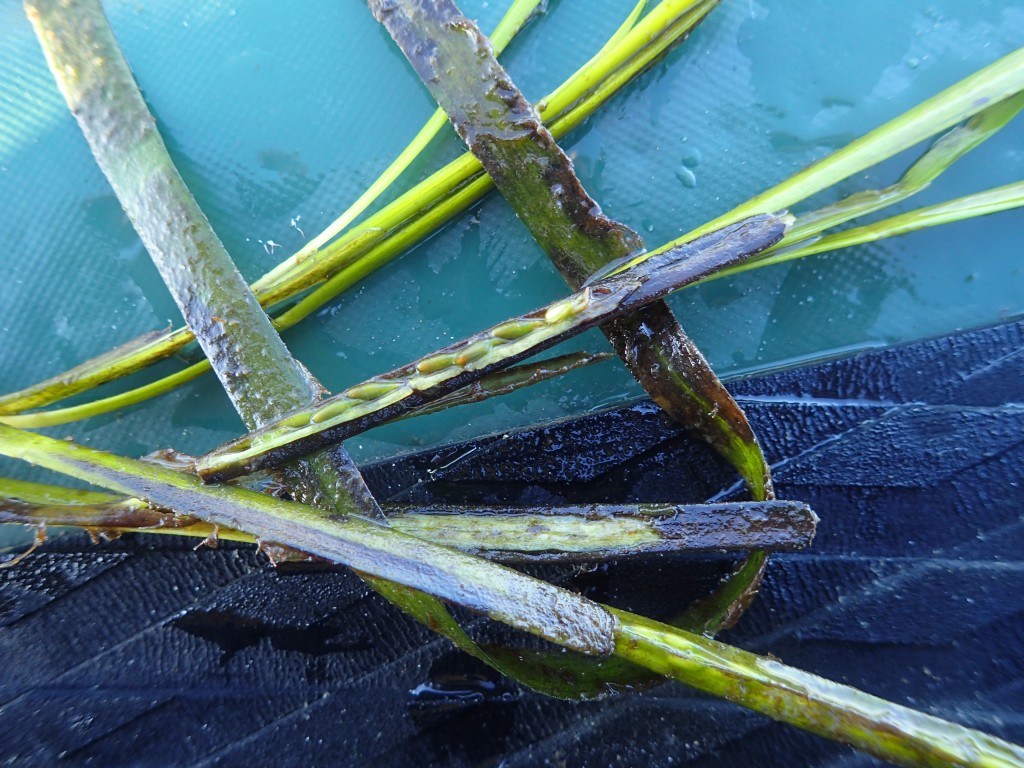 We hold collected seeds in mesh bags in the estuary until they mature. Mature seeds have a hard, longitudinally ribbed coat and can vary in color, including olive, dark brown and black.

Collected seeds are held in mesh bags in the estuary until they mature. Mature seeds will have a hard, longitudinally ribbed coat and can vary in color, including olive, dark brown and black. 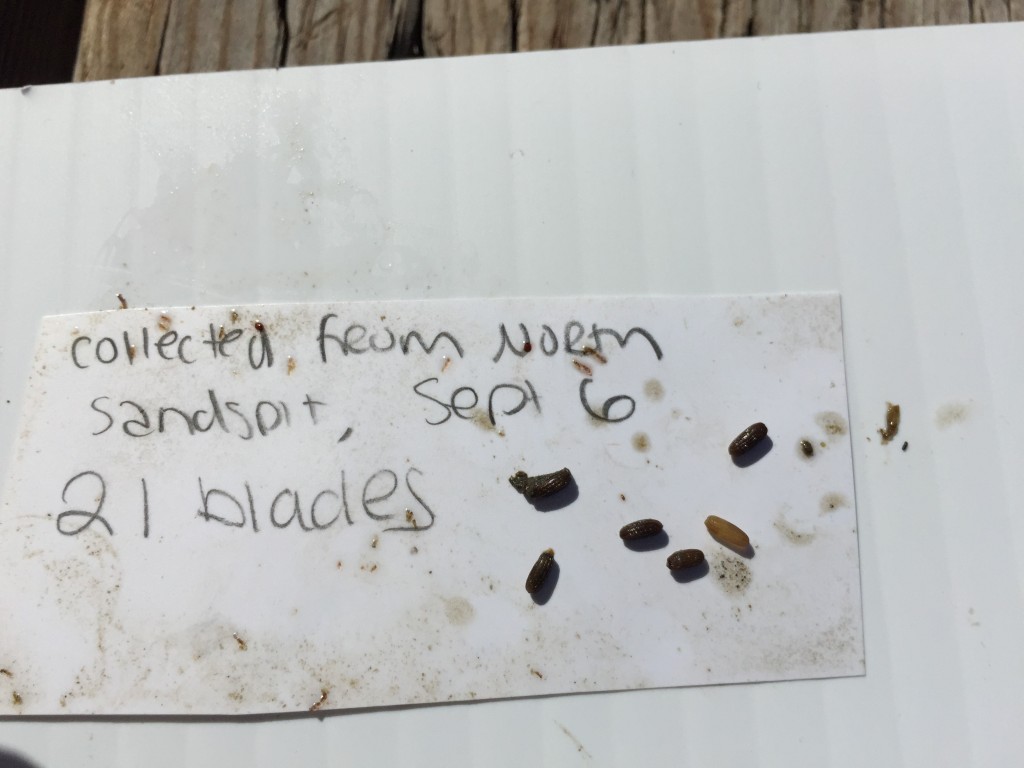 These seeds were collected a few weeks ago and held in a bag in the estuary. After a few weeks, the seeds mature and are released from the blade.

Once the seeds are all mature, we will plant them at two different locations in the estuary. There are different methods for planting eelgrass seeds. Broadcasting them by hand from a boat or putting them inside mesh buoys and allowing the currents to disperse the seeds are common, low effort methods. We will be putting the seeds in burlap seed bags and anchoring them to the sediment. This will allow us to monitor the success of our seeding efforts and the data we collect will help inform future restoration projects.

Despite all the windy days in September, staff was able to head out on a calm, glassy morning to start looking at sites where we could put the eelgrass seeds, and to check on eelgrass beds. 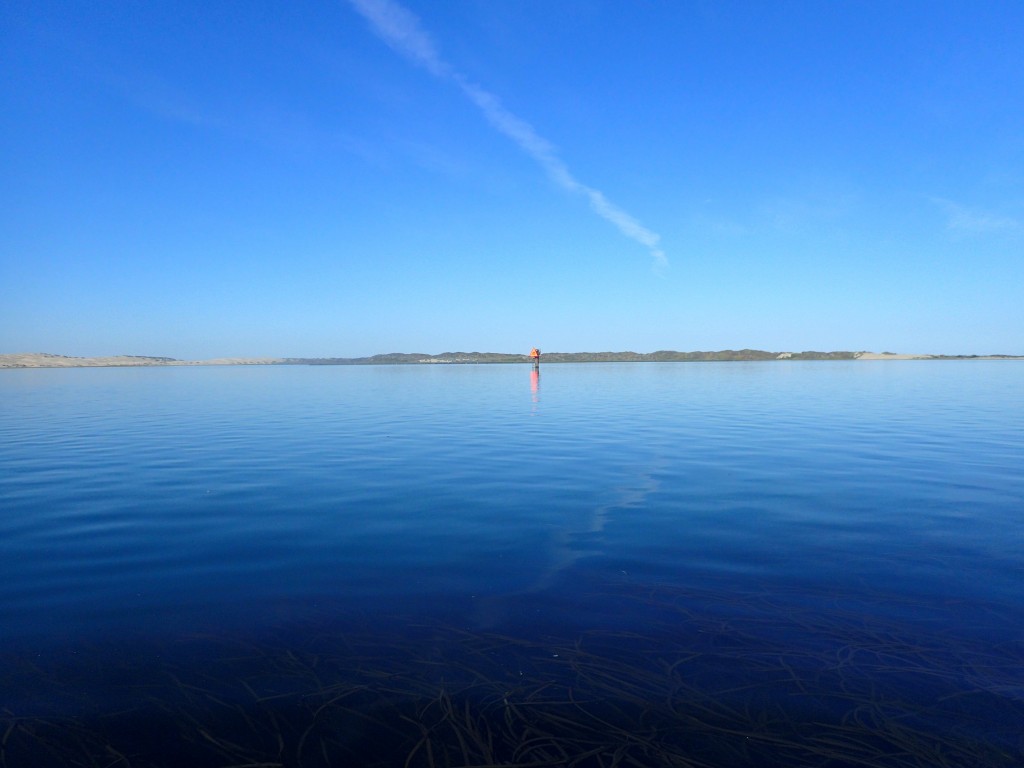 Mornings, before the windy has picked up, on higher tides typically have the best conditions for checking on eelgrass from paddleboards. You can see eelgrass in the lower portion of this photo. 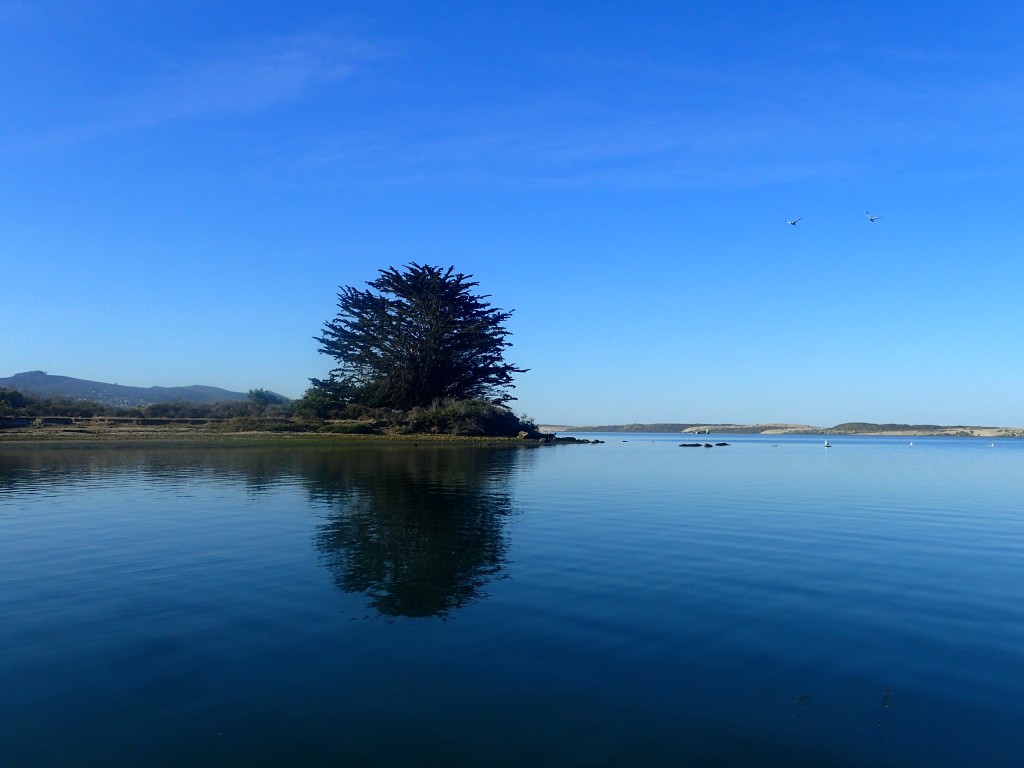 Terns, the birds in the upper right corner, were extremely active when we were out.

It was also a great day to bird watch back by State Park Marina.