Fulfilling our mission to protect and restore the Morro Bay estuary for people and animals requires a lot of hard work in the field. Read on to see what our staff and volunteers have been up to during the month of December. We’re looking forward to another productive year of field work in 2018!

In 2005, with help from the Battelle Marine Sciences staff, we established four permanent transects for annual eelgrass monitoring in Morro Bay. These transects were chosen to represent different zones of the bay and capture differences between these zones. We added an additional transect in 2012. In December, we monitored these five transects and established a sixth one.

While only a few of our permanent transects had eelgrass, all of them had eelgrass close by, which is an improvement from past years.

Many people know the joys of tidepooling along rocky coves such as Windy Cove or out in Montana de Oro, but did you know the mudflats are also a great place to look for intertidal critters?

December was a great time for spotting the opalescent nudibranch, Hermissenda crassicornis, in depressions in the mudflats. Did you know that some nudibranchs such as this one eat animals such as anemones? When doing so, they transfer the anemones’ stinging cells, called nematocysts, into their own body and make it part of their defense system. Check out the Monterey Bay Aquarium for more fun facts about these bay residents.

Along with plenty of Bulla snails, we also saw a few snails that we think are Lewis Moon Snails, Neveritas lewisii. 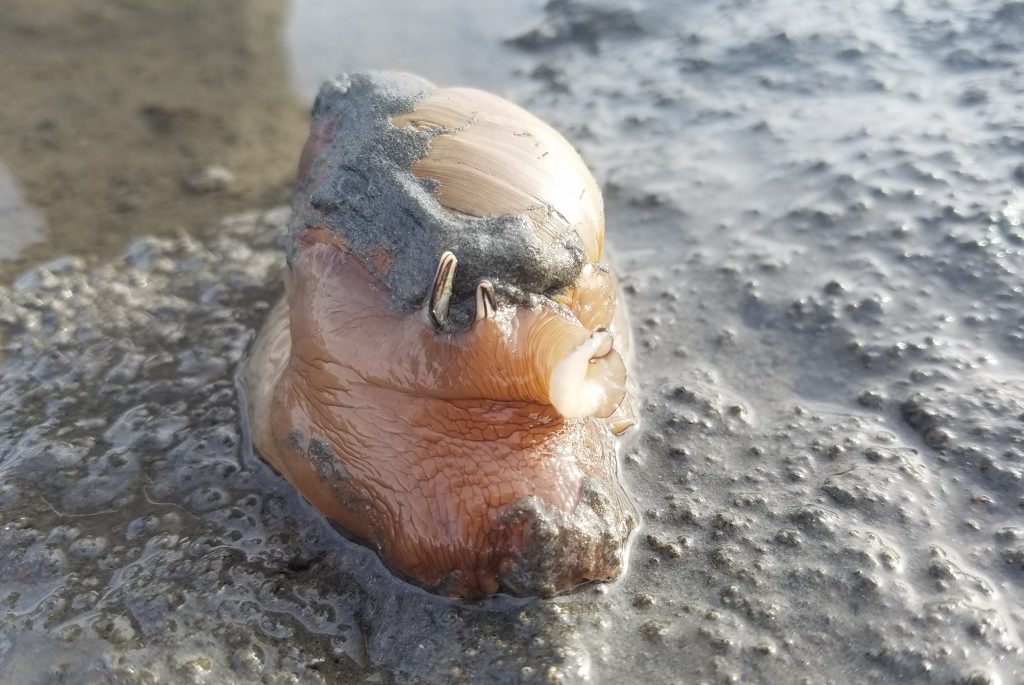 We also saw plenty of these white egg ribbons.

Since 2004, the Estuary Program has been mapping submerged vegetation, such as eelgrass and algae. Data for the maps  aerial flight that takes a multi-spectral image of the bay.

To help with this mapping effort, staff went out with a GPS unit to identify and verify locations of vegetation, like macro algae in the bay or other plants in the salt marsh. This will help validate the data collected in the aerial image.

Don Baldwin, an Environmental Scientist with the California Department of Fish and Wildlife (CDFW), conducted a redd survey training. A redd is a nest dug in the gravel by fish in the family Salmonidae, such as salmon and steelhead trout (Oncorhynchus mykiss). Spawning fish dig out a depression in the stream bottom to lay their eggs. That depression is called a pot, and the area where dislodged material is swept downstream is called a tailspill.

This quick video from Oregon State University shows a salmon digging a redd, followed by footage of the eggs developing into fry.

Redds are recognizable to a trained eye and counting them can help us estimate the population size as well as the distribution and timing of migrating adults (Meffe 1986, Gallagher et al 2007).

These surveys are conducted by our partners at the California Department of Fish and Wildlife, California Conservation Corps, Central Coast Salmon Enhancement, AmeriCorps Watershed Stewards Program and NOAA Veterans Corps. With the training from CDFW, all crews will be conducting surveys in an accurate manor, consistent with protocols developed for the state of California.

Staff also attended a training hosted by Central Coast Salmon Enhancement on conducting low flow and high flow measurements. This training was attended by many of our project partners and will help ensure that crews are collecting flow measurements in accurate and consistent manners across the county.

Subscribe to our weekly blog to have stories like these delivered to your inbox each week. Starting next week, we’ll post a series about what the Estuary Program and our partners accomplished in 2017.