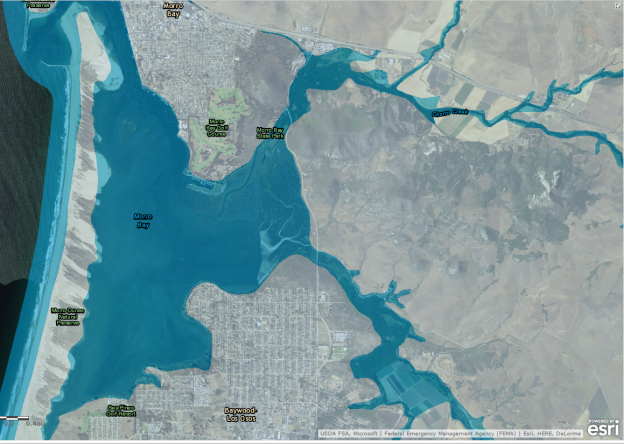 The Estuary Program recently developed a climate vulnerability assessment for our estuary, which analyzes the likelihood and severity of climate change effects and presents an adaptation action plan to address them.

This blog post summarizes some of the conclusions from the effort.

According to EPA analysis, average global temperatures are expected to increase by between 2°F and 11.5°F by the year 2100, depending on future carbon emissions levels. The impacts from these warming temperatures, according to EPA, will be increased drought, increased intensity of storms, sea level rise, warmer waters, and ocean acidification. Projections from the Intergovernmental Panel on Climate Change (IPCC) also show heat waves and extreme precipitation events becoming more frequent and intense in many regions of the United States.

The results of climate models vary and are not able to tell us about climate variations from year to year. What they can do is give a general sense of what climate may look like in the future.

All of the models that we examined show an increase of at least 3.6°F for the average maximum temperature around downtown Morro Bay and the Morro Bay estuary. The first map below shows the average maximum annual temperatures from 1981 to 2010. The second map below shows the results of a model, developed by NOAA, that predicts average maximum temperatures if carbon emissions start leveling off now. (Other models, which you can find in the full report, are less optimistic, including a scenario in which carbon emissions continue to increase at the current level.) 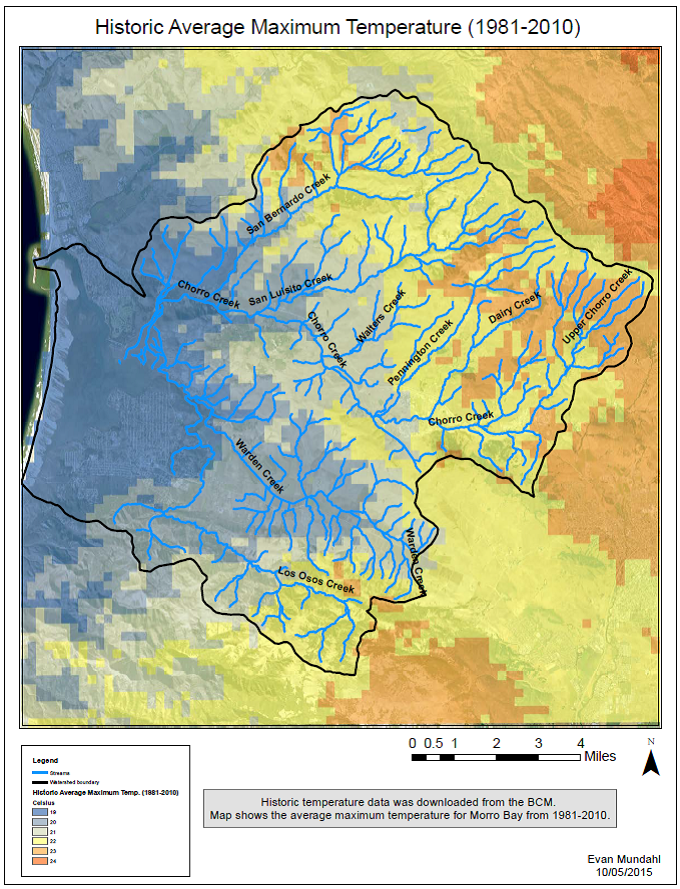 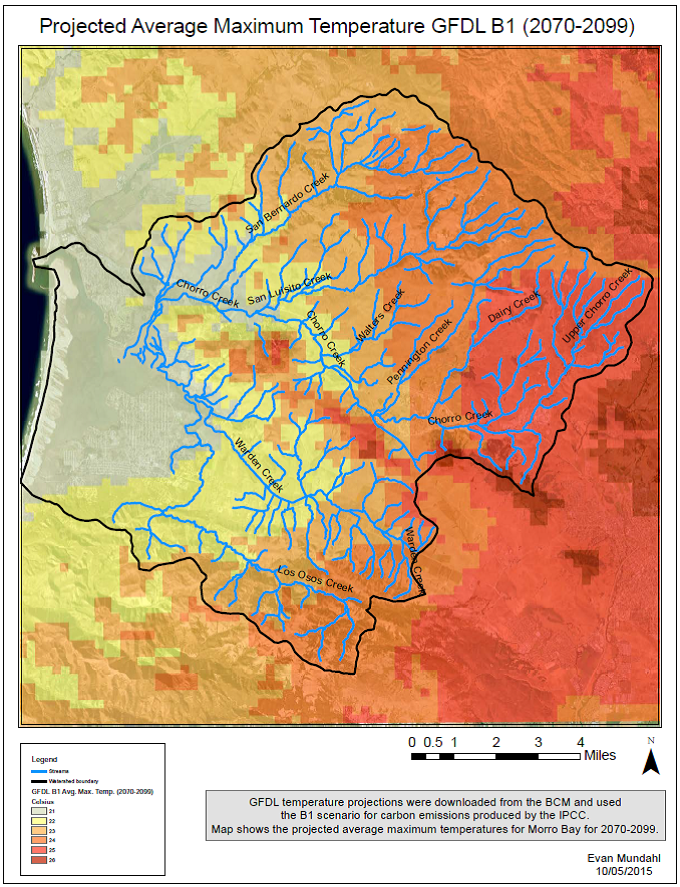 Another potential impact of rising global temperatures is an increase in high intensity storms that can alter the hydrology and ecology of the Morro Bay watershed. Increased temperatures and drier conditions will also modify the biological and ecological processes in the bay and affect the people and animals that rely on them. The NOAA model  mentioned in the previous section also predicts that the aridity, or water deficit, due to the stress on plants and soil from warmer temperatures will increase between 9.5 and 20.9%.

These impacts will likely combine in a way that further stresses native ecosystems and water cycles throughout the Morro Bay watershed and estuary.

The extent and impacts of sea level rise

As temperatures increase with carbon emissions, the oceans will continue to warm and acidify. Because warm waters expand, sea levels will rise.

While one might assume sea level rise means disaster for the Morro Bay area, models do not show major risks to housing infrastructure around the bay. Analysis for San Francisco Bay estimated that over the past 100 years, sea levels had increased regionally by half a foot. The IPCC estimates that sea levels will rise between 1.3 and 2.7 feet by the year 2100.

In 2014, NOAA created a “Digital Coast Sea Level Rise and Coastal Flooding Impacts Viewer,” which displays the areas affected by sea level rise. The figure below shows current sea levels. Blue areas are regularly inundated by tides, and the orange areas are inundated irregularly by king tides (the highest tides of the year). 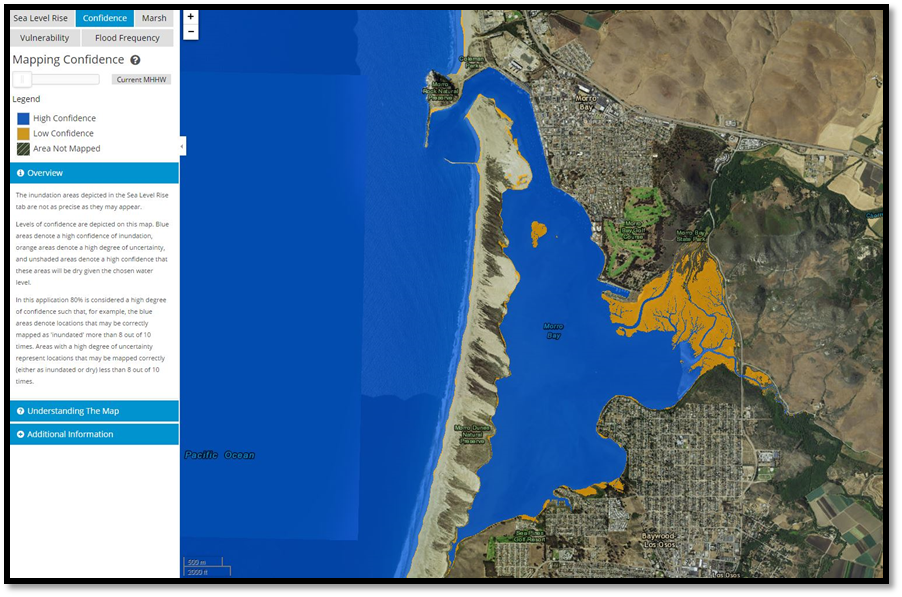 The NOAA viewer also shows the estuary and surrounding area following a two-foot sea level rise. Much of the salt marsh would be below water. 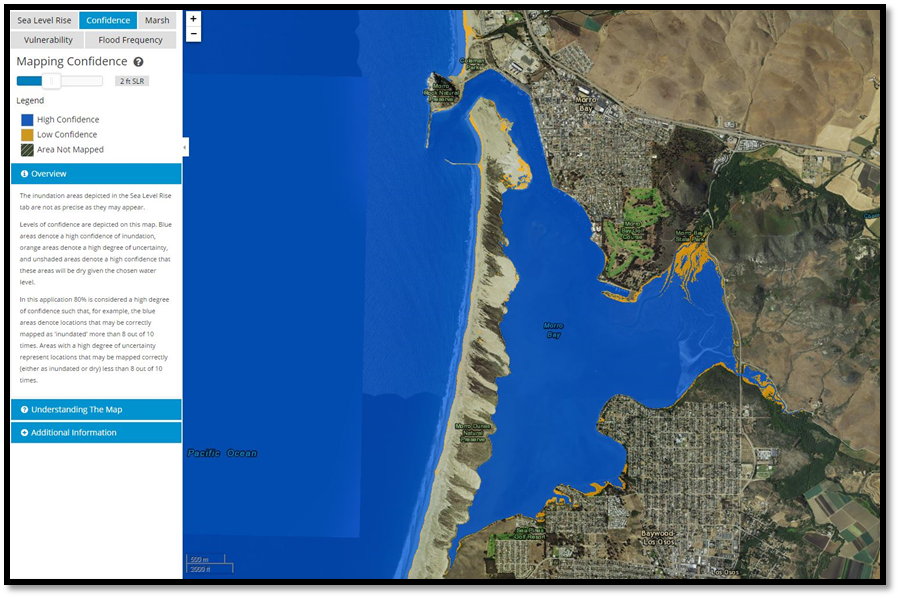 The NOAA mapping tool shows general areas that are vulnerable to sea level rise, but may not accurately depict the extent of the rise in water levels. According to the mapping tool, the most endangered areas are South Bay Boulevard and its bridges and Sweet Springs Nature Preserve. However, these models do not include changes in elevation of the bay. Observations have shown that over time, accelerated sedimentation has raised the elevation of the estuary and bay, which means that the waters may rise higher than predicted by these models.

Another concern is the combination of flooding events and sea levels rise. Looking at the FEMA flood prone area map and the sea level rise maps from NOAA allows us to hypothesize flooding effects. Areas most vulnerable to flooding and sea level rise seem to be agricultural land and open space upstream of South Bay Boulevard. The portions of the map depicted in light blue are areas impacted by a 100-year flood event. 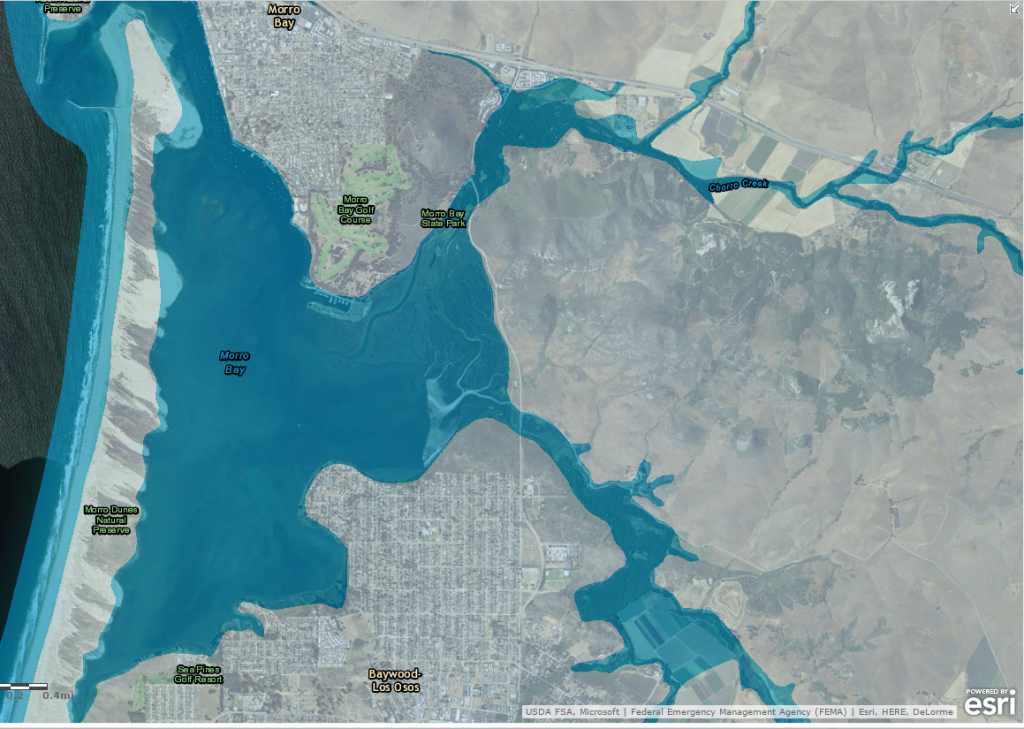 Knowing the possible changes and effects that climate change may have on the estuary and watershed will allow us to better prepare for an uncertain future. Through climate-smart restoration projects and other mitigation efforts, the Morro Bay National Estuary Program will help the estuary and its watershed become more resilient for the changes ahead.

Please see our Climate Vulnerability Assessment for more details and a full list of sources. We will continue to update you about our efforts to mitigate the effects of climate change.

A special thanks to the Environmental Protection Agency’s Climate Ready Estuaries Program, whose funding made possible the Climate Vulnerability Assessment for the Morro Bay estuary.