If you’ve been to the Estuary Program Nature Center, you’ve probably seen our Saving Steelhead exhibit. Many visitors stop and watch, entranced, as the fish dart by.

It’s important for us to share the steelhead’s story.

Steelhead (Oncorhynchus mykiss) are a special kind of trout. While they are genetically identical to rainbow trout, their behavior sets them apart. Rainbow trout spend their entire lives in freshwater. Steelhead trout hatch in freshwater streams and then migrate to the ocean. They grow big at sea, before returning to the stream where they hatched to spawn.

Steelhead are a sensitive species. They need clean, cold water, and healthy streambeds with gravel, boulders, and woody debris for shelter in order to thrive. And, because of the many miles they travel during their life cycle, they need to be able to count on good water quality over time and throughout the watershed—from the upland streams where they hatch and spawn, to the main tributaries, into the brackish waters of the estuary, and out into the ocean beyond.

This video explains more about what steelhead need and how well our local streams support them.

Every year, we have the privilege of displaying these fish for visitors. We receive the eggs in February from the California Department of Fish and Wildlife, who breeds them for educational purposes, including the Trout in the Classroom program. We keep them as long as they remain small enough for the tank to be a healthy environment for them.

After that, we request a permit to release them. (Remember: never release fish or other animals anywhere without a permit—the permitting process ensures that the release location is safe for the animal, and that the animal will not harm the habitat it’s released into. It is never okay to release a domesticated animal into the wild.) This year, we were granted permission to turn the fish loose in Lopez Lake. Our Restoration Projects Manager and her daughter made the trip.

First, they carefully caught the fish and stored them in a chilled and aerated cooler. This ensured that the fish had enough oxygen and stayed cool for the journey. 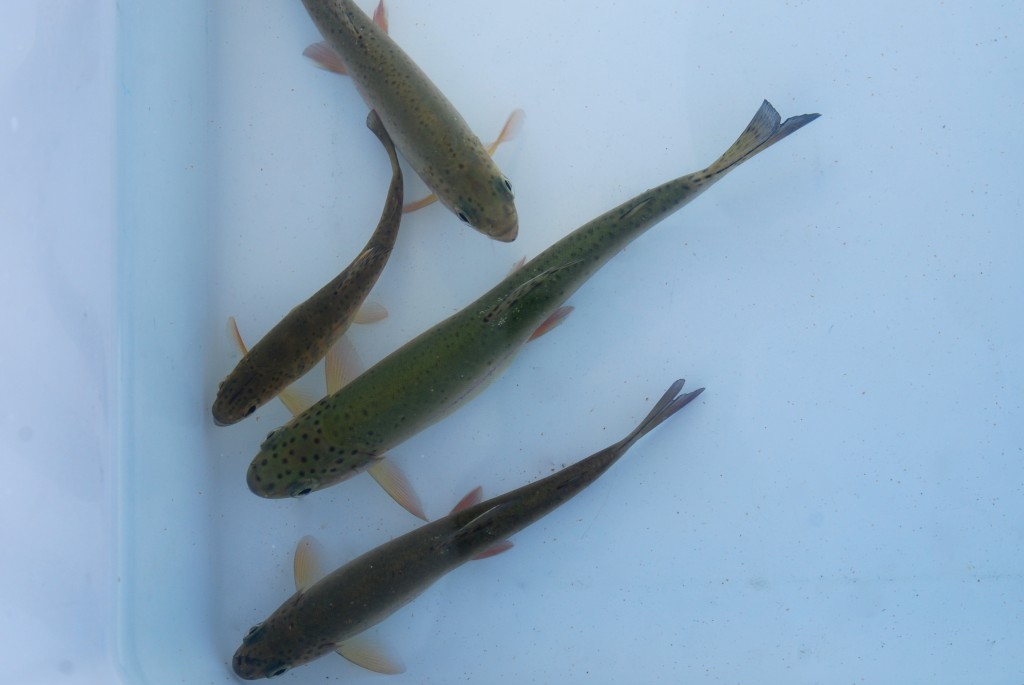 When they arrived at Lopez Lake, they were happy to see that the fish had traveled well. 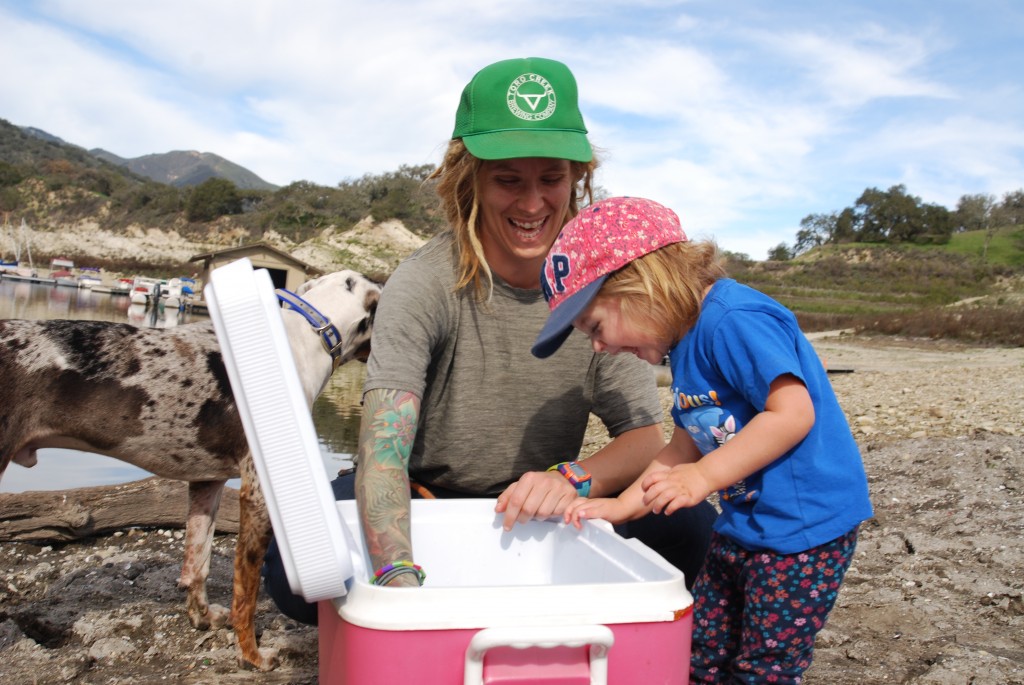 They transported the fish to the water by hand. 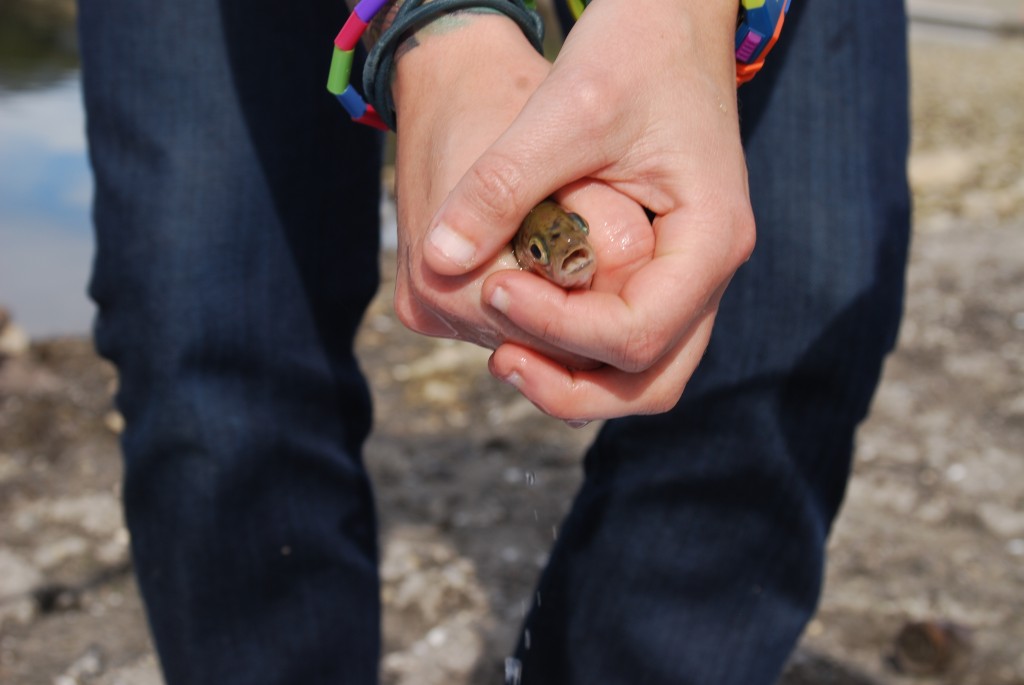 And all four fish swam away, becoming part of the web of life in this local lake. 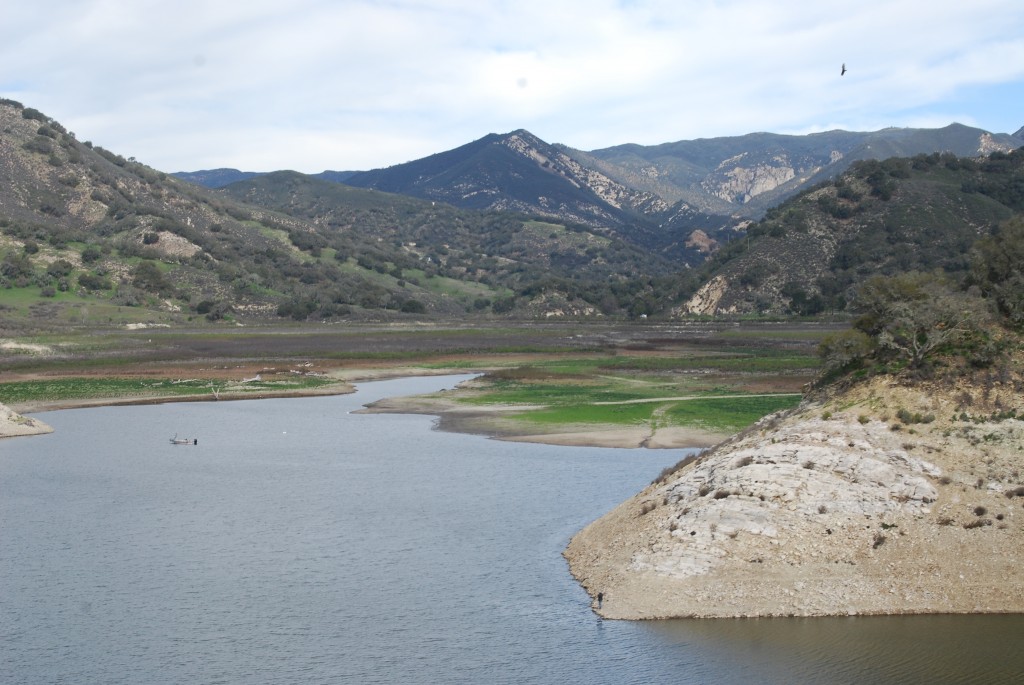 In February, we received a new batch of eggs, which were hatched at the California Department of Wildlife’s Mount Shasta Hatchery on January 12. We removed them from their protective netting, and placed them in a basket in the exhibit tank.

Not long after that, the fish began to hatch.

At this life stage, the newly hatched fish are called alevin. The yolk sac from the egg remains attached to the alevin’s stomach, providing the nutrients they need to survive. At this point, they are unable to swim. They remain the same orange color as their eggs and yolk sacs, which makes them very visible and vulnerable to predators. In nature, they would remain up to 30 centimeters down in the gravel, where they were laid and fertilized as eggs, in order to protect themselves. This is one reason why it’s important to keep fine sediment out of our waterways—it can filter down into the gravel and smother both eggs and alevin. In the Nature Center, we kept the alevin safe in a protective basket.

The yolk sac shrinks as the alevin develops eyes, teeth, and a digestive system. Once the fish use up the nutrients in their yolk sacs, they transition into fry, the next part of the lifecycle. They quickly vibrate their tails, rising to the top of the water, and snapping their mouths open and closed. They close their gills and push air into their swim bladders to inflate them for the first time. After this, they can swim free, and they begin to search for food. The fish in the Nature Center are at the fry stage now.

We hope you will visit us often in order to watch them grow!

Did you catch the steelhead bug?