State of the Bay 2017: Eelgrass, Sedimentation, and Climate Change

Our State of the Bay 2017 report contains data that the Estuary Program and our partners have collected over the years. We release this report every three years to answer common questions about the health of Morro Bay and its watershed. Last week’s blog post discussed the condition of water quality in the bay and creeks. This week, we address eelgrass, sedimentation, and climate change.

Eelgrass is a blooming underwater grass that puts down roots in sandy soils. Its long blades form an underwater forest, offering wildlife a place to rest, find food, and spawn. It also dampens wave action to keep bay waters clear and helps hold the bay floor in place. Due to the important role of eelgrass in the Morro Bay ecosystem, the Estuary Program has been mapping it for the last 15 years. Since 2007, our efforts have tracked a rapid loss of eelgrass. 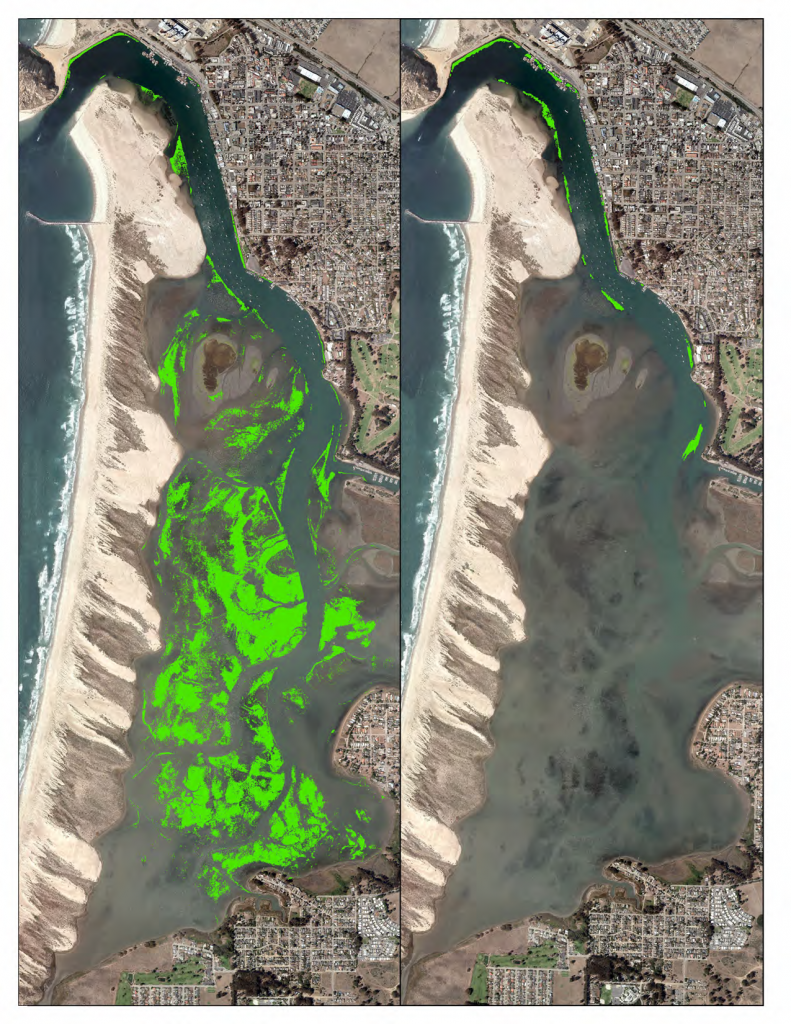 The maps above show the 344 acres of intertidal eelgrass detected in 2007, as compared to the 2015 map where less than 20 acres were detected.

Although the exact reasons for the decline are not known, it is likely a combination of factors that potentially includes the build-up of fine sediment in the back bay, changing water temperatures, and lower oxygen levels. The Estuary Program has partnered with Cal Poly and others to focus efforts to more closely track the condition of remaining eelgrass and study potential causes of the decline.

Our efforts this year include a small-scale experimental eelgrass planting effort to assess the success of different planting methods and locations. During our monitoring, we have mapped the return of small patches of eelgrass in locations where it has not been seen for several years.

Here in the West, the impacts of climate change have direct effects, including drought, floods, severe storms, and wildfires. To better understand how climate change might affect habitats and ecosystem processes in our estuary and watershed, the Estuary Program conducted a climate vulnerability assessment. All climate models agree that the Morro Bay climate will become drier and warmer in the future. Other impacts to our local climate include warmer surface and water temperatures, drier conditions, more intense storms, and continued sea level rise. 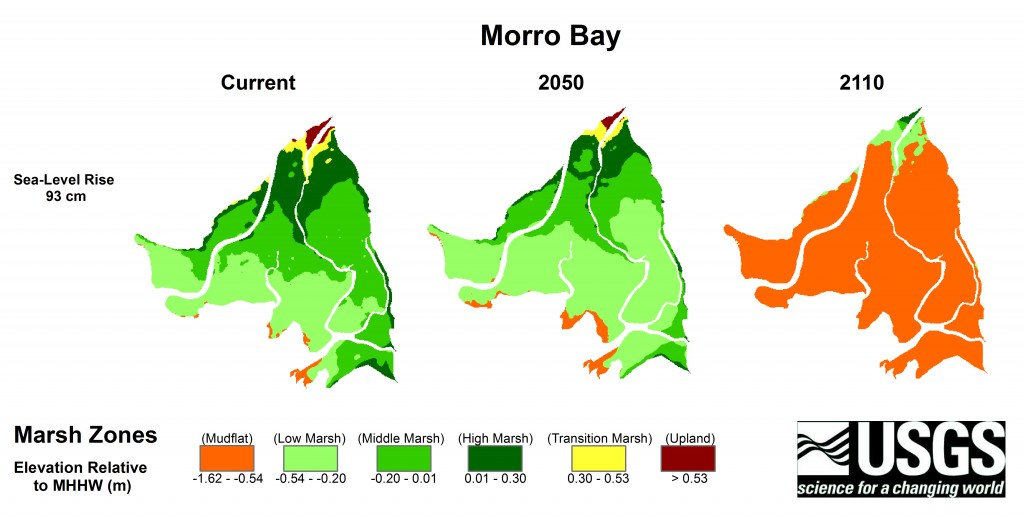 The maps above show how models predict our salt marsh area of the bay will change over the next century. This work was conducted by USGS and UCLA, in a study looking at tidal marsh impacts at estuaries up and down the California coast. These models assume a moderate amount of sea level rise at 93 centimeters or about 36 inches by 2100. As the waters rise, Morro Bay would lose marsh as the area converts to mudflat. This shift in conditions means loss of habitat for fish, birds, and other animals. It also means loss of ecosystem services like protection from flooding and damage from storm events.

By studying potential changes and effects of climate change, we can better prepare for potential impacts to the estuary and watershed. Our climate vulnerability assessment focused on how we can adapt our management to maintain the resiliency of our coastal community.

Morro Bay is an estuary, an area where freshwater from land mixes with the salt water of the ocean. These areas fill with sediment over time in a natural geological process. However, human activities such as development and poor land management can accelerate the rate of sedimentation, as can natural phenomena such as wind blowing sand from the dunes into the bay. 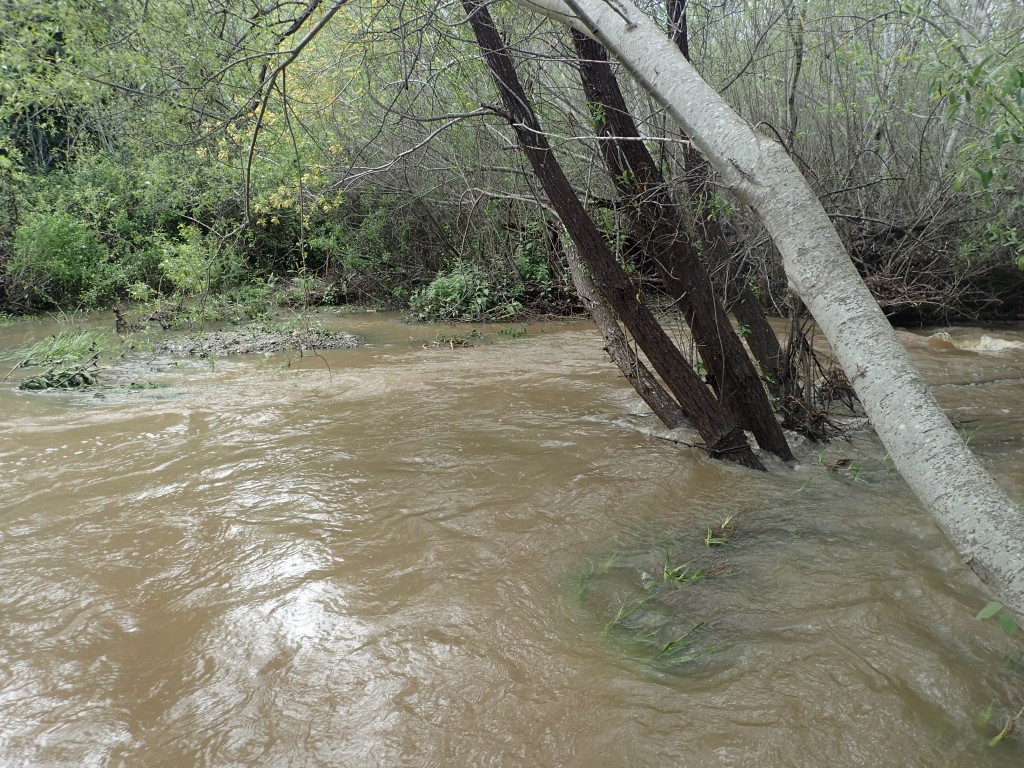 This sedimentation is of concern because it alters the depth, size, and habitat types in the bay. It decreases the overall amount of water that the bay can hold. The bay mouth must be dredged each year to ensure that the harbor remains navigable, otherwise sediment would build up and prevent the passage of ships. 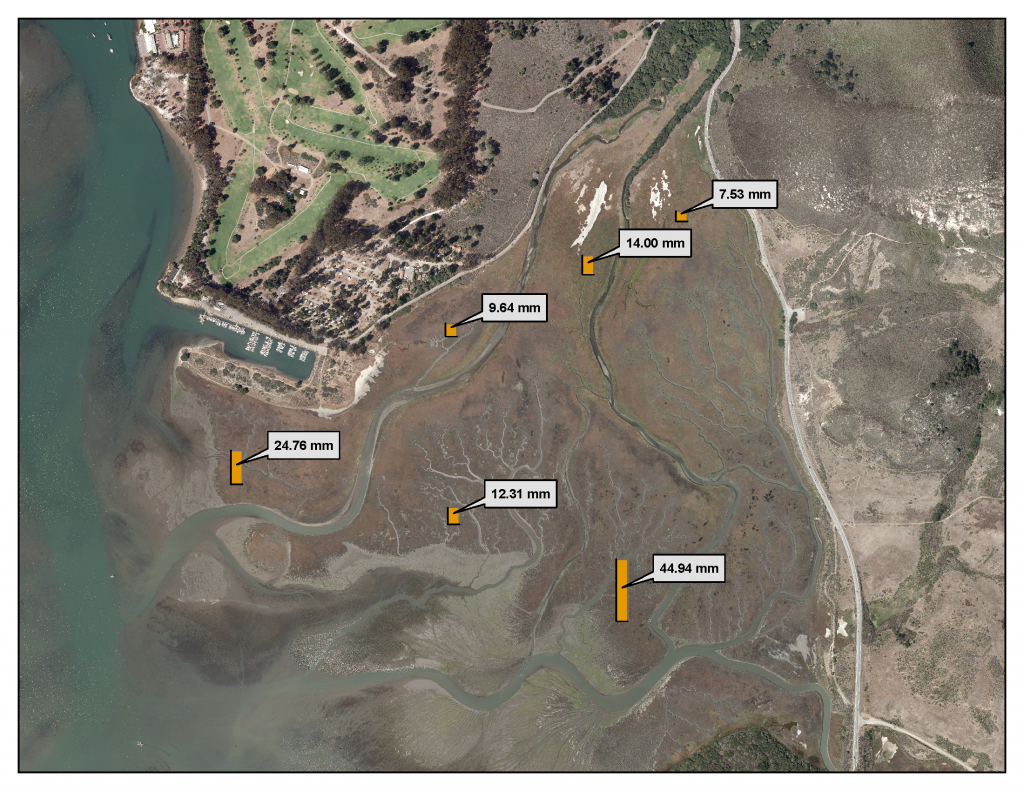 The map above shows the six sediment monitoring stations established in the salt marsh by the Estuary Program, in partnership with University of San Francisco (USF). During this study, USF collected highly accurate measurements of marsh elevation, and the map shows the millimeters of average elevation increase between 2004 and 2015. The rate of change in the low marsh (those stations farther from the Chorro Creek outlet) are similar to recent rates of sea level rise, around 2 to 3 mm per year.

Stopping Erosion at the Source

Erosion from roads can be a significant source of sediment in the streams in the Morro Bay watershed, which eventually drain to the estuary. With funding from the Water Board, the Estuary Program partnered with landowners such as Cal Poly, Camp SLO, and the US Forest Service to repair dirt roads throughout the upper watershed. We conducted repairs at 58 locations, treating over 11 miles of road. This effort will prevent 1,225 tons of sediment from reaching local creeks and the estuary each year for the next decade. (That’s a total of over 12,250 tons.)

For more information on these questions, view the full report and attend our State of the Bay events through April and into May of 2017

Tune in next week for a discussion of habitat protection, steelhead, and birds.