Estuary Program staff and volunteers were hard at work in the field this past month. Fieldwork in July focused on preparing for a second round of eelgrass restoration.

As you may recall, we collaborated with CalPoly on a similar effort in March, 2017. This effort was conducted earlier in the year than in past efforts in hopes that the eelgrass would become established before large macroalgae blooms, which typically occur during the summer here in Morro Bay.

After four months, we were seeing growth and expansion of eelgrass at our forebay plot (or, eelgrass had expanded outside of the plot). The midbay spot was not looking as successful, but still had some remaining shoots.

Based on these results, we decided to do a second transplant in the summer to test if season affects restoration success. For this summer effort, we planted eelgrass in the same areas in the forebay and midbay, using the same technique.

For this project, we needed negative tides. This season, the good negative tides were really early in the morning, so our field days started at 5 a.m. as we tried to catch the tail end of these tides.

The field days were very similar to our last effort. This time, we decided to start  by collecting eelgrass on Friday morning, holding it overnight underwater in the bay, and then having one group transplant these shoots the following day, while a second group worked on harvesting another batch. This meant we needed a few more hands out on the bay to help out. This would not have been possible with the help of 14 truly dedicated volunteers, willing to come help out before sunrise!

The first step was to harvest eelgrass from the healthy bed that extends from Coleman Beach down to Target Rock.

After collecting the shoots, we processed them up on shore. We trimmed the eelgrass blades to a set length to help us track their growth, counted the total number of shoots, and took photographs. The first day, we collected enough eelgrass for 6 of our 9 plots, and held it overnight in the bay.

George Trevelyan of Grassy Bar Oyster Company generously agreed to give us early morning boat rides out to our transplant sites as well as to help plant eelgrass.

For this technique, we use PVC rulers to help space the eelgrass and garden staples to keep shoots anchored into the sediment. Pieces of plywood and boogie boards keep us from sinking too deep into the mud.

In total, we planted 9 new plots of eelgrass this July, with a total of 648 plants. We will be keeping a close eye on them to see how well this planting method has worked and if one season seems to be better for planting than others. 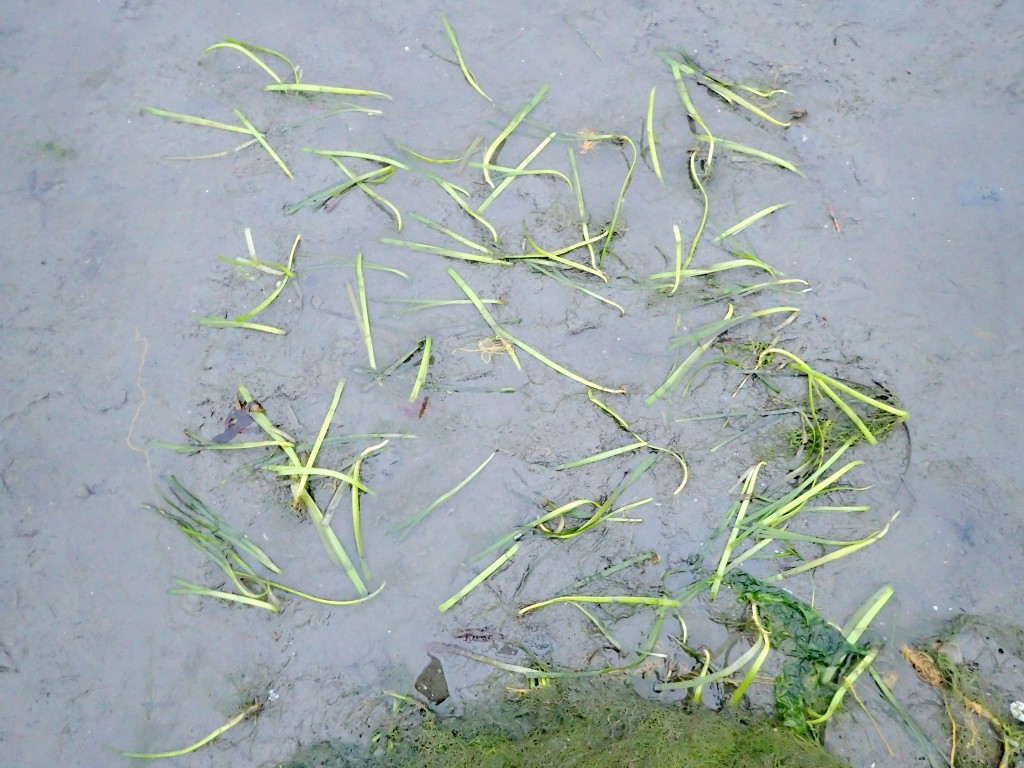 A newly-planted pot in the forebay.

Keep reading our blog to see how this project progresses.