King Tides and Morro Bay: A Glimpse into the Future

King Tides and Morro Bay: A Glimpse into the Future 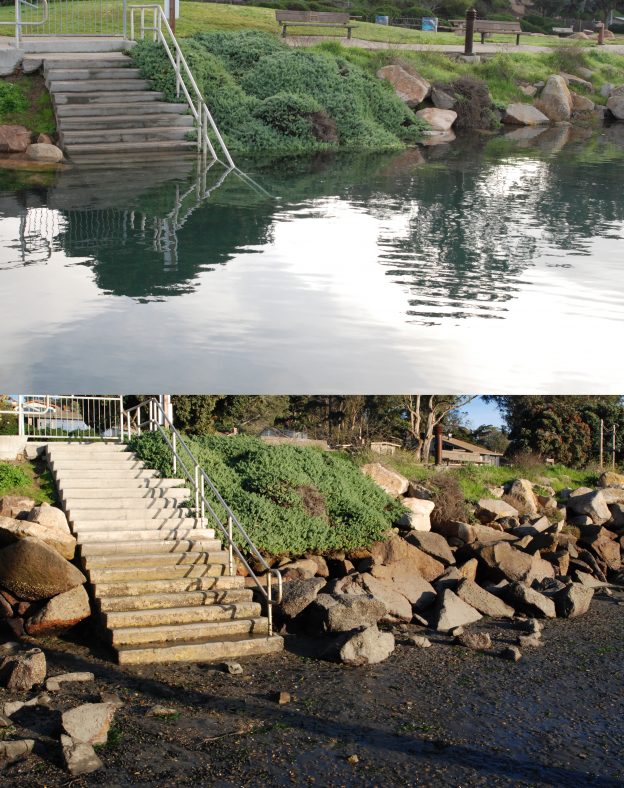 Have you ever wondered what sea level rise might look like in the future? The naturally occurring King Tides, the highest tides of the year, could provide some insight into that question. They occur annually during the winter when the earth, moon, and sun are all aligned and the earth is closest to the sun. (The astronomical term that describes when the earth is closest to the sun is the “perihelion.”)

King Tides push coastal boundaries by engulfing the bottoms of stairwells and raising the water level up to the very tops of piers.

King Tides in Morro Bay and beyond

The following photographs show what the extra-high King Tides and their corresponding low tides looked like in Morro Bay last year. 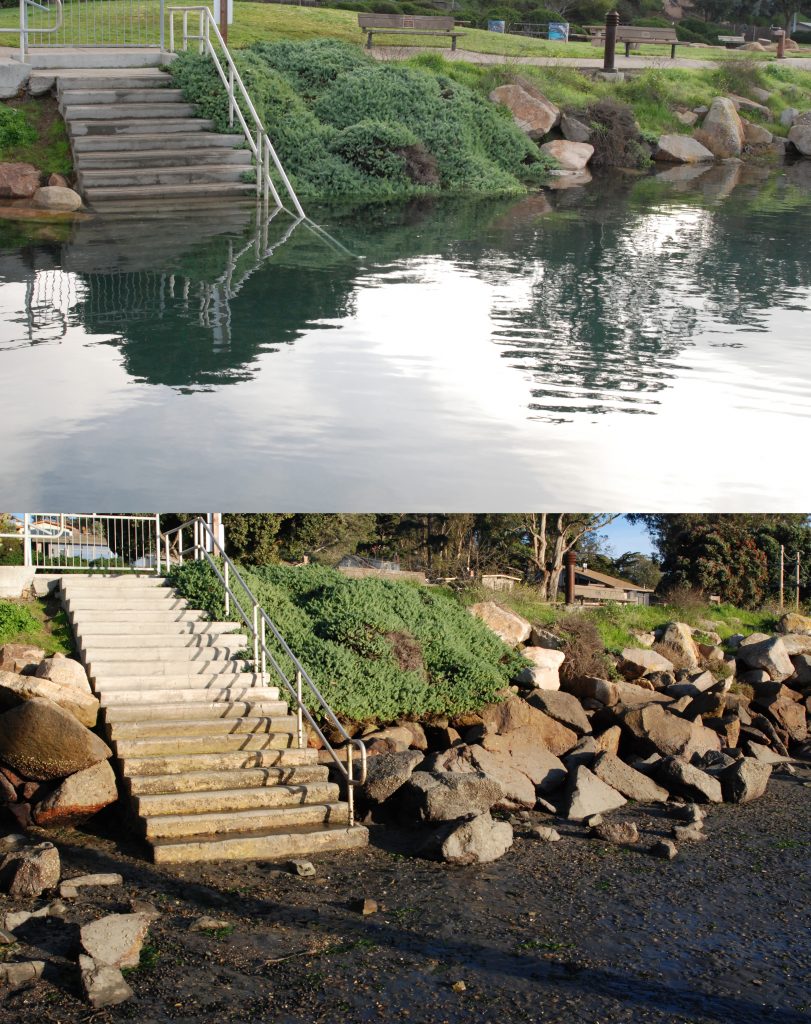 King Tides high and low comparison at the Tidelands staircase in Morro Bay. 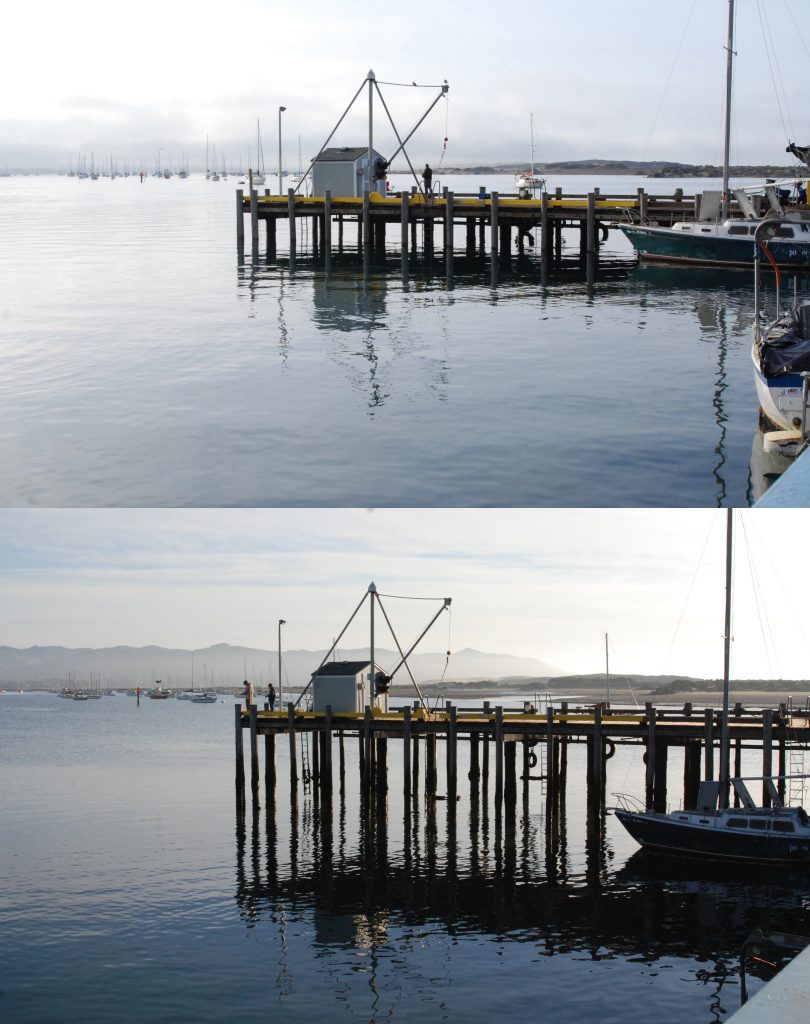 King Tides high and low comparison at the south T-pier in Morro Bay. 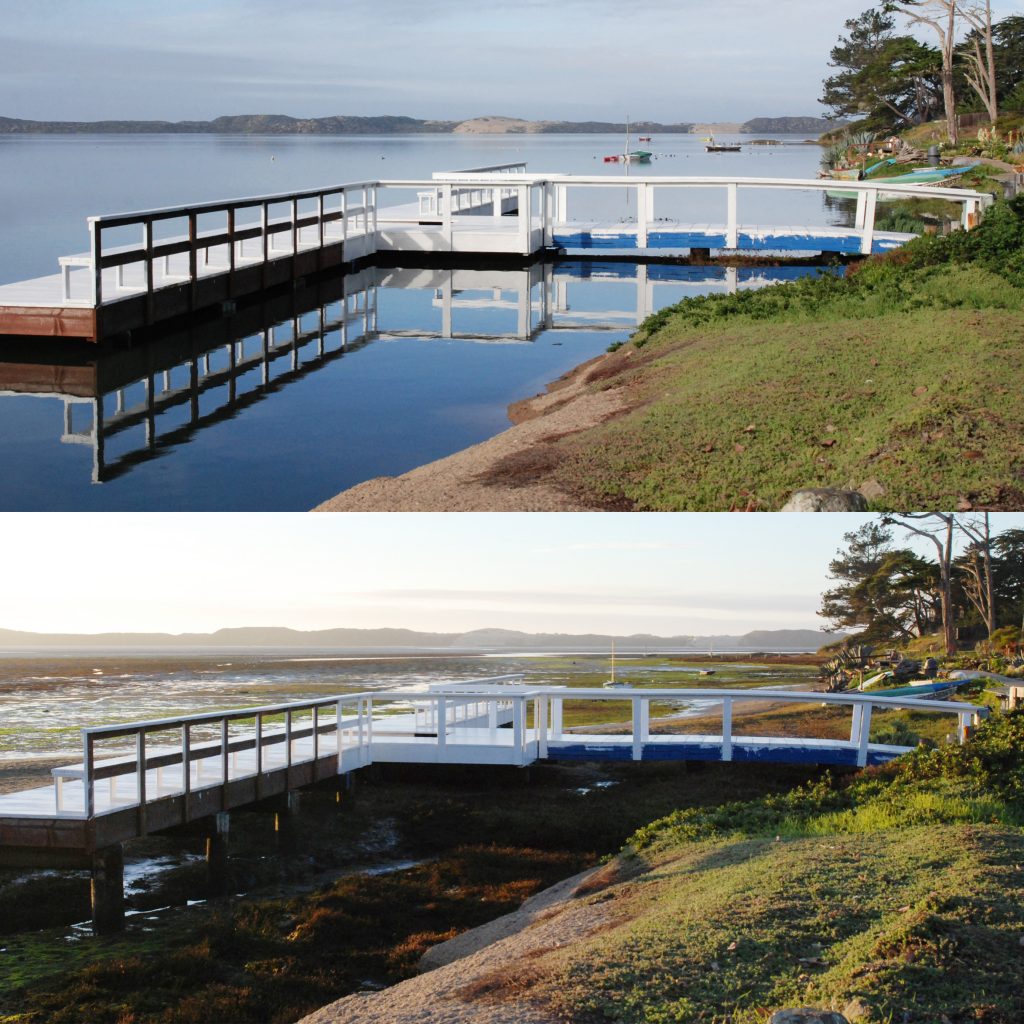 King Tides high and low comparison at the Baywood pier in Los Osos.

The video above shows a King Tide event at the Marine Room in La Jolla, San Diego.

King Tides show us the future

Even though these exceptionally high tides are a part of the normal yearly tide cycle, the King Tides of today might be the typical high tides of the future. This is because global sea level rise is pushing high tides further inland. Research indicates that sea levels have been rising at a rate of .14 inches per year since the ’90s, and the Intergovernmental Panel on Climate Change predicts that rates of sea level rise will continue to increase and that the global sea level will rise between 11 and 38 inches by the year 2100, enough to inundate many cities along the east coast. This assumes a rate of between .13 and .45 inches of sea level rise per year.

To find out how predicted sea level rise may affect Morro Bay, take a look at our Climate Vulnerability Assessment.

In order to address potential sea level rise impacts on coastal communities such as Morro Bay, scientists use a variety of tools, including the King Tides images database made available by the California King Tides Project. This is a citizen science initiative generated by you, citizens of the community!

Post your King Tides photos to enter our contest

It is easy to participate: just pick one of the days below, find a safe place to view the tides, and snap a picture during the morning high and evening low tides for contrast.

Then share your photos with the California King Tides Project and the Estuary Program! We want to make sure that the Central Coast is represented in the King Tides image database, so we’re holding a contest for the best King Tides photos taken in Morro Bay or Los Osos this December. The winner will receive a brand-new Morro Bay Estuary Octopus mug. 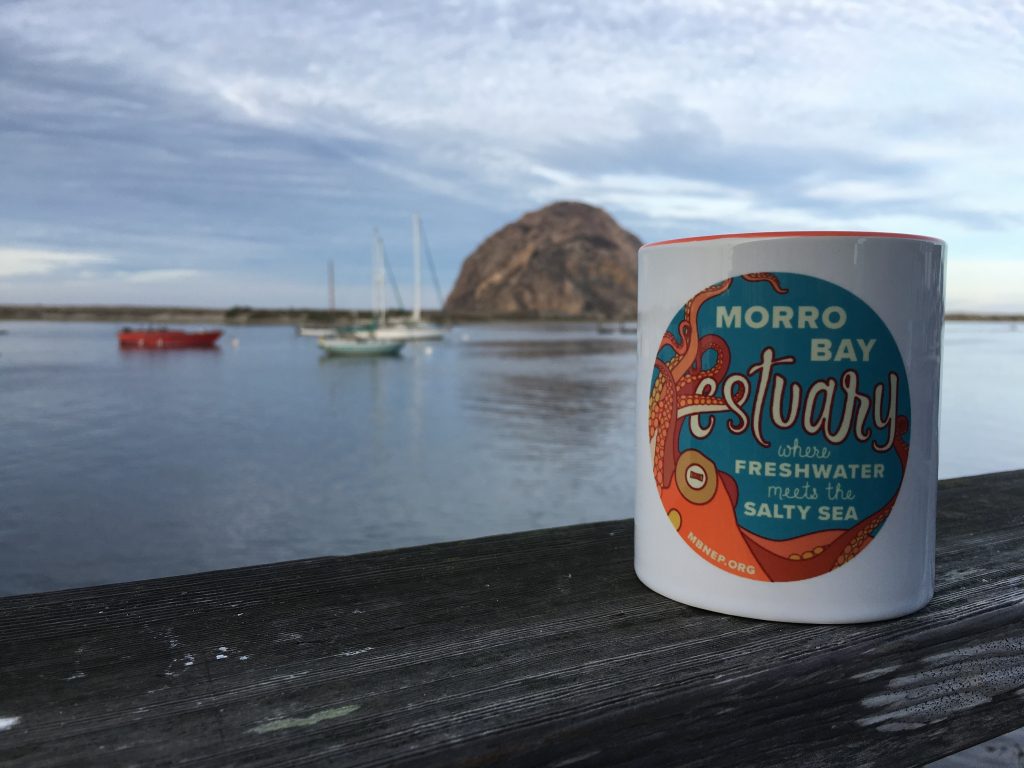 You can also buy your own mug and support the Estuary Program on Zazzle.

Please include the location and date of the photo, no matter where you post. We’d also love to hear why you decided to participate in the King Tides Project.

Here are some tidal charts from NOAA that show the dramatic tidal ranges during this King Tide event. To access these charts online, where you can change the dates and look at different locations, visit NOAA’s Tides and Currents Predictions website. 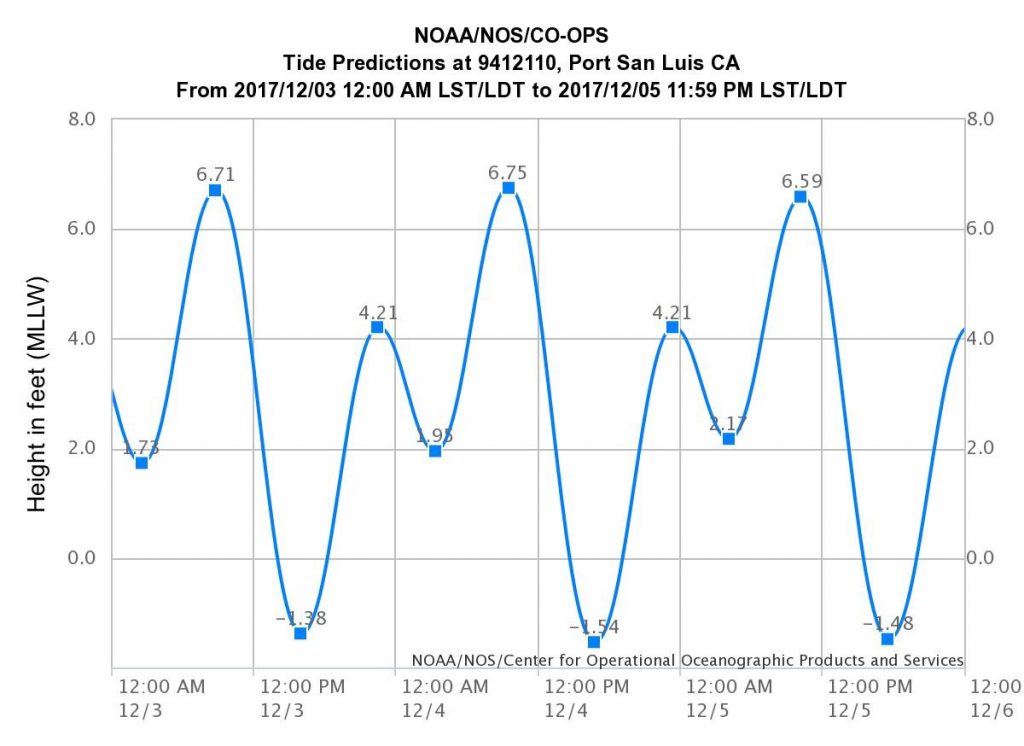 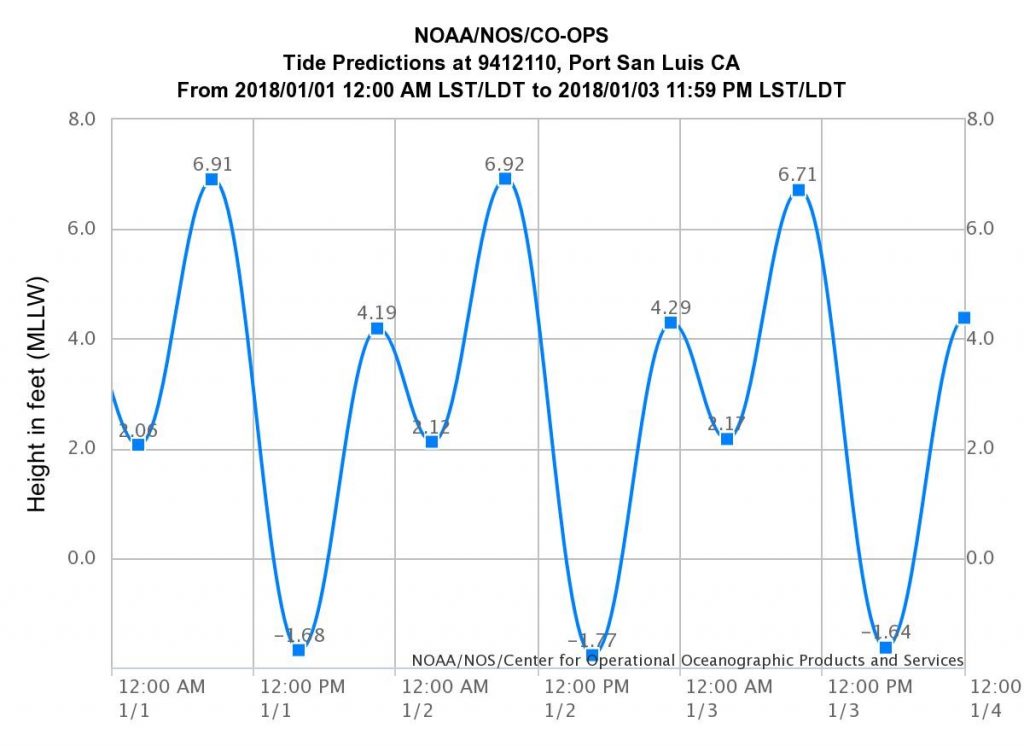 Notice how, in the span of 24 hours, two high tides and two low tides occur. This type of tidal cycle is called mixed semidiurnal cycle. The word mixed is used because of the different heights of the high and low tides, and diurnal means there are two high and two low tides each day. Most of the west coast of North America experiences this type of tidal cycle, while most of the east coast experiences semidiurnal tides, where the two highs and the two lows are roughly the same height. The gulf coast experiences only one high and one low tide each day.

These different tidal cycles are the result of a complex interaction between tides and the large continents on the planet. If the earth were a perfect sphere of water with only small land masses, everywhere on the planet would experience two equally proportioned high and low tides every day (semidiurnal tides). In reality, however, the large continents do not allow for these tides to move freely around the globe because they block the westward passage of tides as the Earth rotates. Therefore, different tidal patterns are established within or between ocean basins (the areas of ocean in between continents).

To learn more about these tidal cycles and why they exist, visit NOAA.

Thank you for participating as a citizen scientist and for doing your part to bring awareness to issues that impact our bay!