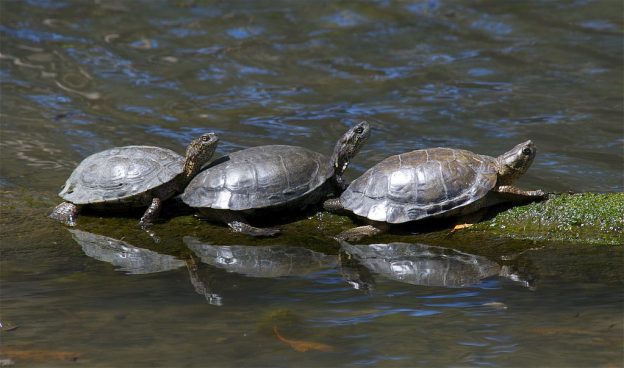 Tess is a Morro Bay native who has always loved the estuary and the wildlife that call it home. She studies biology and Geographic System Information at Cuesta College. After she receives her Associate Degree, Tess plans to pursue a Bachelor of Science in Environmental Management and Protection. Tess also enjoys writing, kayaking, and volunteering in the local community.

If you want to see a western pond turtle (Actinemys marmorata), you must be light on your feet. If they sense something strange, they will hide in defense. Populations of these hard-shelled animals are spread out along the west coast of North America, from parts of Washington state in the north all the way to Mexico in the south. Western pond turtles also reside in the Morro Bay watershed and are commonly found in Sweet Springs Nature Preserve in Los Osos. A small body of freshwater runs through the preserve and empties into the estuary. This body of water, particularly its slowest sections, provide habitat to western pond turtles. 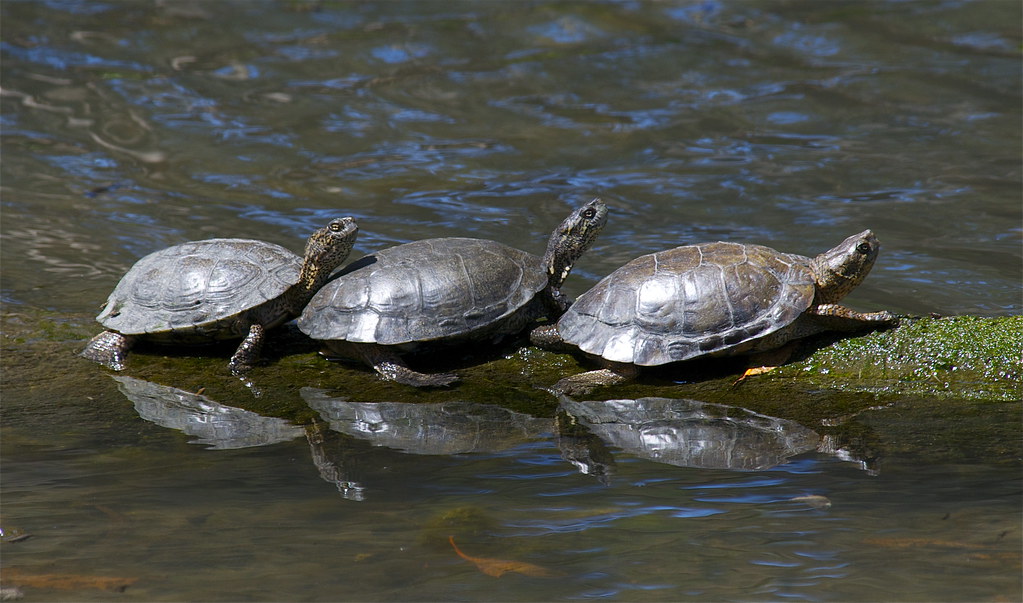 Though we are lucky enough to have these elusive creatures on the Central Coast, they have not been seen in Canada for decades. They were listed as extirpated under Canada’s Species at Risk Act when it became law in 2002. They currently rank as vulnerable to the threat of extinction according to the International Union for Conservation of Nature (IUCN). And, in California, they are considered a species of special concern.

What western pond turtles look like and how to spot them

Most western pond turtles make their homes in streams, rivers, ponds, lakes, or marshes. To spot one, scan the water, rocks, and nearby logs for a shallow-domed oval shell, around eight inches in length, with dark brown to olive coloring.

Western pond turtles can be difficult to see when they are partially submerged in the water, like this one. Photograph courtesy of J. Maughn via Flickr Creative Commons license.

These turtles are dimorphic, meaning that the males and females of the species are easy to tell apart. In the case of the western pond turtle, the males have pale yellow unmottled throats, while the females’ throats are mottled with darker color. This makes the two sexes easy to identify.

Just like their shells, western pond turtles are durable. They can live to be 50 years old and can survive out of the water for 200 days. These long-lived turtles take ten to twelve years to reach reproductive age. Once they do, females build nests for their future hatchlings on land. Most western pond turtles build their nests about 160 feet from the edge of the water in areas of clay or silt that are not too wet. Females lay between five and thirteen eggs per clutch, either once or twice a year.

Adult western pond turtles are omnivorous. Hatchlings and juveniles eat zooplankton. Later, when they are around three years old, they begin to consume a wider variety of foods including insects, small fish, tadpoles, frogs, algae, detritus, and plants.

Despite their strong shells, the western pond turtle must always be aware of predators. Raccoons, ospreys, other birds, and coyotes can sneak up on unsuspecting turtles to enjoy a crunchy meal. 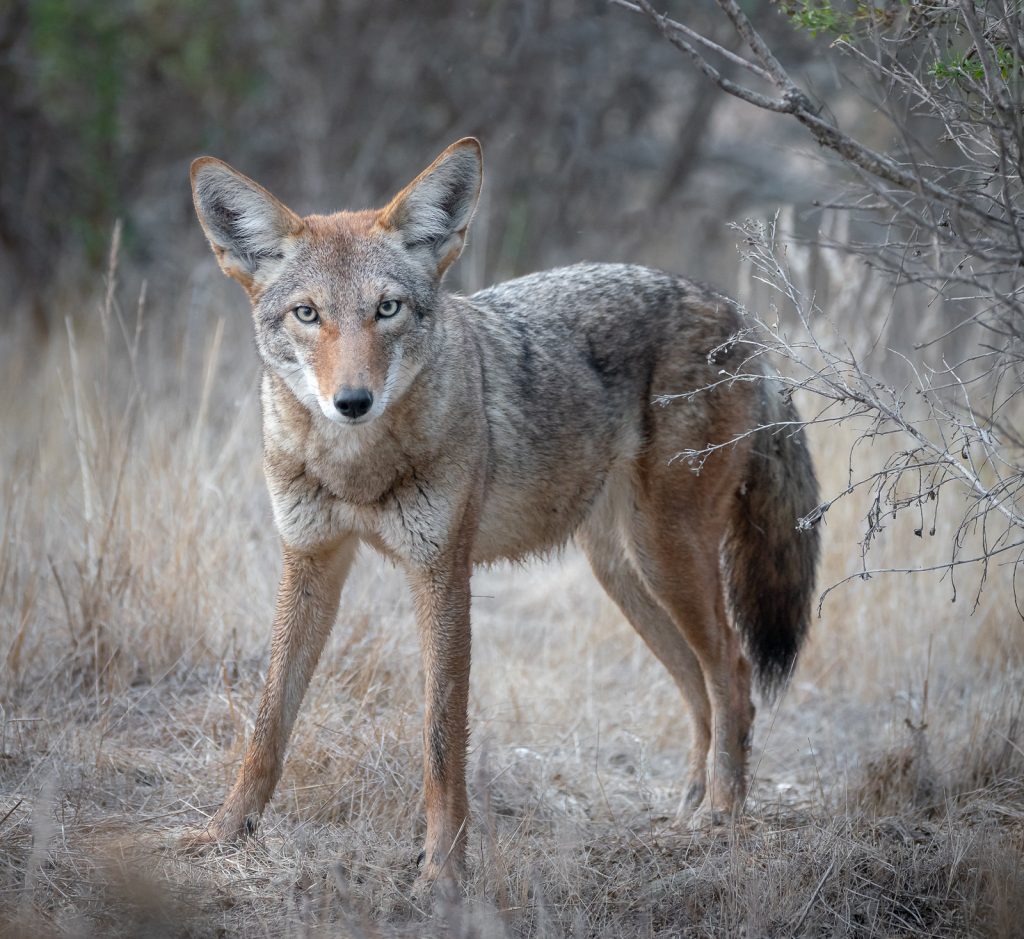 Photographer Alice Cahill spotted this coyote near the edge of the estuary. Coyotes and other predators sometimes feed on western pond turtles. Photograph by Alice Cahill sourced from Flicker, via Creative Commons license.

Invasive species, like the red-eared sliders shown in the picture below, also pose a threat to western pond turtles by competing with them for habitat and food. 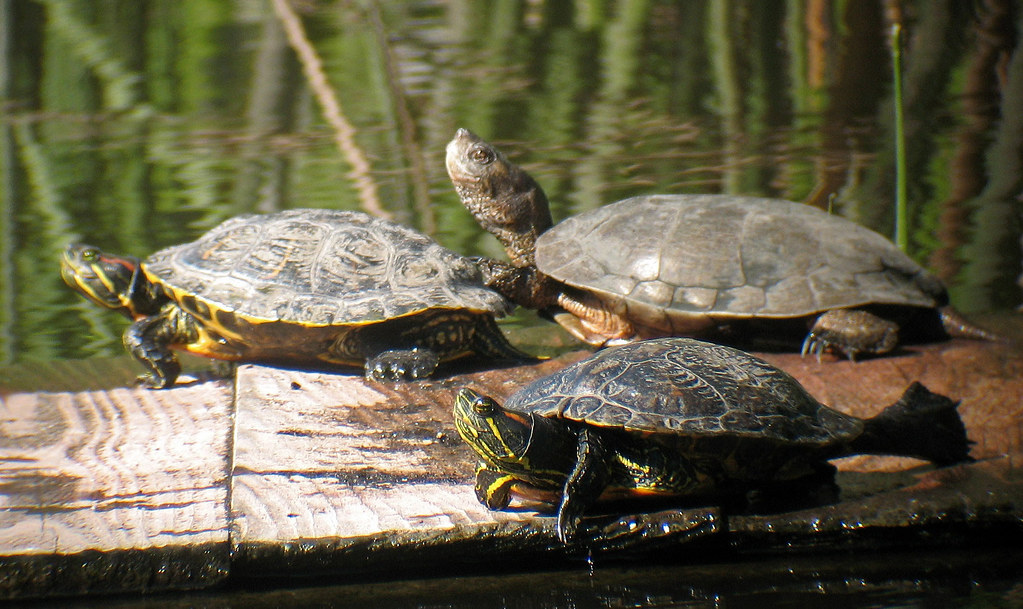 What you can do to help western pond turtles

To help prevent these turtles from becoming extinct locally, as they are now in Canada, you can participate in these easy day-to-day activities: