During June 2019, a group of fourteen spirited Cuesta College Marine Microbiology students came together under the kind and careful guidance of professors Laurie McConnico and Silvio Favoreto. The mission was to explore the Morro Bay Estuary and examine the local eelgrass population. We quickly learned that 97% of the eelgrass in the Morro Bay Estuary has been lost, and that eelgrass habitats can provide an estimated $87,000 in ecosystem services annually. We were excited to be a part of this class that allowed us to earn college credit and work on a real-life issue, instead of just reading about it in textbooks! Our goal was to carefully collect eelgrass samples, analyze the samples, and try to decipher what might be causing the necrosis in our estuary’s population. Specifically, we were hoping to determine if the slime mold Labyrinthula was present in the Morro Bay estuary and possibly contributing to the decline of the eelgrass.

This one-week short course began with professors McConnico and Favoreto zealously teaching us about the Morro Bay Estuary itself. We sat at lab benches on campus and absorbed Professor McConnico and Favoreto’s teachings like a sea sponge absorbing nutritious, plankton-rich saltwater. On the first day of this aquatic adventure class, we brushed up on our knowledge of estuaries.

An estuary is a body of water that is partially enclosed and protected, where the salty ocean water meets freshwater. Estuaries are vital ecosystems and nursery grounds, as they provide food and shelter from the harsh environment of the open ocean. Within the estuary are several habitats, such as:

At the end of the first day of class, we were very aware of the importance of estuaries in biological diversity, and we were excited to explore the different habitats while outdoors collecting samples and kayaking.

We were not sure if we would find the slime mold Labyrinthula in the Morro Bay estuary, but we know this organism can be associated with seventeen other species of seagrass. In some areas, like Washington, the mold is pathogenic and leads to wasting disease. In parts of Europe, it seems that the slime mold lives on the blades of the seagrass, without causing any harm. And so, we dove into collecting eelgrass samples (and for some of us, I mean that quite literally—see the photo below), hoping to learn a bit more about the role of Labyrinthula in the eelgrass decline in the Morro Bay Estuary. 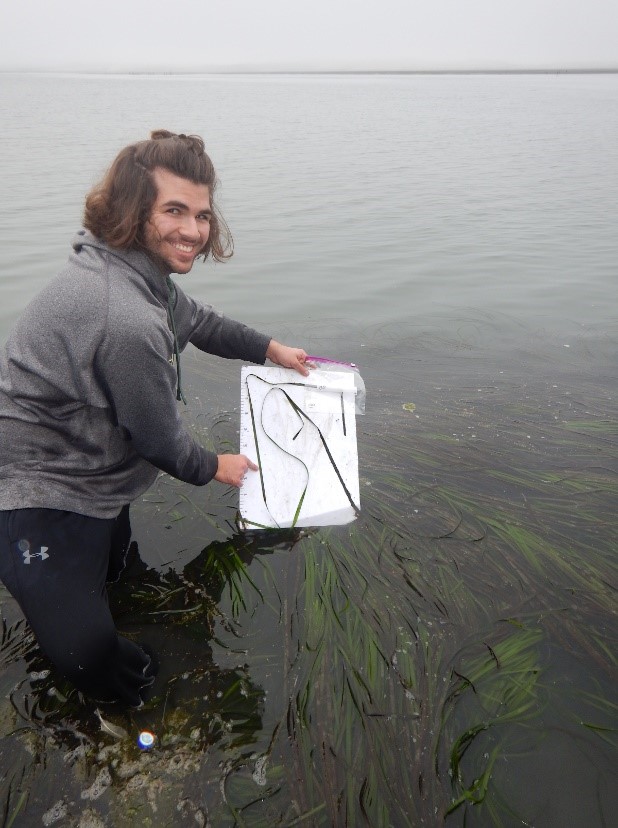 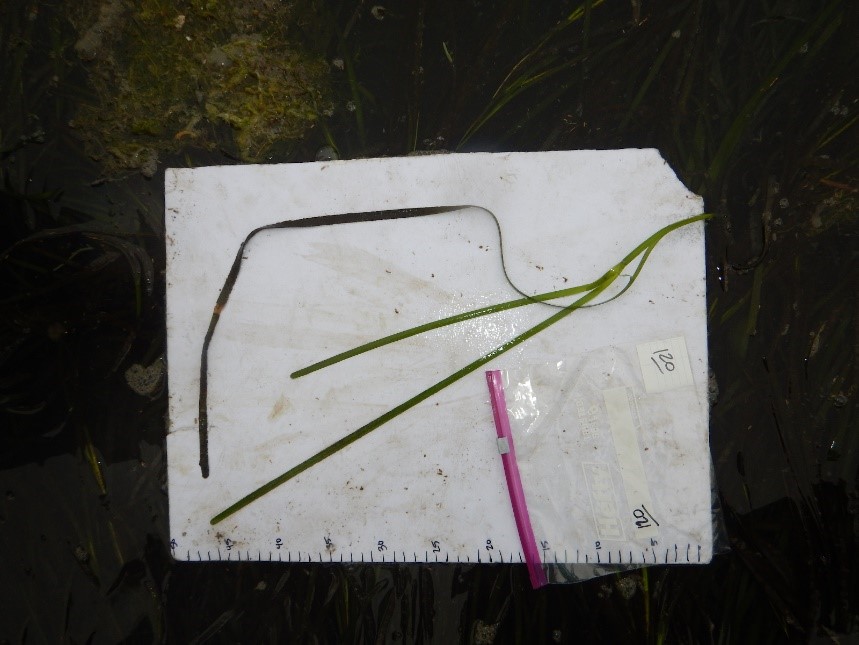 While out in the field, we took photos of the blades against a whiteboard with a measuring tool, before we carefully clipped the blade and stored it in a Ziplock baggie with some of the bay water. Don’t worry, these baggies were sanitized before use and repurposed after collection, so we helped to reduce the waste. We took as many steps as we could to be environmentally cautious and responsible without compromising the integrity of the experiment. We sampled from three different locations in total to get a better representation of the eelgrass population: Coleman Bark, Windy Cove near the Morro Bay Natural History Museum, and the back bay.

At the end of this particular sampling day, we had ten “healthy” specimens and ten “unhealthy” specimens from each location. We deemed the ones that were healthy by looking at whether or not they were fully green. If they had black spots, which is typically dead tissue, they were considered “unhealthy.” We made sure to look at the tip of the blades as well, to check if the blade had been broken or nibbled on by an estuarine critter. We targeted external or older blades since they had been around longer and had increased risk of exposure and potential infection with the slime mold. Professor McConnico explained to us the importance of clearly defining the sampling design to obtain reliable results.

When out in the estuarine environment, whether that was by foot or kayak, we did our best to travel carefully around the grass beds and the animals we encountered. Amongst the eelgrass, we found snail eggs, crabs, lots of zooplankton, and different kinds of algae. When kayaking, we made sure to keep a distance from the otters and sea lions so as not to disturb their rest. 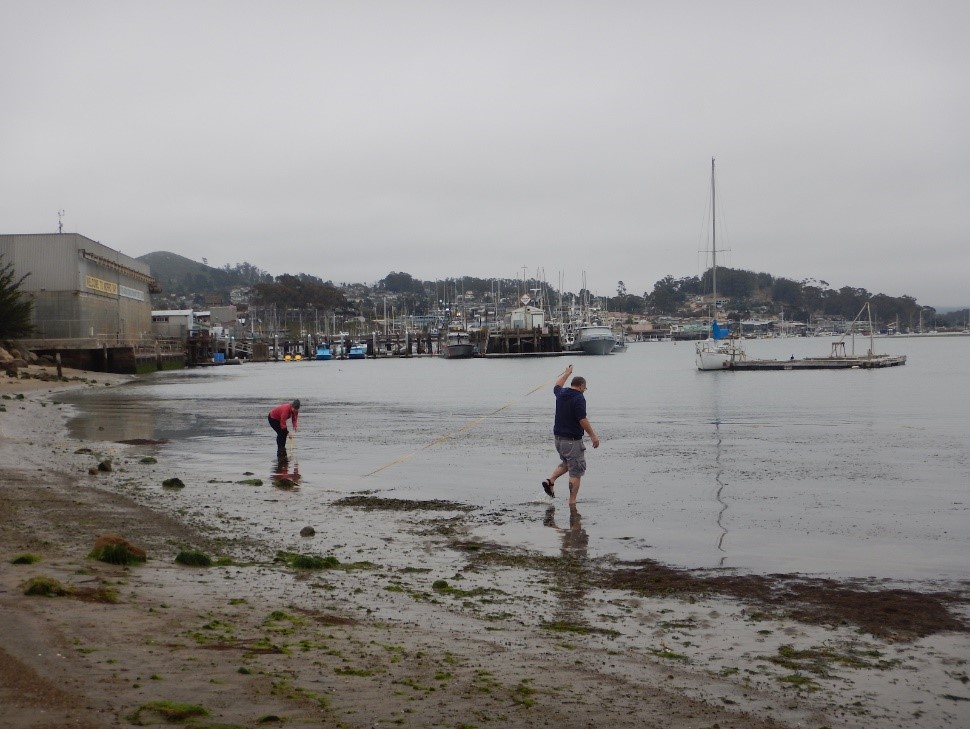 Here you can see Laurie McConnico, algae queen, wearing a redish hoodie, helping Silvio Favoreto, microbiology superman, to measure the eelgrass bed we sampled. Throughout our sampling, we made sure to collect only along the transect tape, and we took notes about all the potential variables at play in the estuary. These variables included the tidal height, time of day, weather, temperature, and most definitely the exact location that the location was taken within the estuarine environment.

Analyzing our samples in the lab

After every expedition into the estuary, we went back to the lab and analyzed the eelgrass by sectioning it and placing it on Petri dishes with agar to help any slime mold that was present to grow.

We gave the dishes a few days, and then examined them using microscopes. We found several different organisms growing on our plates, including various fungi and, you guessed it, the slime mold Labyrinthula!

We could spot the difference between other organisms and our targeted one because Labyrinthula looks kind of like snot when growing on the agar, while the others were fuzzy. The agar we used also had antibiotics in it to suppress the growth of bacteria, as we were only interested in searching for the presence of Labyrinthula. If we hadn’t done this, there would have been a massive overgrowth of bacteria, and we would not have been able to isolate the Labyrinthula.

We were surprised to see that we found the slime mold growing on samples from throughout the bay on both “healthy” and “unhealthy” blades from our collections. It was fascinating to learn that even the green leaves that looked healthy still had slime molds growing on them.  This showed us that you cannot tell if the slime mold is present just by visual inspection of the plants.

Other lab work is pending to determine precisely how much Labyrinthula is present on all of the blades we collected (stay tuned for more results!). While we still cannot say for sure what is causing the decline of eelgrass in Morro Bay, Labyrinthula may be a contributing factor, or it may merely be living opportunistically and does not cause the tissue death we observed.

Next steps in the study

Though we did not solve the mystery behind Morro Bay’s declining eelgrass population during this intense and speedy one-week class, we did gather lots of preliminary information for future students, and our professors to continue researching the declining eelgrass population in Morro Bay Estuary. This fall, a few students from the summer course will continue working on the project as research interns at Cuesta. They will complete laboratory work and get a better picture of Labyrinthula’s distribution and potential impact. We are all looking forward to the next stages of the project!

My perspective: an English major’s takeaway from a scientific course

I didn’t know what to expect when I signed up, but I knew I would learn a lot, and the course did not disappoint. All in all, this class was rich in curiosity, academics, fulfilling work, and much surprising entertainment—especially when watching everyone practice their balance when trying not to fall over into the water. The deep estuarine mud seemed to be a fan of sucking our feet down; it just didn’t want to let us go! The hands-on research experience provided was enjoyable as much as it was hard work. We got to study our local estuary by actually being at the site, outdoors. We learned how to tackle a real research project; I loved that I got to learn both lab and field techniques (from the best of the best). Laurie and Silvio’s enthusiasm for their work was inspiring, and we, the students, were grateful for their time and providing this unique opportunity.

As a final take away, learning how humans have negatively impacted the planet and the health of estuaries was the most stressful for me. Well, that and the pipetting—I didn’t even really know grip dexterity was a thing until I took this course. So, maybe a group of fourteen Cuesta College students can’t solve the entirety of the eelgrass population decline within one week. But, we got things started and can contribute to solving the problem in the future by continuing to volunteer, seizing other research opportunities at Cuesta, and sharing what we learned with others. I firmly believe that once a student is educated, that knowledge will spread to friends and loved ones, and that can make a real difference. It has for me!

Dauphiene Parks is a 2nd year student at Cuesta College.  While technically an English major, she has fallen in love with Marine Science and has a passion for studying and protecting the environment.  She enjoys reading, writing, painting and other forms of creativity as well as spending time exploring the local coast.  She plans to transfer to UCSB soon, and her ideal career would be one that combines her love for writing with protecting the environment.  Look for more of Dauphiene’s work in the field of environmental education coming your way soon!