Starting in October, monarch butterflies fill the branches of eucalyptus, Monterey pines, and other trees along California’s Central Coast. They cluster together high above the ground, looking much like bunches of dead leaves unless you use a spotting scope to take a closer look, or catch a flash of their black and orange wings as a butterfly moves away from its cluster to a sunny spot where it will open its wings and take in the sun’s warmth.

Monarch butterflies come here to ride out the winter in our moderate climate, traveling a migration path that is more than 1,000 miles long to escape the cold temperatures of the Rockies and other areas to the north. 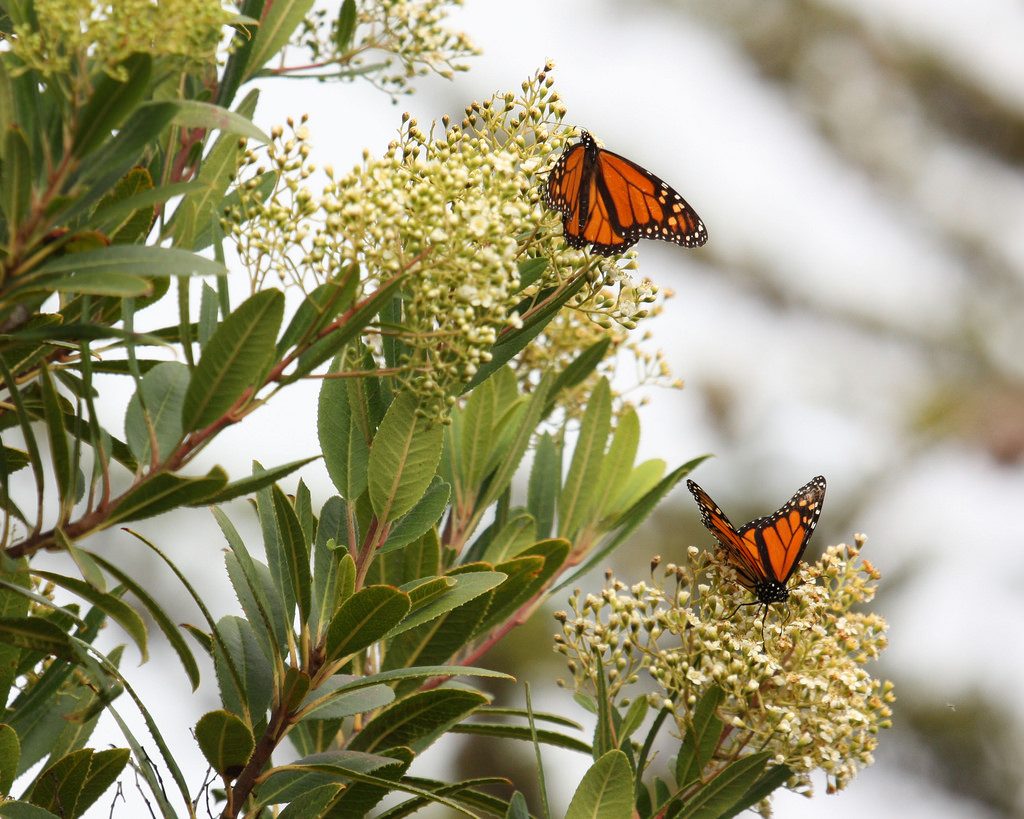 A migration across generations

One monarch butterfly alone cannot make the journey from north to south and back again. The monarch butterflies that settle in on the California Central Coast and Mexico this time of year began their journey from the northernmost reaches of the monarch’s range around mid-August. They stay here until February or March, feeding on nectar, sunning themselves to keep warm, and resting in their clusters. When temperatures begin to rise in February and March, they mate, lay their eggs on any milkweed plants they can find, and then die. 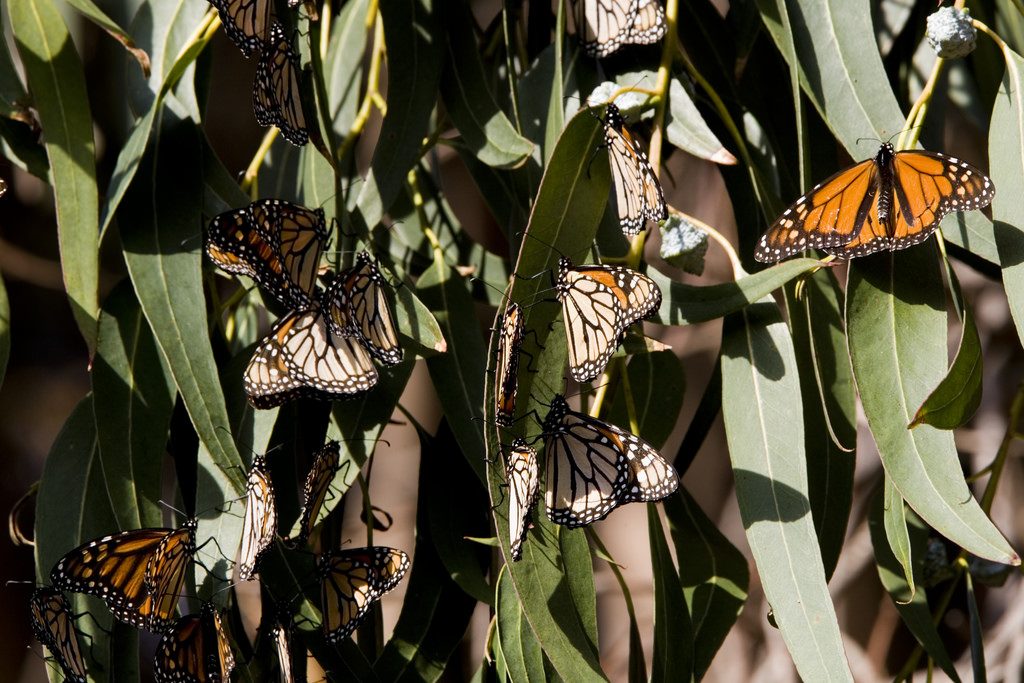 When the next generation of monarchs emerges, they begin the migration northward. This group of monarchs is referred to as the first generation. They will feed and move generally north for two to six weeks before they, too, mate, lay eggs, and die. This first generation is followed by two or three more generations that complete successive legs of the journey to the north.

Typically, the third or fourth generation will reach the northernmost stretch of their range around June. The eggs they lay will produce the late-summer generation of monarchs, which will begin the journey southward in mid-August. While it takes multiple generations for the monarchs to move north, this final generation of monarchs flies the entire migration path from north to south before overwintering and starting the cycle over again. To accomplish this, the final generation lives between six and nine months—at least four times longer than each of the previous generations.

The monarch population is dwindling

The drastic decline of the Western monarch population between the 1980s and today has been in the news for the past few years. It is estimated that as many as 4.5 million butterflies overwintered on the coast of California and Baja, Mexico during the 1980s. According to the Xerces society—an international science-based nonprofit that works to conserve invertebrates, including butterflies—the number of monarchs surveyed along the same stretch had dropped by 97% as of the mid-2010s. Scientists have cited several reasons for the dramatic loss.

One reason for this reduction in numbers revolves around the loss of essential native milkweed plants along the monarchs’ migration path. These plants provide a place for the monarchs to lay their eggs and allow their larvae to feed on of them. Milkweed plants are also a food source for monarch caterpillars.

By consuming the milky juice of the plant, caterpillars become toxic for birds and other predators, discouraging their consumption. Native milkweed plants are often cut down for agriculture or other development. Fewer milkweed plants means less food for caterpillars, reduced protection from predators, and fewer places for adults to lay eggs. The number of monarchs decreases in response to these challenges.

The use of insecticides both in agriculture and for landscaping purposes is a major threat to monarchs. Butterflies that travel over farm fields are especially at risk, but chemical pesticides can also drift in the wind leading to contamination outside of agricultural areas that may also affect monarchs and other butterflies. In addition, herbicides used to kill weeds can also kill native plants, including the milkweed butterflies must lay their eggs on.

Lack of nectar-producing plants to fuel their journey

Another problem that adult monarchs face is a shortage of nectar-producing plants that the first through fourth generations must feed on as they migrate north. Whereas butterflies used to have wide open lands to travel across and plenty of flowering plants to feed on, increased housing and industrial development as well as large-scale farming operations have replaced wild lands, contributing to this shortage. Herbicides also contribute by killing flowering plants along the migration path. Without enough food, monarchs cannot successfully migrate or produce the next generation to continue the journey.

Despite efforts by organizations and agencies like the Xerces Society, the U.S. Fish and Wildlife Service, and California State Parks to help monarchs by conserving habitat along their migration path, encouraging people to plant native milkweed and nectar-producing plants, and working to curb the use of harmful insecticides and herbicides, the number of monarchs found at overwintering sites along the Pacific coast dropped drastically during the winter of 2018–2019.

Data reported during the Western Monarch Thanksgiving Count showed an 86% drop in the overwintering population along California’s Pacific coast between 2017 and 2018. Records show that 192,668 were counted during the 2017 effort while less than 30,000 were counted in 2018. These numbers are concerning on their own, but they become even more worrisome in the light of scientists’ estimate that 30,000 monarchs may be the extinction threshold for the species.

Data gathered by citizen scientists during the annual Thanksgiving count is what brought these numbers to the scientific community’s attention. This data is essential in helping to paint a full picture of the threats that monarch butterflies face. It also helps us understand what we still might be able to do to help conserve this iconic species of transnational pollinators.

Now through December 8, 2019, you can participate in the Thanksgiving count. If you were already planning to spend some some quality time outdoors with friends and family over the holiday week, why not dedicate one of your outings to this important citizen science opportunity?

Watch this training video to learn all you need to know to participate in this year’s count.