We are grateful for the many people—volunteers, supporters, partners, lovers of the bay and the wild lands that surround it—who make the health of the Morro Bay estuary a priority. We are grateful for the slopes of the Morros that send freshwater running down the creeks, carrying detritus to feed the bugs, bringing bugs to the fish, and tempering the salty bite of the incoming tide when the waters mix inside the bay.

If the video above doesn’t load, click here to watch a timelapse of a twelve-hour tide cycle in Morro Bay.

We are grateful for the push and the pull of tides, the hide-and-seek of predator and prey, the cyclical chase of life and decay, that keeps the estuary in balance. We are thankful to be here and now, working together to help safeguard the abundance of life that depends on a clean and healthy Morro Bay estuary and watershed.

Today, we are sharing a few videos that center on the ideas of balance and abundance in the Morro Bay estuary and related areas beyond its bounds.

Southern sea otters, once thought to be extinct, thrive in Morro Bay. They spend much of their time resting to conserve energy and hunting for the shellfish, octopuses, crabs, urchins, and other invertebrates that live at the bottom of the bay. Over the past decade, the population of sea otters within the estuary has more than doubled. Wildlife watchers would once thrill to see a dozen otters in the bay. Now, it’s common to see between thirty and fifty otters inside the bay on any given day. 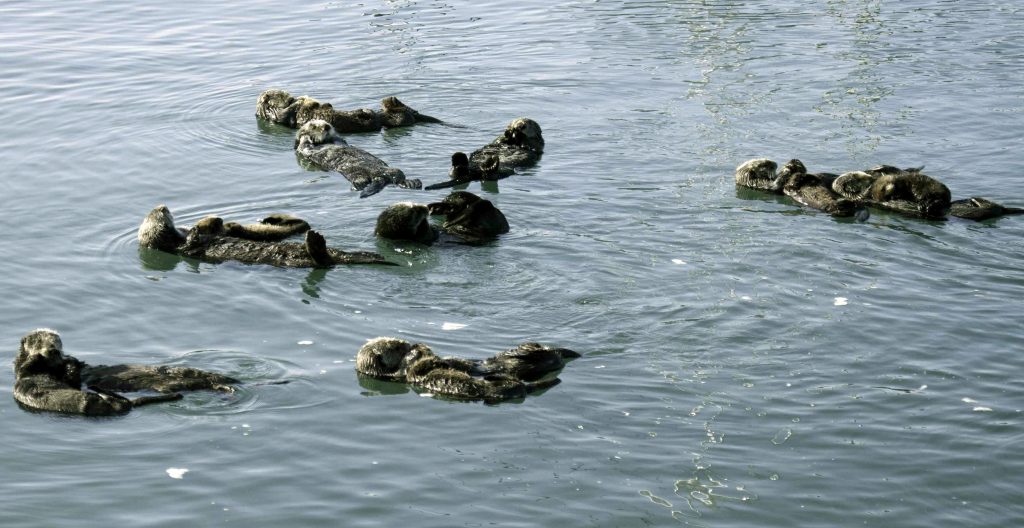 Video: A raft of otters rests near the south T-pier

The following video from Sea Otter Savvy shows female sea otters and their pups resting near the south T-pier along the Embarcadero.

See Sea Otter Savvy’s viewing guidelines to learn how you can enjoy watching sea otters without disturbing them.

The death of a whale leads to a deep-sea feast

When a whale dies out at sea, its body drifts and sinks until it rests on the ocean floor. There, nature takes over, turning the whale’s death into a source of life for thousands of bottom-dwelling organisms.

The body of the deceased whale, also known as a whale fall, is a windfall, if you will—an unexpected boon that provides a rich source of nutrients for months or even years. Scavengers, including deep-sea octopuses, eels, and crabs, eat the soft tissue from the carcass. Osedax worms, commonly called boneworms or zombie worms, digest the fats and oils within the whale’s bones. The little pieces of organic matter that break off during this decomposition process settle on the ground around the carcass, enriching the sediment and sustaining microbes and other organisms.

Though whale falls do not happen in the Morro Bay estuary, similar processes occur in the bay and the creeks that drain into it. In the freshwater streams that lead to the bay, fish and other fauna die, providing food for scavengers. Detritus from these carcasses settles to the creek bottom, enriching the sediment and providing sustenance for microbes, aquatic bugs, and other organisms. The same cycle takes place in the bay itself when a sea slug dies and sinks to the bottom of an eelgrass bed, or when a bird carcass decomposes in the tidal salt marsh.

The following video shows scavengers and boneworms feeding on a whale fall. The crew of the Nautilus Exploration Vessel captured this footage with a deep-sea ROV at the Davidson Seamount more than two miles below the surface.

You can tune in to more Nautilus footage here.

Large animals like humpback whales and sea lions require significant amounts of food to sustain them. Humpbacks are filter feeders that survive on krill and anchovies, swallowing them by the thousands. California sea lions feed primarily on fishes, squid, and octopuses. According to National Geographic, these pinnipeds have been known to hunt for thirty hours without stopping to rest. That kind of marathon hunting session requires sea lions to expend enormous amount of energy. To avoid burning valuable calories, sea lions much prefer an easy meal when it’s available.

Sometimes, large schools of small fish—often called bait balls when the fish cluster together to avoid predators—happen by and offer all the fish they could want within diving distance. Besides sea lions and humpback whales, these veritable fish buffets often attract seabirds, too. When everyone shows up to the bait-ball party at once, a feeding frenzy ensues.

We see small-scale feeding frenzies happen within the Morro Bay estuary from time to time. The silver flash of sardines or anchovies schooling close to the surface cues the pelicans and gulls to fly in. Then, the sea lions dive from their dock to join the hunt. Watch a video of a feeding frenzy just off the Morro Bay Embarcadero here.

Though these events within the bay are impressive, the much larger bait balls that occur in the open ocean result in enormous feeding frenzies that are in a different league altogether.

We wish you and yours balance and abundance during this season and beyond.