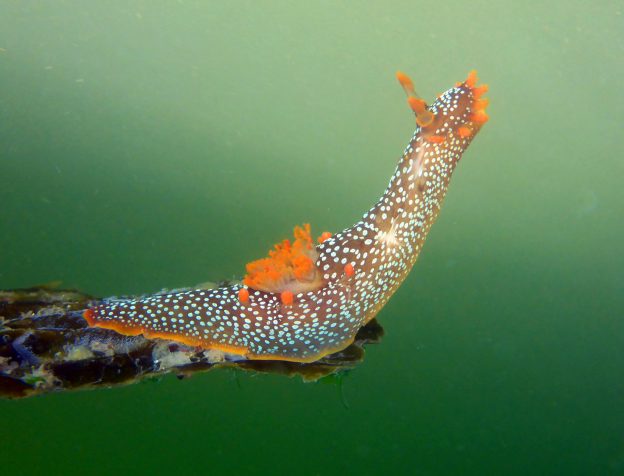 One of the most charming creatures found along the Central California coast is the Spotted Triopha nudibranch (Triopha maculata). With its colorful body, white polka dots, and bushy “beard”—properly called papillae—on the edge of its oral veil, this engaging sea slug is one of the most common you’ll encounter year-round, either on a dive or during a casual inspection of tidepools at low tide. 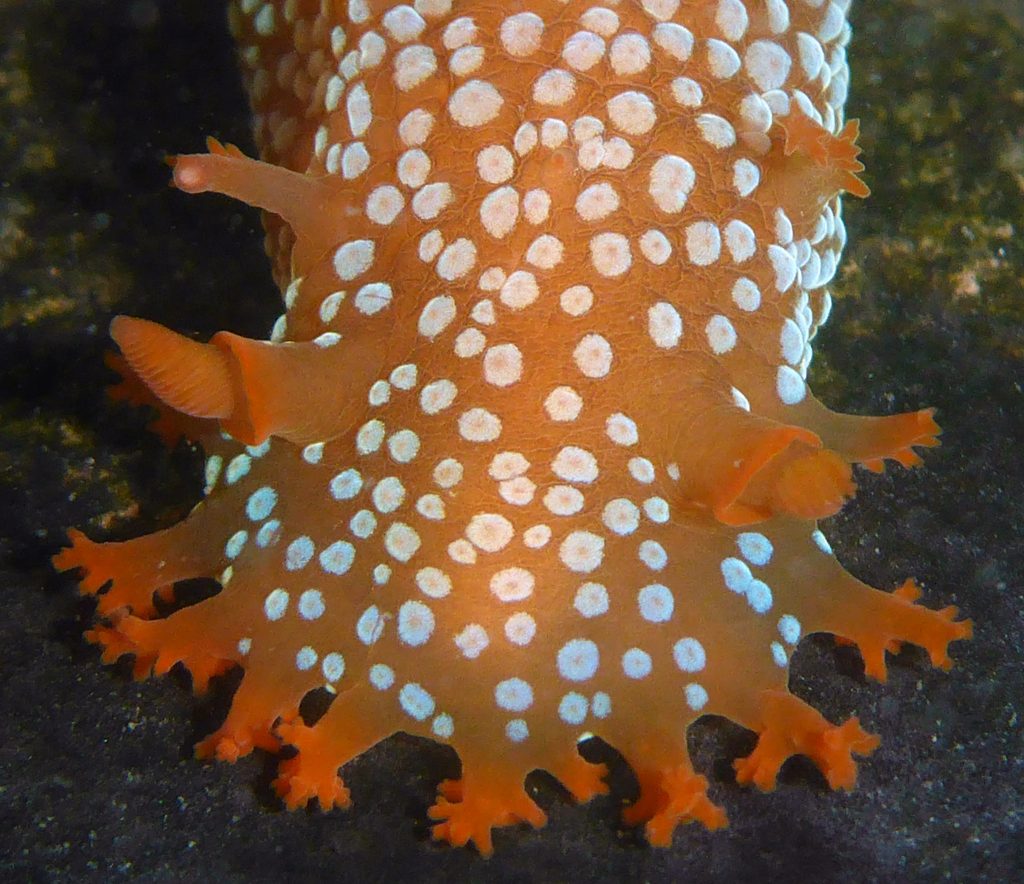 The only minor difficulty is realizing that you’re looking at one. Spotted Triophas come in at least two color variants that caused even veteran scientists to think they were different species until 1977, when malacologist Antonio Jose Ferreira published a paper sorting this out.¹

“The original name for the yellow color variant of this species was Triopha grandis MacFarland, 1905,” wrote nudibranch researcher Dave Beherens in 2003. “Triopha maculata was intended for the dark specimens, as shown in color plate 19 in MacFarland’s memoirs, published posthumously in 1966. Tony Ferreira’s review in 1977 cleaned up the taxonomy for this genus. Surprisingly in this day of taxonomic revision maelstrom, nobody has touched it since.” Sixteen years later, the maelstrom continues, but the paper remains valid. They are indeed one species with quite a bit of color variation.

Nudibranch researchers have since reported the two color variants interbreeding in laboratory settings, although they may not encounter each other as often in the wild. 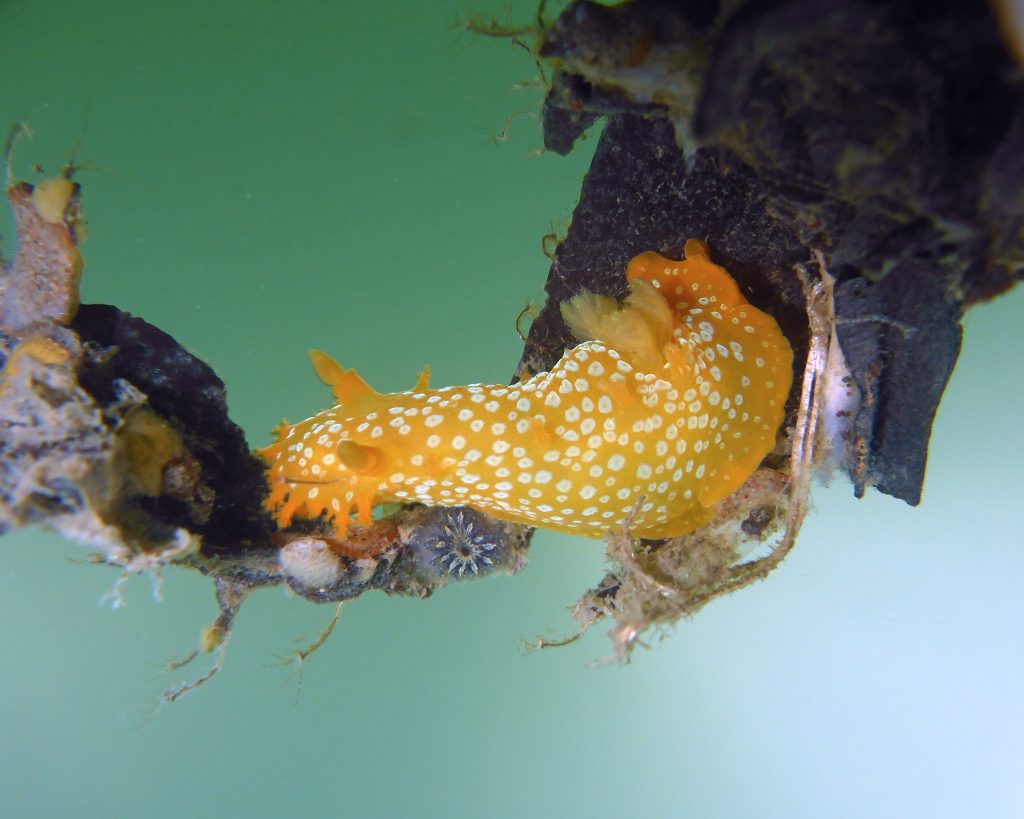 This individual is an example of the light variant of Triopha maculata, photographed in Santa Cruz, California by Robin Agarwal. Sourced from Flickr and shared via Creative Commons License.

The pale yellow variant of T. maculata is often found on kelp (Macrocystis sp.), including detached, drifting kelp mats in harbors and estuaries. Like all nudibranchs, they are carnivores, and the pale T. maculata can often be seen feeding on bryozoans (including those in the genuses Membranipora, Bugula, and Crisia) attached to the kelp. If conditions are right and there is plenty of prey, they have been reported to grow up to eighteen centimeters long, although five centimeters seems to be a more normal maximum. They are a light orange color with slightly darker rhinophores and oral processes, and their spots are large and bluish-white. Juveniles look like miniature versions of the hulking adults. 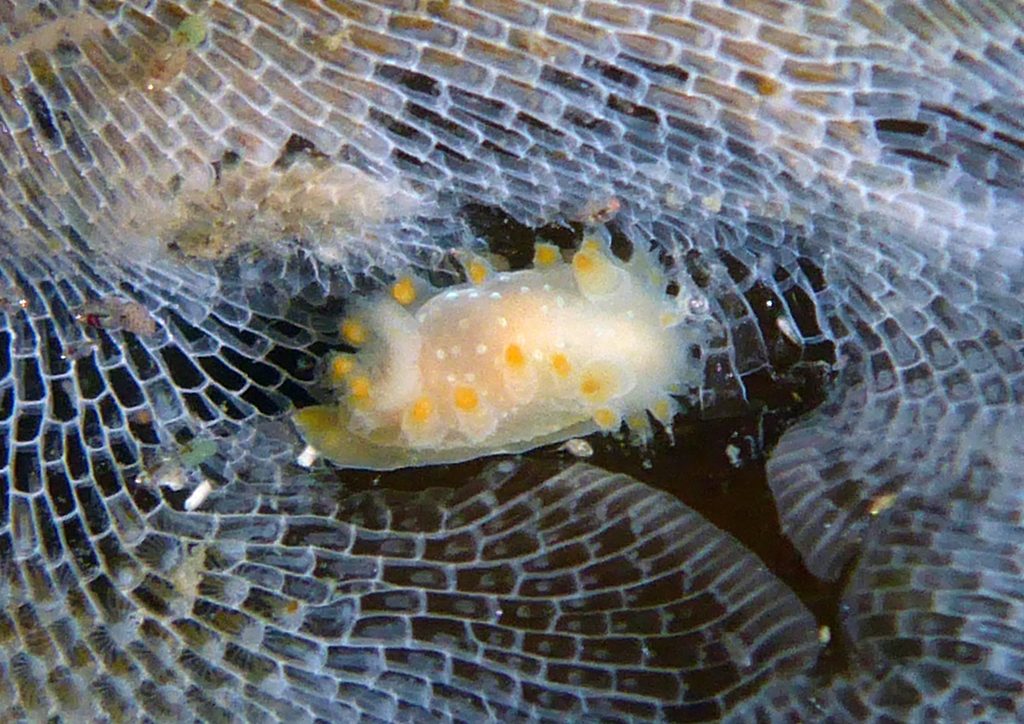 The dark variant of T. maculata, on the other hand, seems to be most often found in the rocky intertidal, where it feeds on other species of bryozoans. 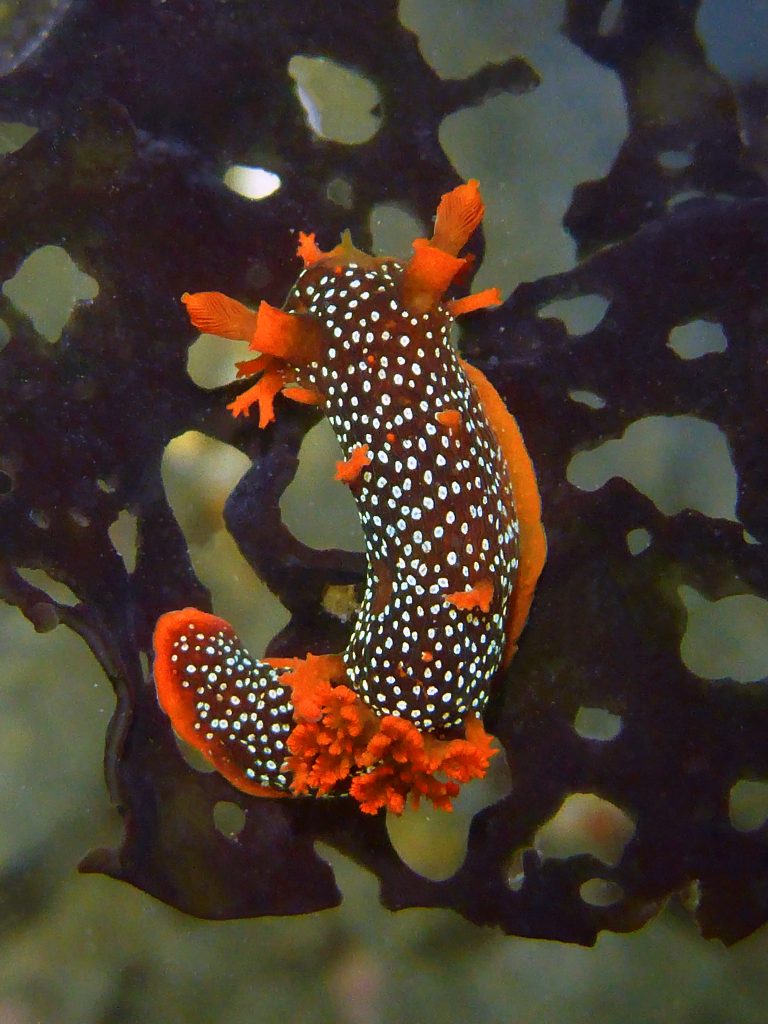 The juveniles are about one centimeter long and bright red-orange, with a scattering of barely visible white spots. As adults, they do not grow as large as the yellow variant, topping out at two centimeters, but are perhaps even more visually striking with their rufous brown bodies, bright orange gills, rhinophores and “beard,” and high-contrast white spots. 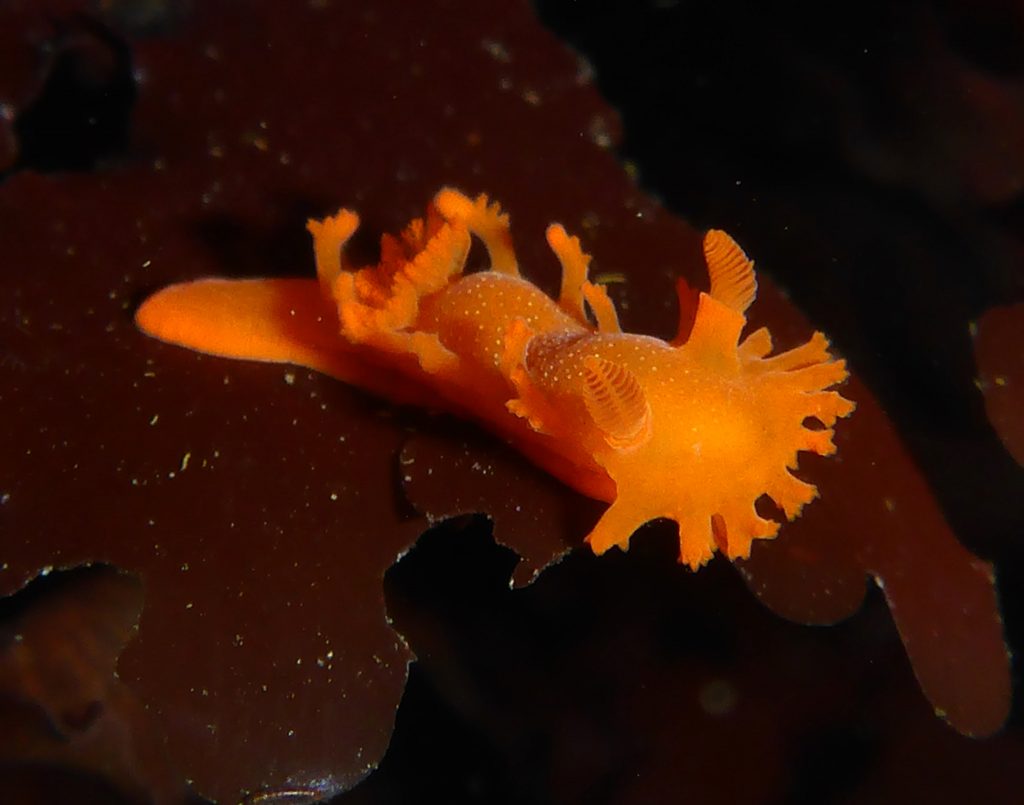 A third color variant of T. maculata remains a solid ochre yellow color throughout its life, with a scattering of faint white spots. This variant is most likely seen in Southern California, particularly in tidepools south of Los Angeles, though a few individuals are occasionally found further north. 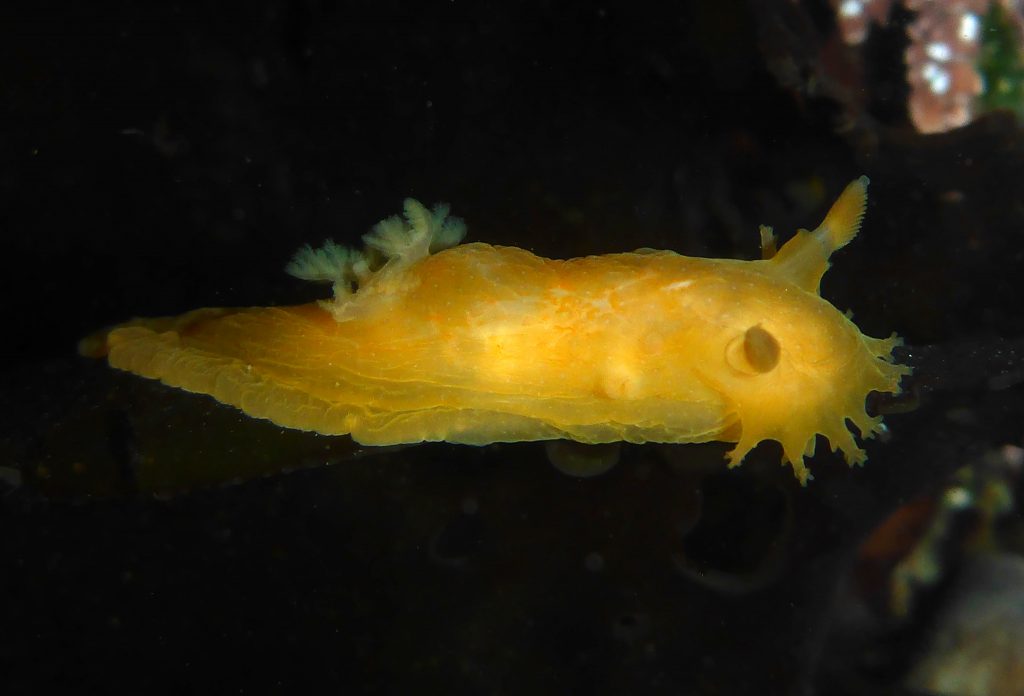 Far more easy to identify is T. maculata’s cousin, Triopha catalinae. Despite their scientific name (they were named for Catalina Island when they were first described in 1863), this flamboyant sea slug species is commonly known as a Sea Clown. Not small by nudibranch standards, they grow to as much as seventy millimeters if conditions permit. T. catalinae have an all-white body with crown-shaped red-orange papillae on its back, with a red-orange “beard.” The tips of their branchial plumes (gills) and rhinophores are red-orange as well. Like many nudibranchs, it is thought that their aposematic coloration warns would-be predators that at minimum, they taste bad and are potentially toxic as well.

Although less common than T. maculata, these entertaining little creatures are nonetheless reasonably easy to spot in rocky California tidepools and subtidal settings. Like their cousins, Sea Clowns move slowly along a variety of substrates, grazing on bryozoans. Smaller individuals can even crawl along on the underside of the surface of the water in a tidepool, though there seems to be a size limit before they grow too heavy to continue this behavior. Triopha egg ribbons are also similar to those of many large dorid nudibranchs: wide, floppy rosettes of white or cream, attached by one edge to a rock, kelp, or other algae. Finding these distinctive egg masses is a good way to discover adult Triophas hiding nearby. 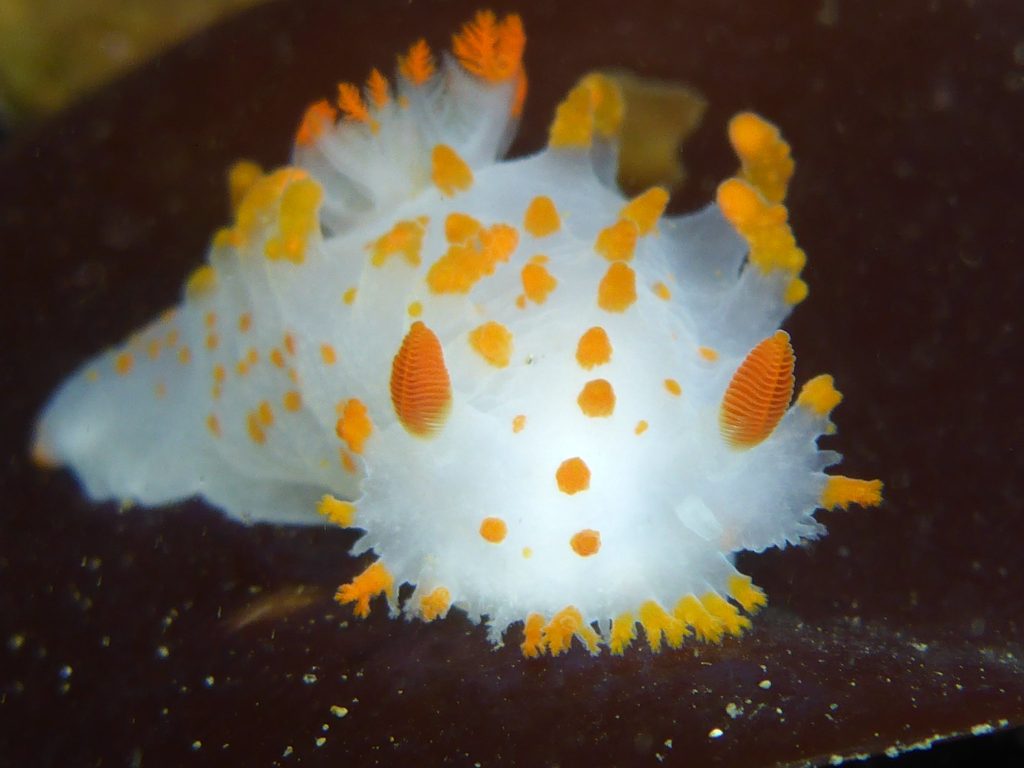 For best photography results and best tidepooling etiquette, all nudibranchs, including Triophas, should not be handled. They’re slow movers and  picky eaters, and therefore should be left in the same tidepool where their bryozoan prey already meets their exacting standards. As always, I’d encourage you to assist marine researchers by posting your photos of California nudibranchs and other life to iNaturalist.org (a free, citizen science platform that IDs your photo observations for you, among other things). To make it even easier, here’s a field guide to California nudibranchs I built for iNaturalist. Enjoy your explorations!

Thank you for helping our beautiful, bountiful, biodiverse bay