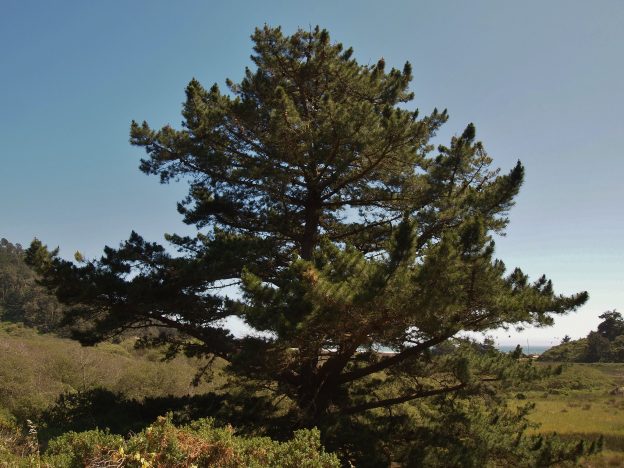 Overview of the trees of San Luis Obispo County

In many ways, San Luis Obispo County is a throwback to “Old California,” with its beautiful landscapes of oak woodlands, chaparral, and grassland. If asked to describe the county’s flora, many of us might not think to mention… conifer forests?

Though our county’s coast ranges are home to a variety of native coniferous trees, for the most part, they’re overshadowed by our more prolific native species. Our iconic oaks—coast live oak, valley oak, blue oak—virtually define the Central Coast. Our waterways are full of California sycamore, Fremont cottonwood, and arroyo willow; California bay laurel and Pacific madrone grace our hillsides and drainages. (Species descriptions can be found in the USDA Forest Service’s “Silvics of North America” manuals by Burns and Honkala. Though these guides were published in 1990, they are still an excellent reference.)

In contrast, the native conifer species here in San Luis Obispo County are mostly unobtrusive. They don’t have any particular economic value locally, and they never approach the great height or age of famous timber species such as ponderosa pine, sugar pine, or Douglas-fir. Our native conifers tend to be widely distributed and often exist in remote patches according to their specific environmental needs. (Find more information on this in the Forest Service’s publication, Pacific Southwest Forest and Range Experiment Station, by Griffin and Critchfield, 1972). Nonetheless, these species have outstanding scenic and ecological value. They support local wildlife and plant communities, and supported human communities for thousands of years as well.

Most of our county’s conifer species are highly fire-adapted. Several are classified as “serotinous” or “closed-cone” (see descriptions of species listed below on the USDA Forest Service Fire Effects Information System website, 2019). This means that their cones only open and scatter seed after the tree is exposed to high heat, such as from a wildfire or extended heat wave, or other types of damage. Thus, mature cones may remain closed and attached to the tree for years or even decades. Serotinous species can sometimes be identified by cones growing directly out of the trunk in clusters.

Under typical ecological conditions, when a stand or grove of serotinous trees is between 80 and 120 years old, its trees will be killed en masse by a mortality event – often, a wildfire. Within a few days, the singed cones will open, releasing vast amounts of seed that will germinate in the nitrogen-rich wildfire ash and form the basis for an entire new forest. The term used by scientists for this type of life cycle is a “stand-replacing fire regime.” Due to this unique method of reproduction, it is common for stands of serotinous conifers to contain trees that are all roughly the same age. 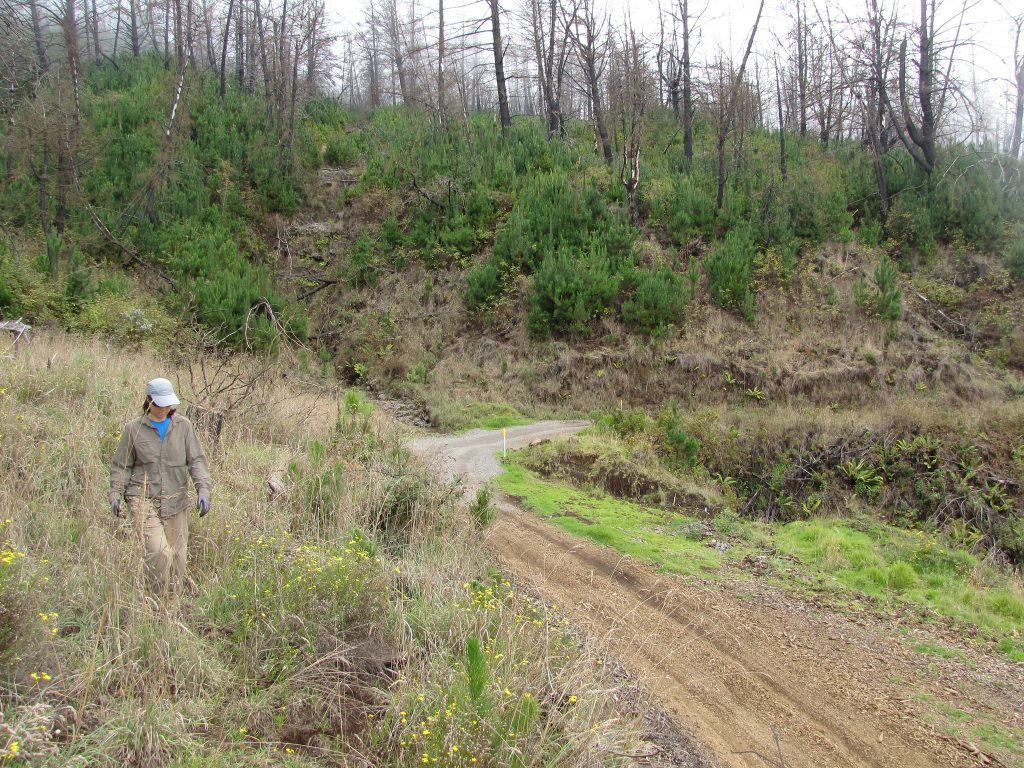 The most well-known of our native conifers, the Monterey pine was once one of the world’s rarest pines, occurring only in five native stands including one in Cambria. However, in the twentieth  century, this species became one of the most commonly planted landscape trees in California. Even more notably, due to its fast, straight growth form the Monterey pine is one of the most widely planted timber trees in the world; in vast plantations across the globe, it is known as “radiata pine.”

Since the mid-1980s, a fungal disease called pitch canker (Fusarium circinatum) has killed many thousands of Monterey pines in California and threatened the industry worldwide. Pitch canker is believed to be native to Mexico and was first seen in southeastern US pines in the mid-1940s prior to its arrival in California by unknown means. 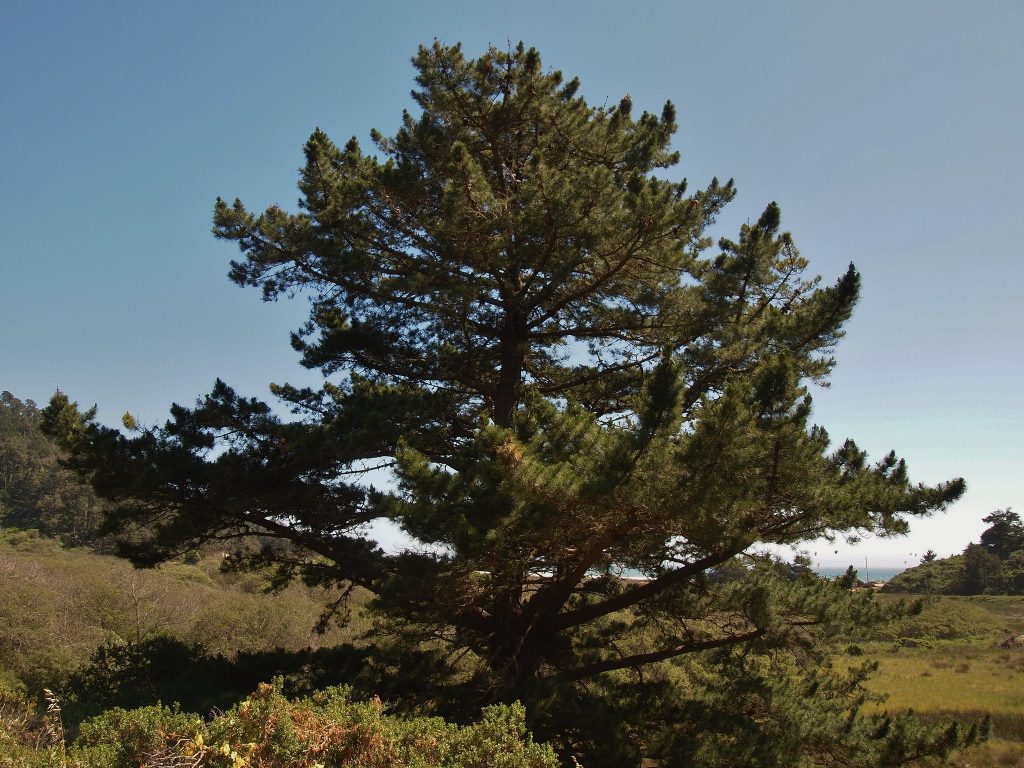 This species grows throughout coastal California, including the Channel Islands, and Baja California, but is uncommon in any given location. In San Luis Obispo County, a large mountainside stand can be seen on private land above Montaña de Oro’s Coon Creek trailhead. They can also be found on the hillside above Sycamore Mineral Springs resort near Avila Beach. 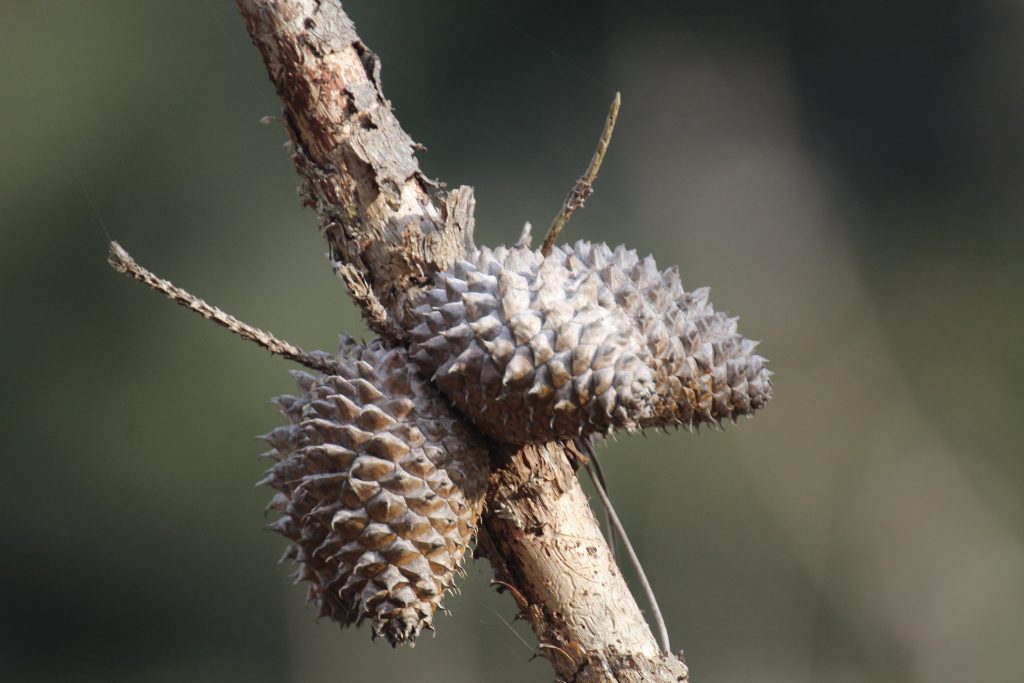 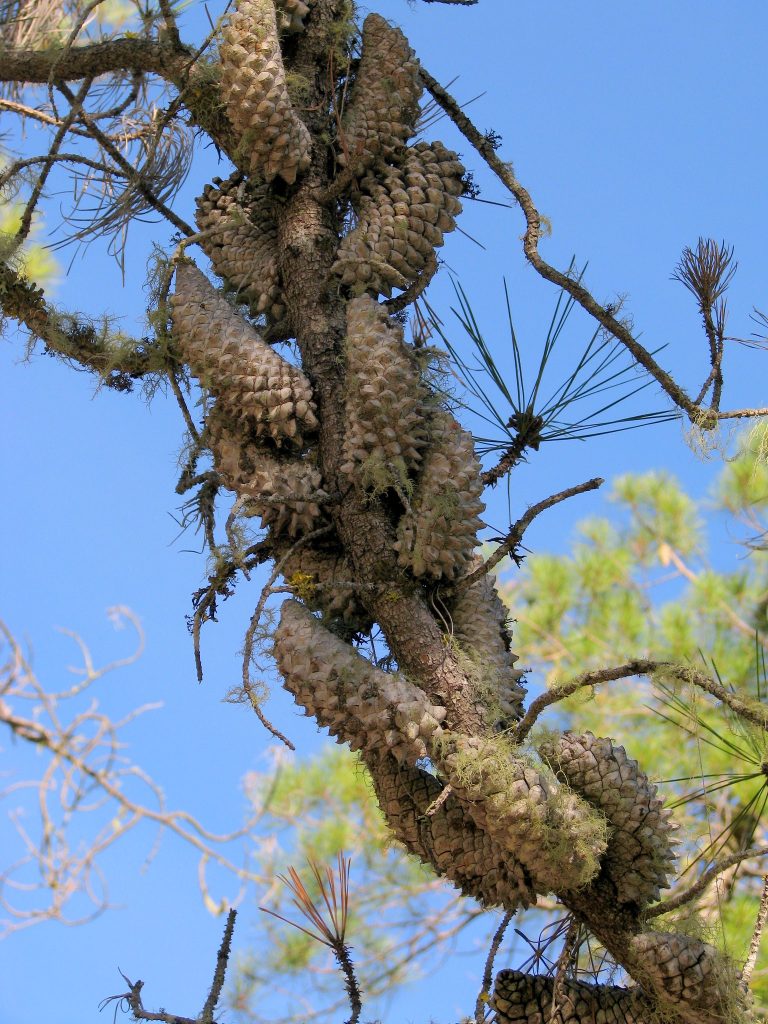 These closely related species each have long needles in bundles of three. Coulter pine needles are dark green, while gray pine needles are light greenish-gray. Both have large, heavy, wickedly spiny cones – in fact, Coulter pine has the heaviest cone of any pine species. The seeds from were an important food source for for many thousands of years. Gray pine occurs across the mountainous parts of northern and central San Luis Obispo County and elsewhere around California; Coulter pine has a somewhat less widespread distribution. 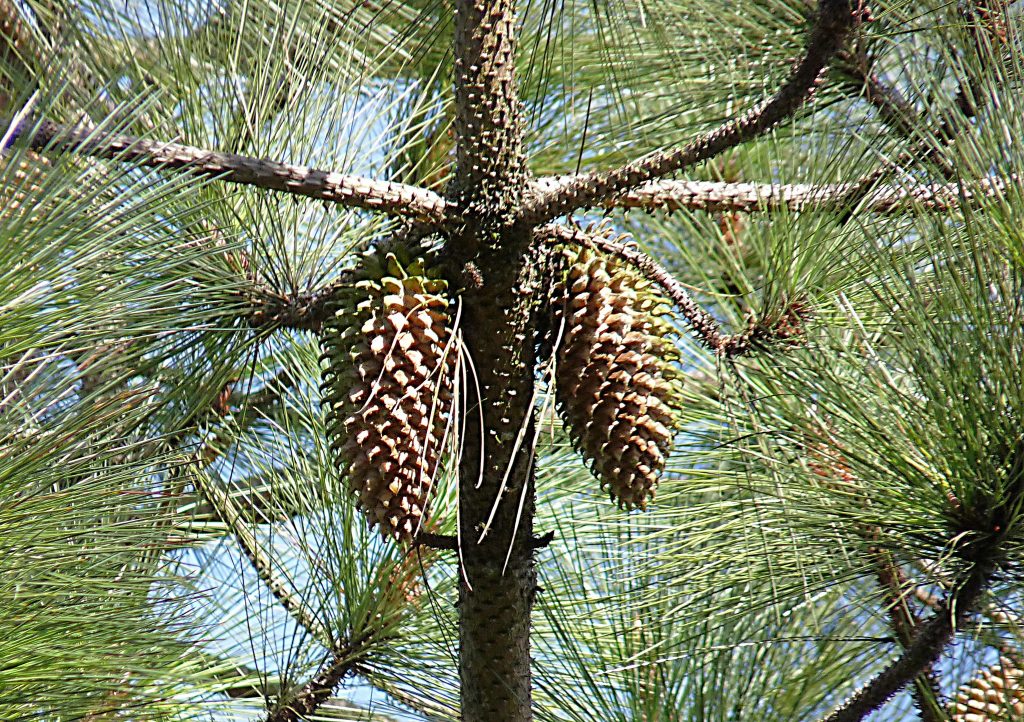 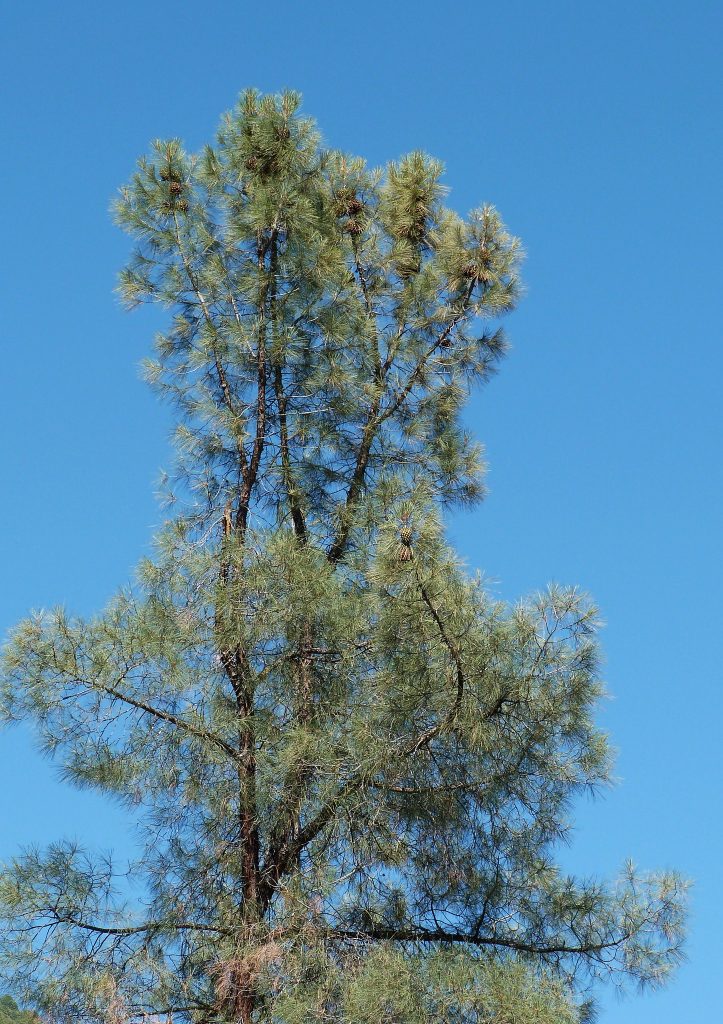 This widely distributed but locally rare native cypress grows in thick stands in the Cuesta Ridge Botanical Area on the Los Padres National Forest. These stands were decimated by the 1994 Highway 41 Fire, but as another serotinous species, the cypresses quickly grew back at a rate of many thousands of seedlings per acre. Currently, they are so thick as to be nearly impossible to walk through. The largest mature specimens that are visible from the West Cuesta Ridge Road passing through the grove are currently up to about 30 feet tall.

Sargent’s cypress trees at the entrance to the Botanical Area on West Cuesta Ridge. Photograph by Chris Hamma.

So Close, Yet So Far

If not for random chance in the surveying of the San Luis Obispo-Monterey County line way back when, San Luis Obispo County could legitimately brag about being home to some additional high-profile conifers. Within three miles north of the county line along Highway 1, the ridges and drainages of southern Big Sur contain the southernmost native coast redwoods. And, another 20 miles or so farther north along the coast highway, you’ll enter the territory of the world’s rarest true fir species, Santa Lucia or bristlecone fir.

So there you have it—San Luis Obispo County, nobody’s idea of “forestland,” is nevertheless associated with a respectable diversity of coniferous tree species. Tell your friends! 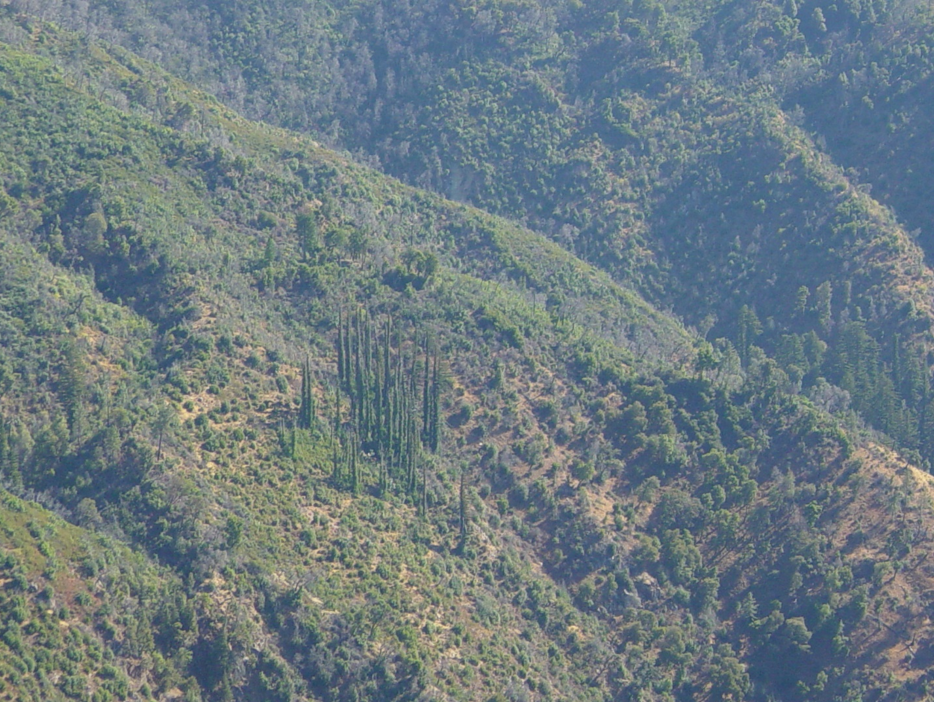 Santa Lucia firs are the tall, skinny trees in the center of this vista from Cone Peak in Big Sur. Photograph by Chris Hamma.

Chris is a longtime outdoorsman who grew up in San Diego County and has lived in SLO County for nearly 20 years. In addition to holding Bachelor’s and Master’s degrees in Forestry and Natural Resources Management from Cal Poly SLO, he has worked for and volunteered with the U.S. Forest Service, National Park Service, SLO County Parks, and UC Berkeley Forestry, as well as spent several years working in the hotels and restaurants in Yosemite National Park.