Updates from the Field, August 2021: Red tides, Wildlife, and Volunteering

Updates from the Field, August 2021: Red tides, Wildlife, and Volunteering 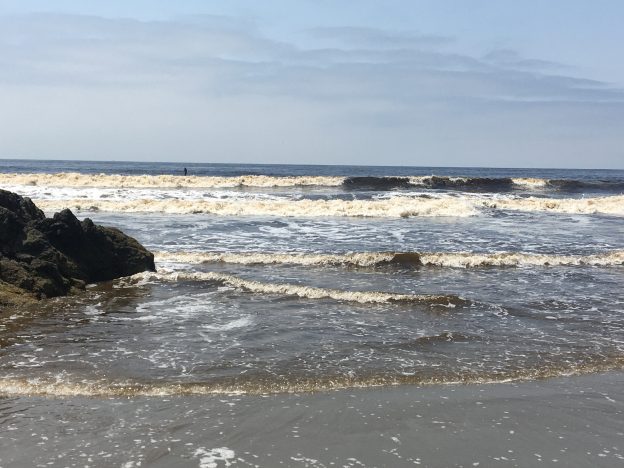 Why does the water look red?

Have you noticed dark, murky water in or around Morro Bay recently?

According to Dr. Ryan K. Walter from Cal Poly, samples retrieved from the Cal Poly pier as well as those collected near the mouth of Morro Bay at Morro Rock have shown abnormally high concentrations of a single-celled phytoplankton dinoflagellate called Akashiwo sanguinea during the month of August.

Blooms of phytoplankton like the ones observed from Cal Poly can accumulate to form what is known as a red tide, resulting in murky, often red-appearing water. Red tides are blooms of phytoplankton, which occur seasonally and are typically non-toxic. Red tides like this are somewhat normal for this time of year as phytoplankton tend to thrive in warmer, calmer waters, often accompanied with elevated levels of nutrients.

Red tides can persist for weeks or even months, depending on conditions. In Morro Bay, the increase in phytoplankton A. sanguinea concentration was first observed around mid-July, lasting until early August. During August, concentrations dropped and then picked back up again toward the end of the month. 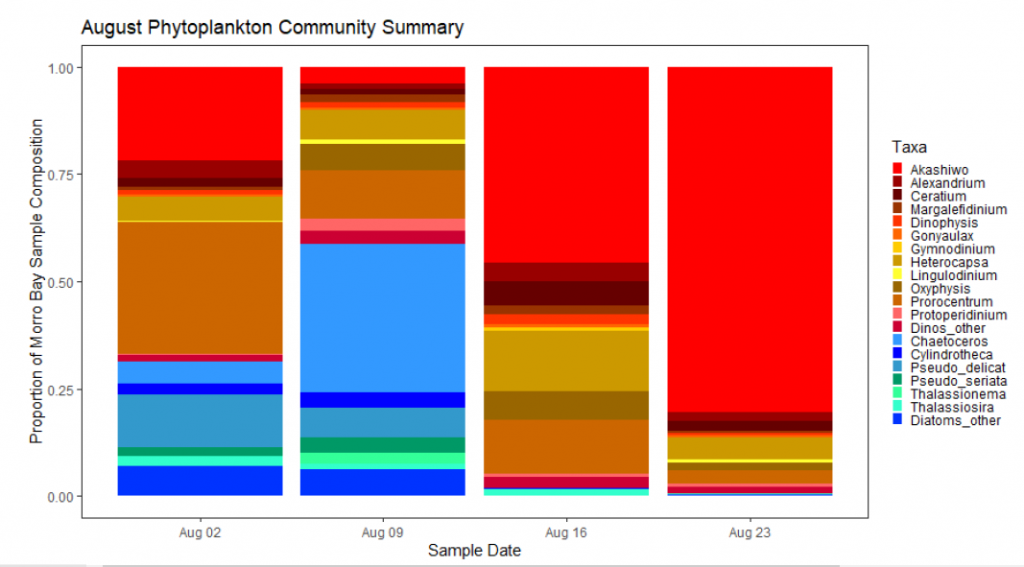 The graph shown above shows proportions of phytoplankton species present in samples from Morro Bay from August 2 to August 23. The red bar indicates the presence of the phytoplankton dinoflagellate called Akashiwo sanguinea, which is believed to be the culprit for the recent red tide.

The graph above, provided by former Cal Poly undergraduate, Nicholas Soares, visualizes the relative concentrations of phytoplankton in Morro Bay during August, showing how concentrations of different taxa have varied throughout the month, as. In the graph, the A. sanguinea taxa is indicated by the bright red color at the top of each bar, while the other shades and colors represent different phytoplankton taxa. The wider bars indicate higher species composition, while the narrow bars indicate a lower composition.

Phytoplankton samples collected by Cal Poly are made possible through funding contributed by the Southern California Coastal Ocean Observing System and the hard work of students like Nicholas Soares and Elysa Romanini.

The phytoplankton thought to be most contributing for the recent red tide in Morro Bay, A. sanguinea is not known to be toxic for humans. Other types of phytoplankton though, like the dinoflagellate Alexandrium produces paralytic shellfish poisoning (PSP) toxins, which are among the most potent natural toxins known to date.

Results from the monitoring program can be visualized on their interactive phytoplankton map, or from their monthly reports.

While the recent bloom of A. sanguinea is not believed to be toxic for humans, the implications for wildlife could be more severe, depending on the intensity and concentration of the bloom.

In 2007, over 750 seabirds washed up to along the coast of Monterey, CA. At this time, it was unclear exact the culprit of the die-off as scientists had never documented an occurrence like it before. Ultimately, research indicated that the cause of the mass seabird stranding was a substantial bloom of A. sanguinea. Nearly one-quarter of the birds died as a product of the bloom. 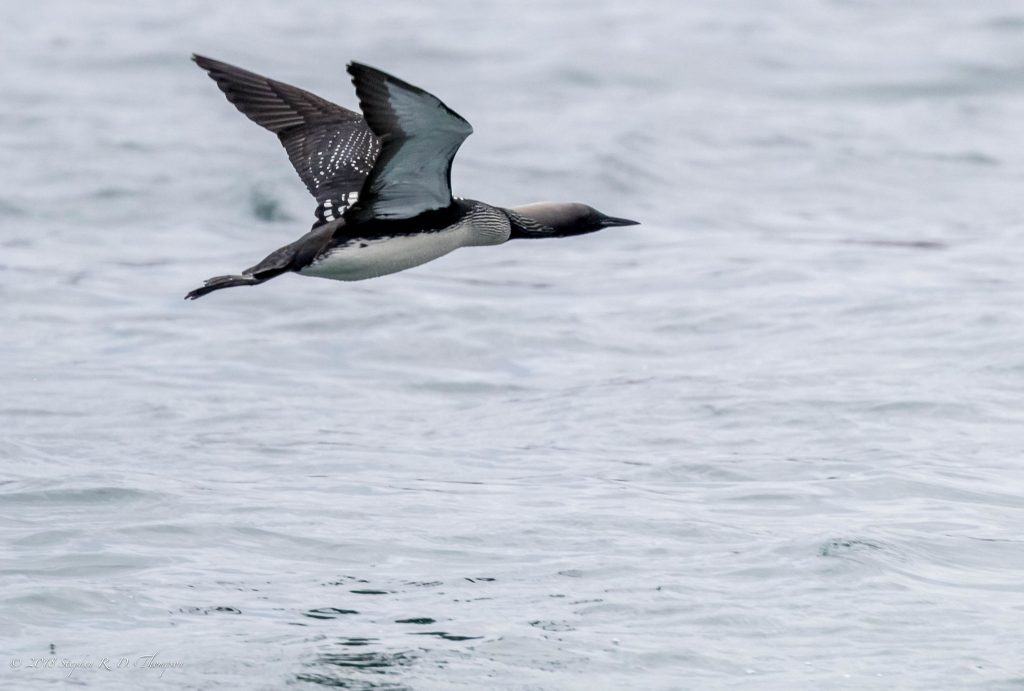 Many of the birds affected from the red tide in Monterey, California during 2007 were seabirds like the Pacific Loon, seen in the photo above. Photograph courtesy of Stephen R.D. Thompson, shared via Flickr under Creative Commons License.

In January of 2019, another bloom of A. sanguinea along the coast of Oregon and Washington led to one of the largest single mortality events of seabirds on the West Coast, killing over one thousand birds including scoters, common murres, common loons, red-throated loons and grebes.

While blooms of A. sanguinea can be associated with seabird die-off, the implications are not direct. Red tides and similar blooms of A. sanguinea have and do occur without detrimental impacts to wildlife. Toxins produced from the bloom may be amplified by other factors like weather and large waves, which could exacerbate its effects as seen in 2007.

Volunteering at the Estuary Program 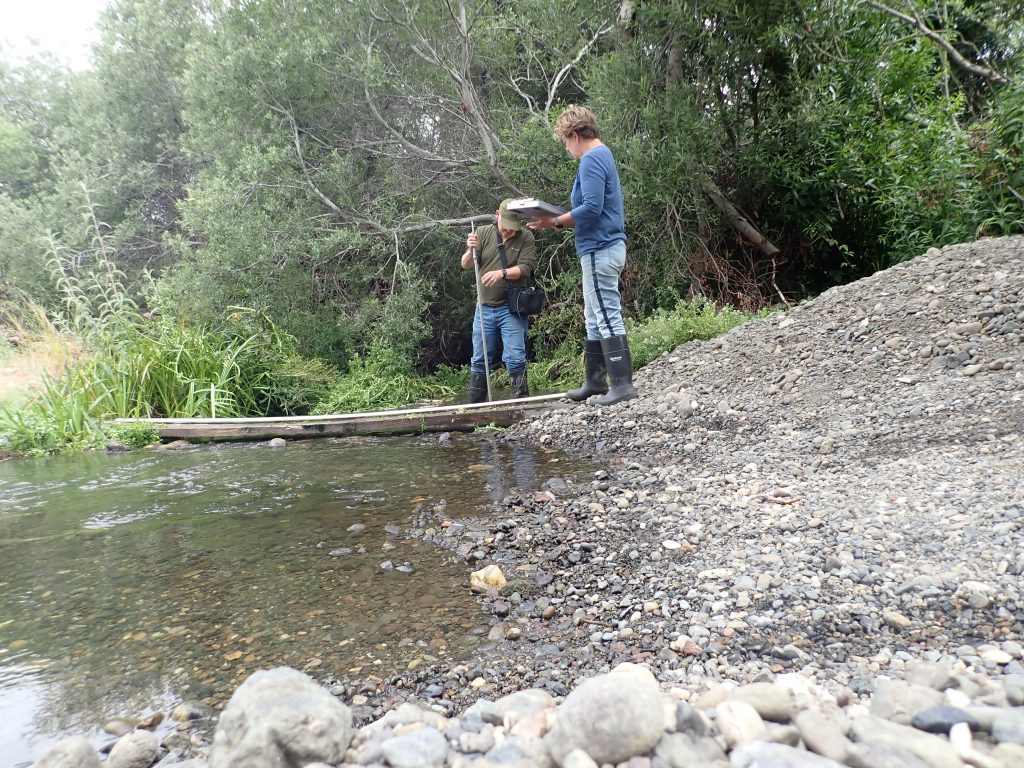 The Estuary Program waiting to bring on new volunteers until later this year or early next year, due to the uncertainty of the COVID-19 pandemic.

Due to the continued uncertainty of the COVID-19 pandemic, the Estuary Program has chosen to take a step back from recruiting new volunteers for the fall. Those interested in volunteering with the Estuary Program should reach out toward the latter end of the calendar year, as we begin to recruit volunteers in January for spring 2022 bioassessment.

In the meantime, be sure to stay tuned for next month’s field updates post, by subscribing to our blog.

Get it delivered to your inbox by subscribing today.