The Estuary Program has a local rain gauge network that compiles rainfall data and tracks hyper-local trends. This network relies on citizen scientists to gather rainfall data from their yards, schools, businesses, offices, or any outside space where a small rain gauge can sit undisturbed and collect the rain. 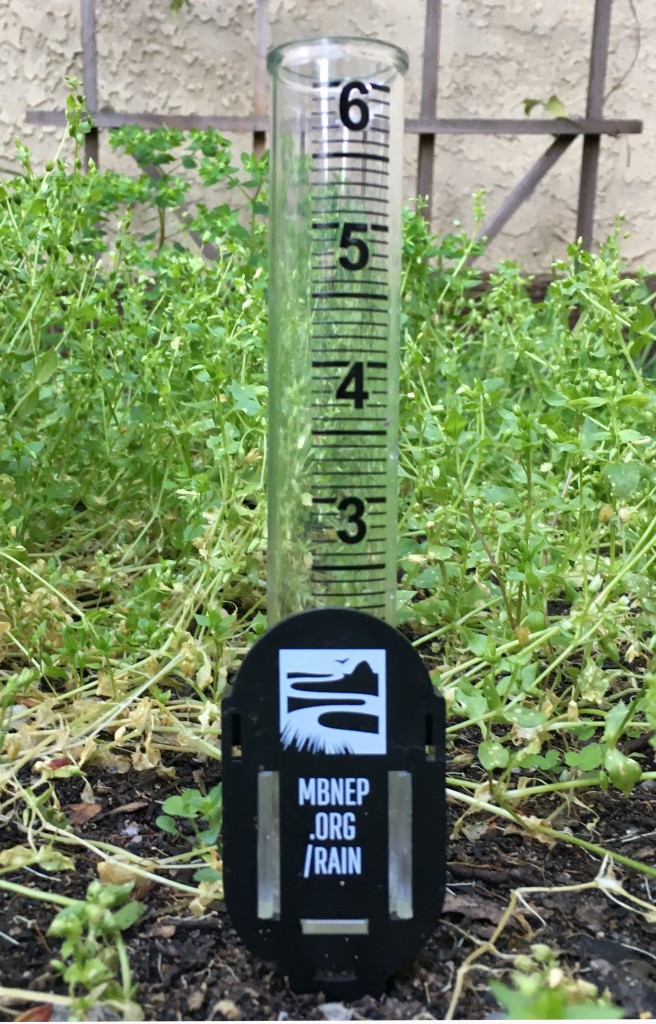 If you’re not already a part of the Morro Bay Rain Gauge Network, now is a great time to join! The Estuary Program provides free rain gauges like the one pictured above. Contact staff@mbnep.org to schedule a time to pick up your rain gauge, and start recording the rain at your home, school, or workplace!

October’s first rainfall generated enough runoff to raise the depth of water, known as stage height, on Chorro Creek by over one foot at peak flow. The stage height prior to the storm was approximately 4.44 feet, and at its highest point, the stage height reached 5.53 feet.

The photos show a section of Chorro Creek that was dry prior to the storm and fully connected and flowing shortly after the storm.

Although this rain event brought some much needed water to our creeks, the stage height in the days following the storm doesn’t appear to have changed drastically.

The graph below from SLO County’s monitoring site illustrates the stage height at Canet Road from pre-storm to post-storm. The dark blue line shows the recorded stage height compared to the creek bottom, which is indicated by the orange line.

Rainfall and stage height data, including graphs like the one here, can be viewed in real-time or downloaded from the County of San Luis Obispo Public Works Department webpage.

Even though the stage height at Canet Road didn’t change considerably in response to the October rainfall event, there are other ways the watershed continues to hold water. As rainfall soaks into the ground, it percolates down to the water table and recharges groundwater.

Recharging groundwater is important for a number of reasons. Humans rely on groundwater for drinking water, irrigation, and industrial purposes. Surface water systems like lakes, rivers and wetlands also rely on groundwater to keep them replenished. Groundwater provides a crucial source of water for these systems, especially during the dry season.

While we always get excited about the first rainfall of the water year, these flows typically have the highest levels of polluted runoff.

Pollutants build up during dry periods in places like streets and yards. Runoff picks up and carries these pollutants to the nearest storm drain, and then into a nearby creek or the bay. This is especially true in areas with a lot of paved surfaces where water isn’t able to sink into the earth.