When asked to think of an animal, most people picture something they are familiar with like a housecat, bluebird, mountain lion, shark, coyote, gopher, or some other mammal, fish, or bird. All of these species are vertebrates— animals that have a backbone. Though people are most familiar with vertebrates, 97% of animals worldwide are invertebrates, which lack a backbone and spinal column. The invertebrate group comprises an incredibly diverse array of species, including everything from soft-bodied earth worms and venomous scorpions on land to burrowing geoducks and colonial coral beneath the waves.

In this post, we’ll share four invertebrate species native to the Morro Bay estuary that have evolved shells or other tough exteriors to protect them from predators. 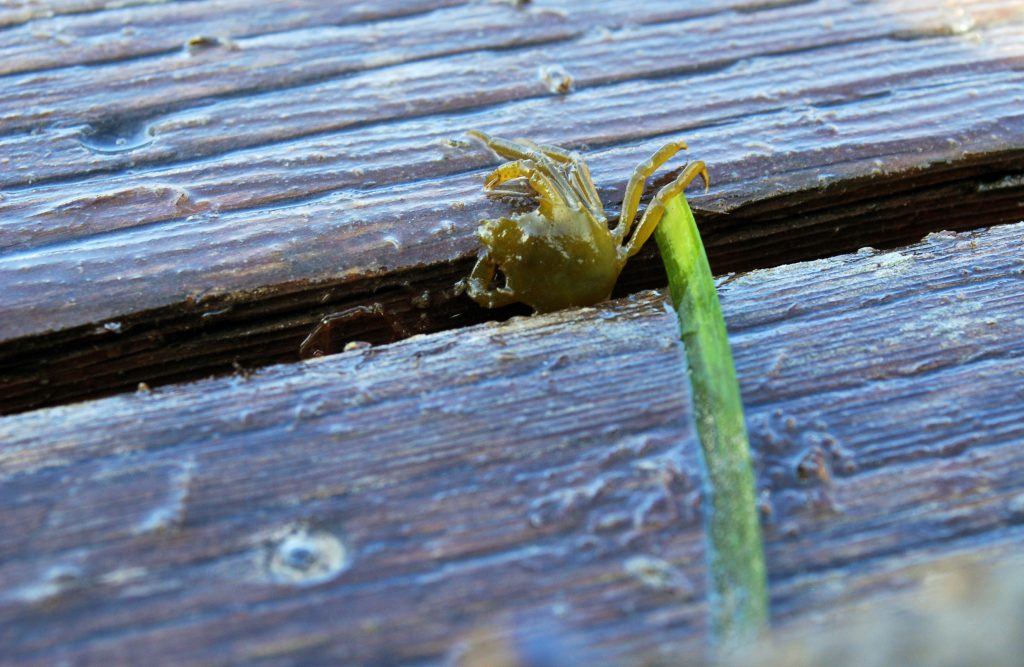 A small kelp crab hides between boards on a dock off the Embarcadero in downtown Morro Bay.

Multiple species of chiton live on California’s central coast. Each of these prehistoric looking creatures has eight bony plates that protect it while allowing the animal to flex and move to forage, and even to curl up to fend off predators. Chitons are sometimes called coat-of-mail shells for their armor-like exterior.

Kelp scallops are small clams that live in salty waters, including the Morro Bay estuary.

Scallops may look helpless and unassuming, but they can make a hasty escape when needed. To do this, they open and close their shells quickly, forcing out water in a jet behind them, propelling themselves forward. Check out this video from New York Post that shows a scallop swimming off the shore of Australia to see how quickly they move.

Limpets are marine snails with cone-shaped shells, like the mask limpet in the photograph below. To stay moist, they use their muscular foot to cling tightly to rocks during low tide. This keeps water from evaporating out of their soft bodies in the open air. When the tide comes back in, they ease their hold and move around to graze.

Watch this video from the Monterey Bay Aquarium that shows how different the life of a limpet is when it’s exposed to the open air than when it’s below the water line.