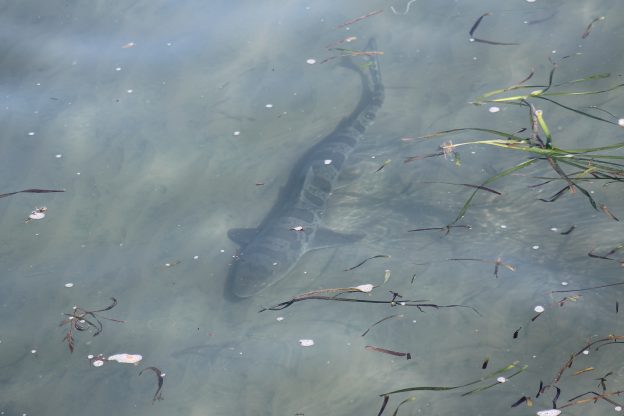 When you think about sharks, what comes to mind? Chances are, you’ll picture a tall, angular fin cutting through the waves and rows upon rows of sharp teeth. You might even picture a shark attack from the movies, with people fleeing up the beach and away from the waterline.

It’s less likely that you’ll picture one of the three sharks that thrive in Morro Bay’s protected waters, the swell shark, leopard shark, and horn shark. These diminutive sharks are not the stuff of horror movies, unless you’re a small fish, clam, innkeeper worm, crab, or any of the other mollusks and crustaceans that these bottom-feeders feast on. In their own habitat, including the sandy bottom of Morro Bay, these sharks are at the top of the food chain. 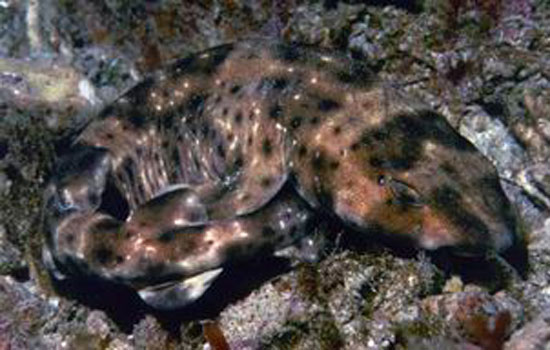 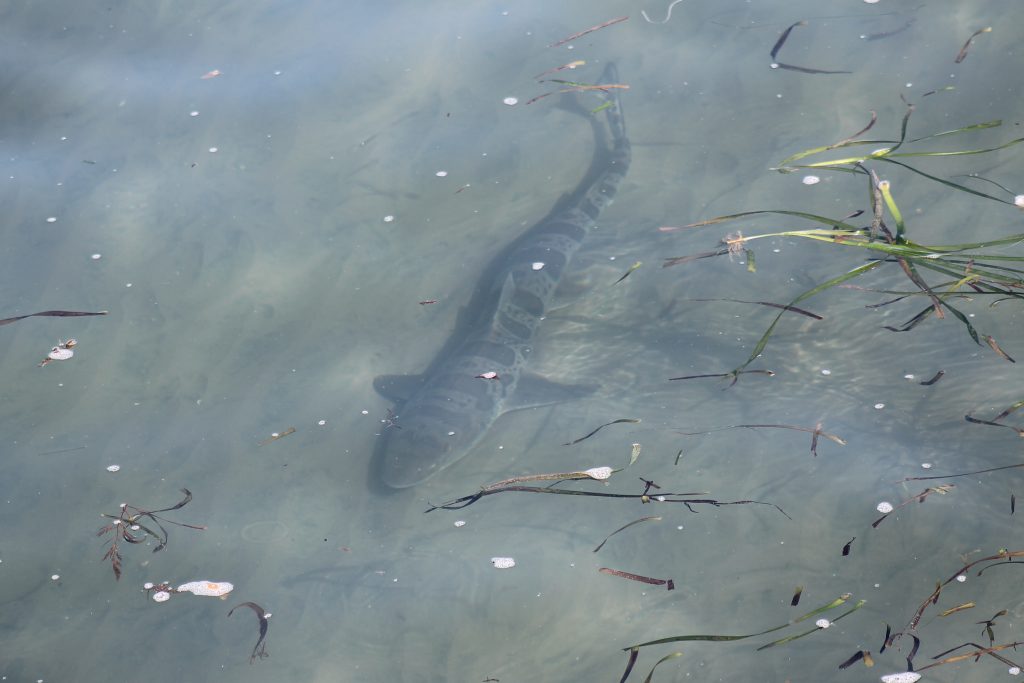 A leopard shark swims along the sandy bottom. Photograph courtesy of Jon. D. Anderson, via Flickr through a Creative Commons License. 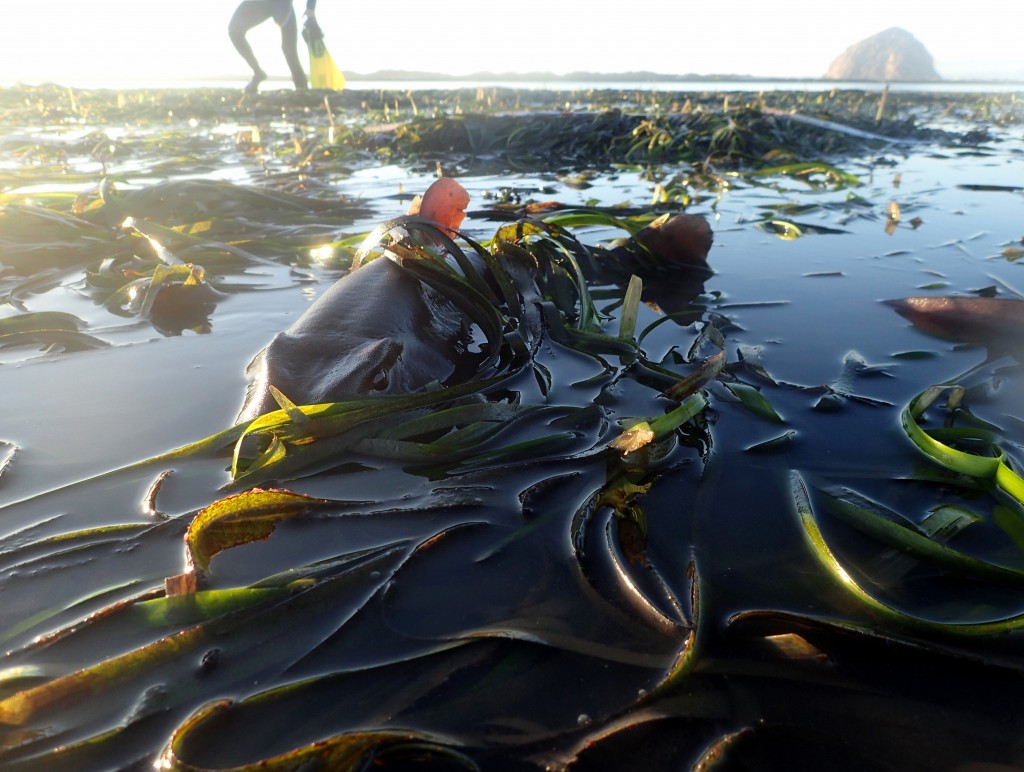 This horn shark hid in the eelgrass bed at State Park Marina as the tide receded. Horn sharks aren’t known for their speed and graceful swimming. Rather, they move slowly and like to hide among crevices in rocks, in kelp, and in eelgrass beds like this one was doing.

It is true that sharks are fierce predators, but humans are very unlikely to be their chosen prey. In fact, studies show that people are thirty times more likely to be killed by lightning than by a shark, according to the International Shark Attach File (ISAF). The map below, created by ISAF, shows the numbers of unprovoked shark attacks per county since 1926. San Luis Obispo County falls in the middle of the range with a total of 11 shark attacks. For more specific information about shark attack locations across California’s coast, you can visit the Shark Research Committee for a list of shark attacks  between 2000 and the present. 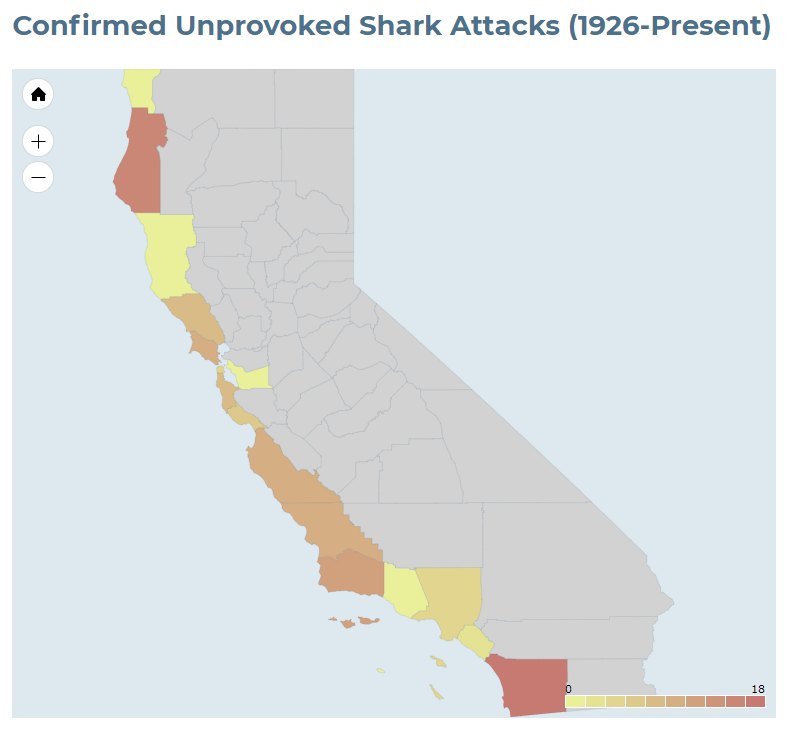 This map, created and published by the International Shark Attack File, shows the number of shark attacks per county in California since 1926.

Though the Los Angeles Times reports that West Coast saw five more shark attacks in 2017 than in 2016, it remains to be seen whether or not these numbers will track with the growing population of white sharks off California’s coast. This is one of the questions Assembly Bill 2191, which would establish the White Shark Population Monitoring and Beach Safety Program, seeks to answer. The bill is made its way though the California State Legislature, was approved as part of California’s budget on June 15, and is now on its way to the Governor’s desk. If it is signed, it will fund shark research, including tagging and monitoring programs, and may also provide funding for lifeguards and beach safety programs.

People’s fear of sharks is understandable; these large, toothy, carnivorous fish have been around for human’s entire evolutionary history. (Scientists have found fossils of shark scales from 450 million years ago, and shark teeth from 400 million years ago.) Avoiding contact with them has, likely, always been a wise decision. 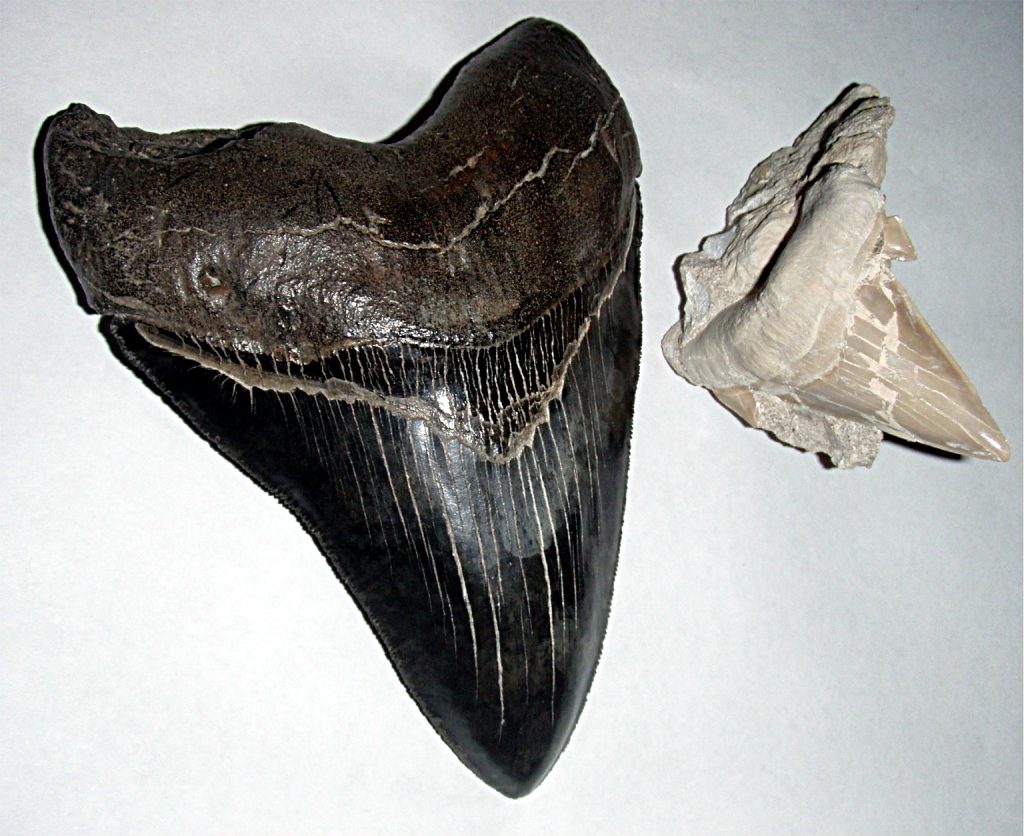 This picture shows a fossilized megalodon shark tooth on the left, and a great white shark tooth on the right. Megalodon sharks are thought to be the largest sharks ever to live. While estimates vary, researchers believe they lived between 70 million and 3 million years ago, before going extinct. Photograph by Brocken Inaglory, via Wikimedia Commons.

Despite this, sharks, as apex predators, are an indispensable part of the food web. The fact that there are more sharks may indicate the success of conservation efforts, which are allowing them to return and, in their turn, to provide balance to marine ecosystems.