Music to a science educator’s ears, of course, thanks to the astonishing colors and reasonably viewable size of one of California’s most iconic sea slug species, the Opalescent Nudibranch (Hermissenda opalescens). Found throughout the Central California coast, these brightly-colored carnivores are often the first nudibranchs to astonish and delight the humans venturing into their intertidal world during seasonal low tides. 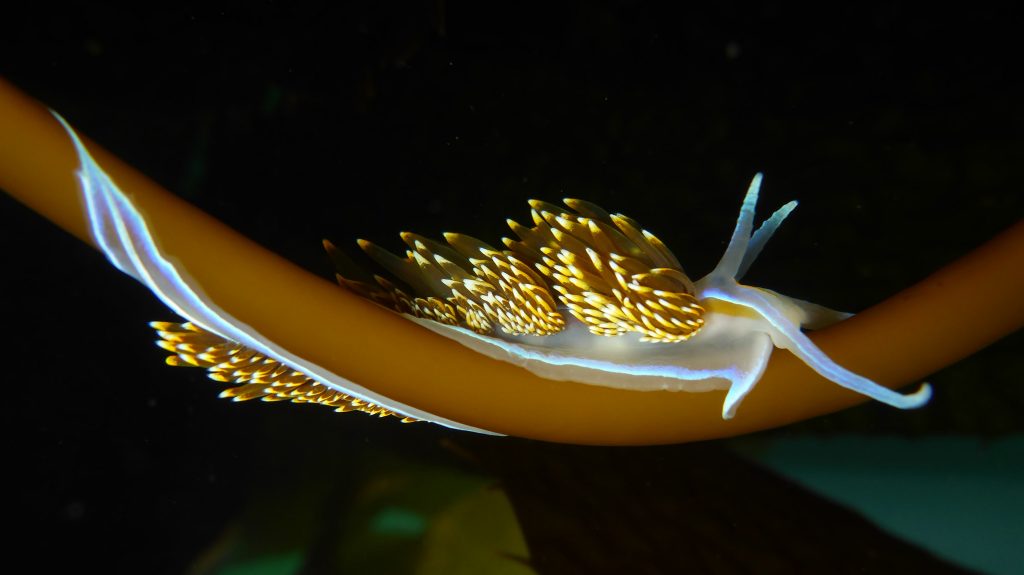 Nudibranchs are shell-less marine mollusks that primarily prey on live hydroids and sponges, depending on the species of nudibranch. While many nudibranchs’ diet is highly specialized, often limited to a single species, Opalescent Nudibranchs are a bit more voracious. They have been documented eating hydroids, bryozoans, small anemones, jellyfish, and even each other.

Not only are they impervious to the stinging cells—called nematocysts—of their prey, they actually absorb the nematocysts intact. These ‘stolen’ nematocysts are stored in the white-tipped “fluffs” on the Opalescent Nudibranch’s back, called its cerata, part of a specialized digestive tract that also doubles as a respiratory system. This is an excellent defensive mechanism for an animal that is otherwise relatively defenseless and slow. If a predatory fish ignores the flashy warning colors of the Opalescent Nudibranch and goes in for a bite, it gets the same sting it would as if it had bitten an anemone or a hydroid.

In case you’re wondering, these nematocysts are generally too weak to penetrate human skin, except for that one time when I received a wallop of a sting while photographing a very large Opalescent Nudibranch that had been feeding on dead jellyfish that had drifted inside a harbor. Yowza. 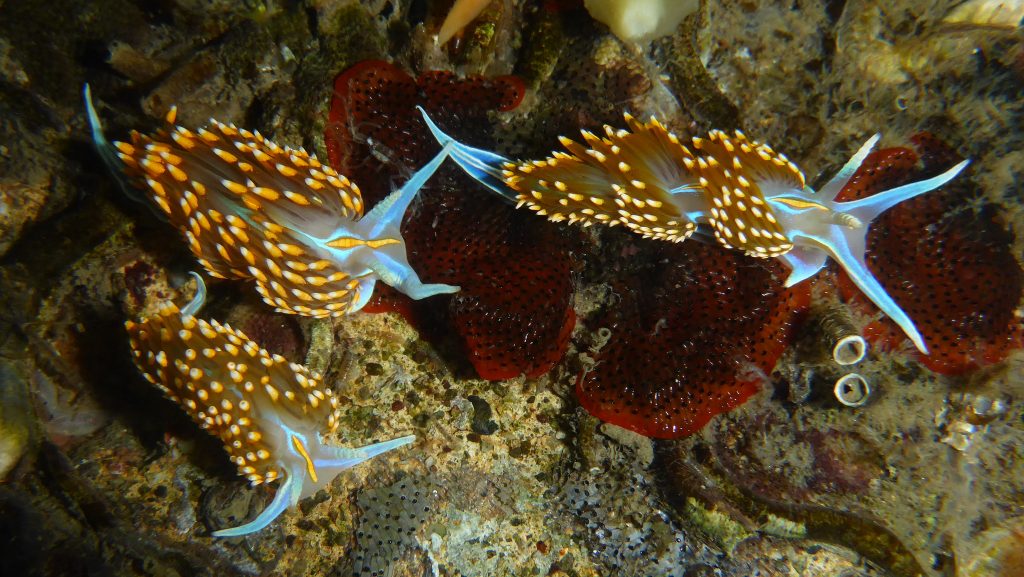 Given their pugnacious nature, it comes in very handy that Opalescent Nudibranchs can regenerate critical sensory body parts that are lost to predators or others of their own kind. While most Opalescent Nudibranchs that are missing an oral tentacle (food-sensing organs on either side of the mouth) or a rhinophore (chemical receptors on the top of their head) eventually will regrow it as before, occasionally you may find a nudibranch with forked (or multiple) regenerated organs. 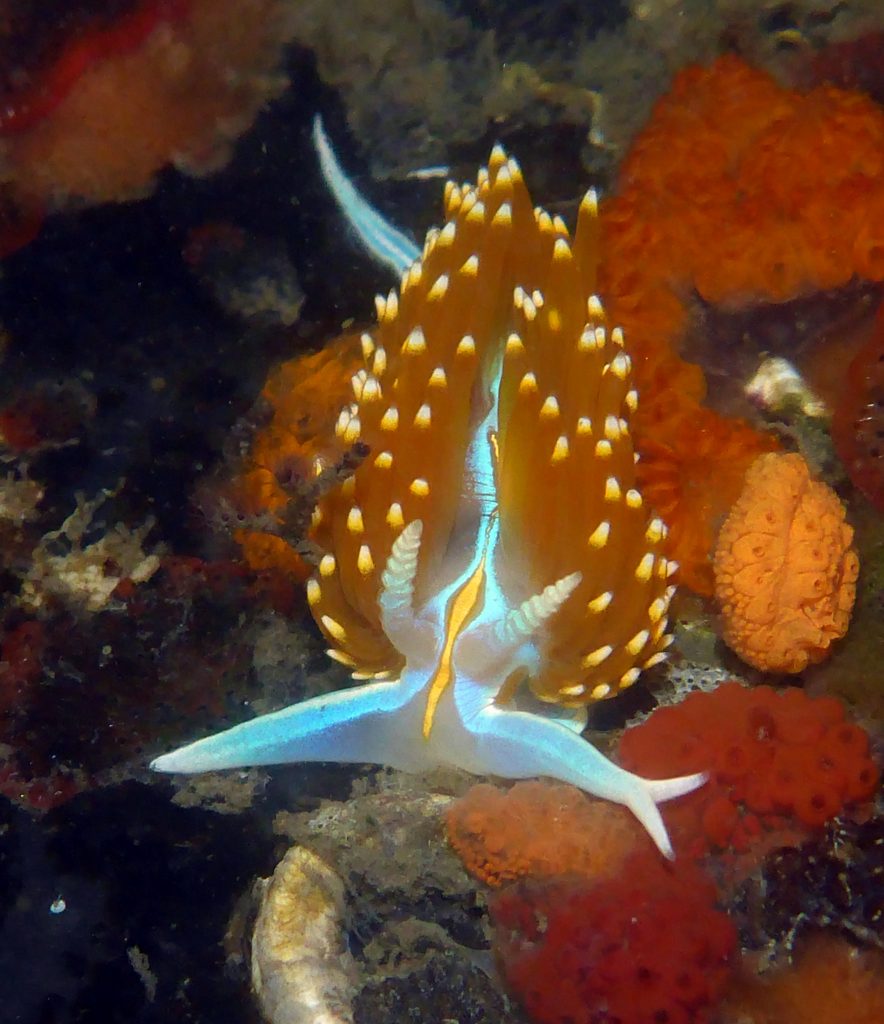 Opalescent Nudibranchs have been used in laboratory settings for many years, as a model species for neurology, ecology, pharmacology, and toxicology research. However, this research may need to be revisited. In 2016, nudibranch researcher Dr. Ángel Valdés, a professor in the College of Biological Sciences at Cal Poly Pomona, pointed out that there are in fact three species of Hermissenda, not one, with two species present in California (the third is found in Japan and Russia). They are not difficult to distinguish, particularly if you have a clear photograph of the cerata. H. opalescens has a white tip on each cerata, whereas H. crassicornis has a long white line running up the front of each cerata and no white tip. Both species are about the same size—they can grow to eight centimeters, although less than five centimeters is more usual. 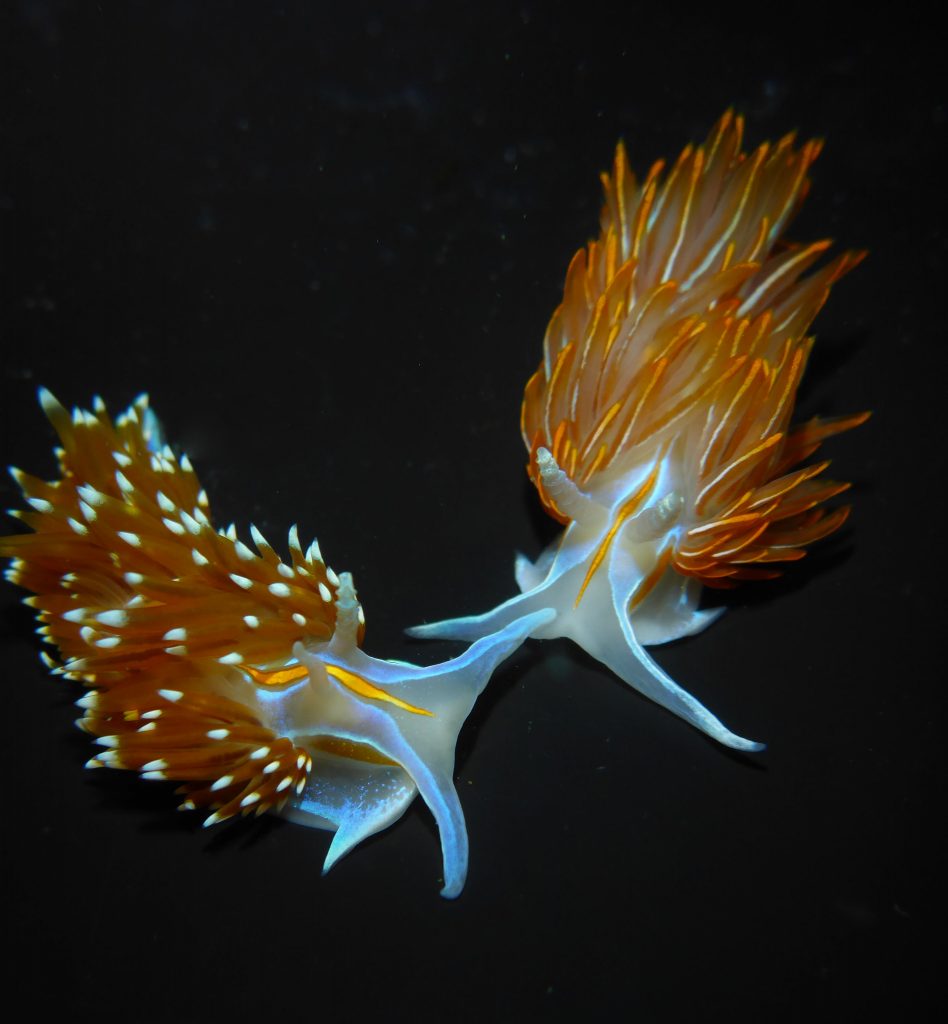 Austin L. Ka’ala Estores-Pacheco, a graduate student in the College of Biological Sciences at Cal Poly Pomona, is working with Dr. Valdés to expand upon the findings of his 2016 paper. “I’m looking at the behavior of the two Eastern Pacific species—particularly to see if the species can mate—as well as doing next-generation DNA sequencing,” she said. “In the 2016 paper, Dr. Valdés discovered that the nuclear DNA was the same across all three species, and that it was the mitochondrial DNA that distinguished them. I’m expanding the sample size of the mitochondrial DNA work and looking at smaller fragments of the nuclear DNA to perhaps see differences that may be evident with a smaller fragment size.”

Whether you are an experienced biologist or a first-time tidepooler, there is always something new to be discovered—Opalescent Nudibranchs are a fascinating place to start.