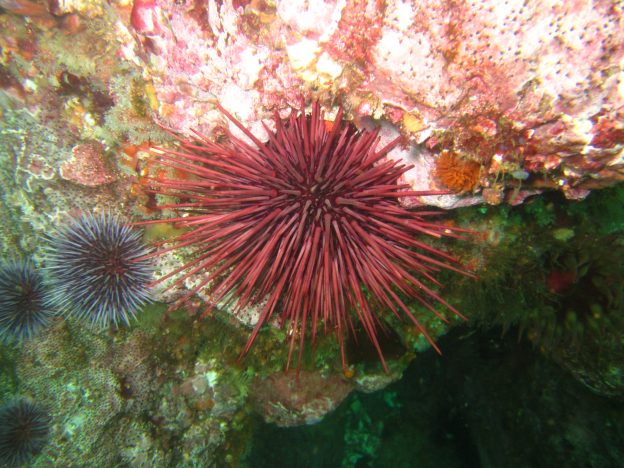 Sea urchins use their spikes and poison as a defense mechanism. The poison is located at the base of their spines in their pedicellariae, which are tiny jaw-like structures that can clasp onto a victim and inject a painful poison. Don’t worry—you are more likely to die from an infection from the open wound than from the poison itself. With proper medical care, you should recover quickly.

The photo above shows purple sea urchins and the photo below shows a red sea urchin. Do you see the difference?
Photo Credit: James Maughn through Flickr via Creative Commons License 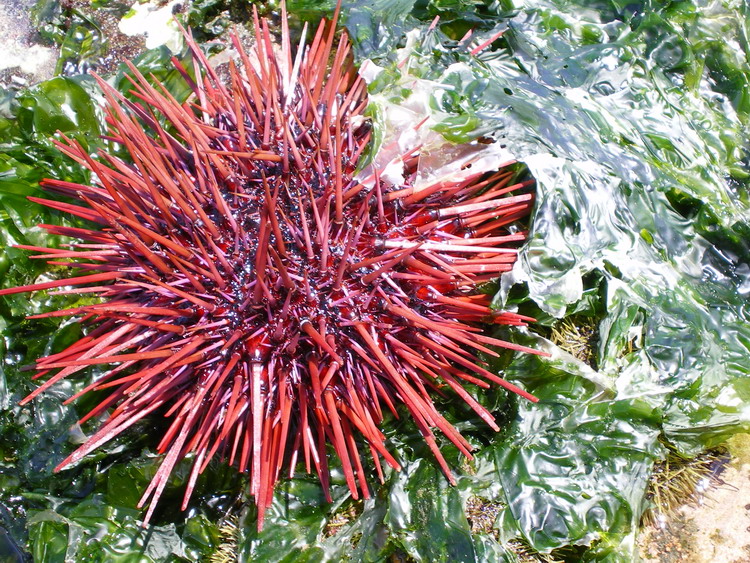 What do sea urchins eat?

They both eat kelp, algae, and decomposed creatures. Mmmmm, tasty!

How to spot them

You can find red and purple sea urchins from Alaska to Baja California. They often attach themselves to hard surfaces like pilings or jetties. They reside in shallow waters to waters as deep as 100 meters. The easiest way to spot them, if you are not a certified scuba diver, is to go to the tide pools during a negative tide. Field trip time! Want to know when it’s a negative tide? Check this page out! Don’t know where to find tide pools in SLO county? Check this website out! 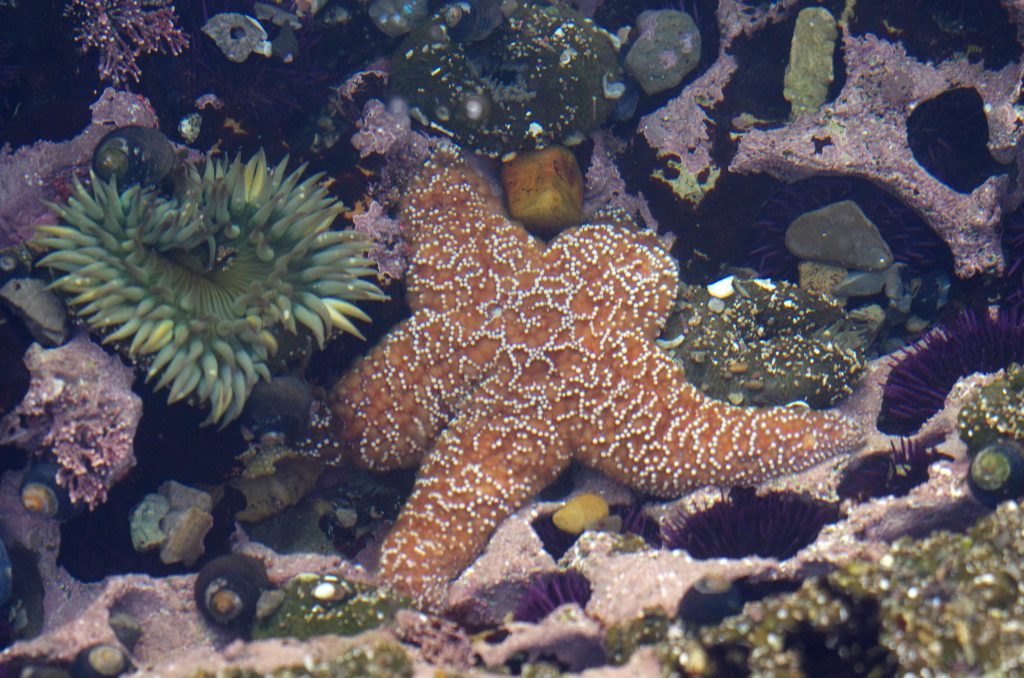 This tide pool was found at Montana de Oro! Can you spot the sea urchins?
Photo Credit: sarowen through Flickr via Creative Commons License

The problem of sea urchins and kelp forests 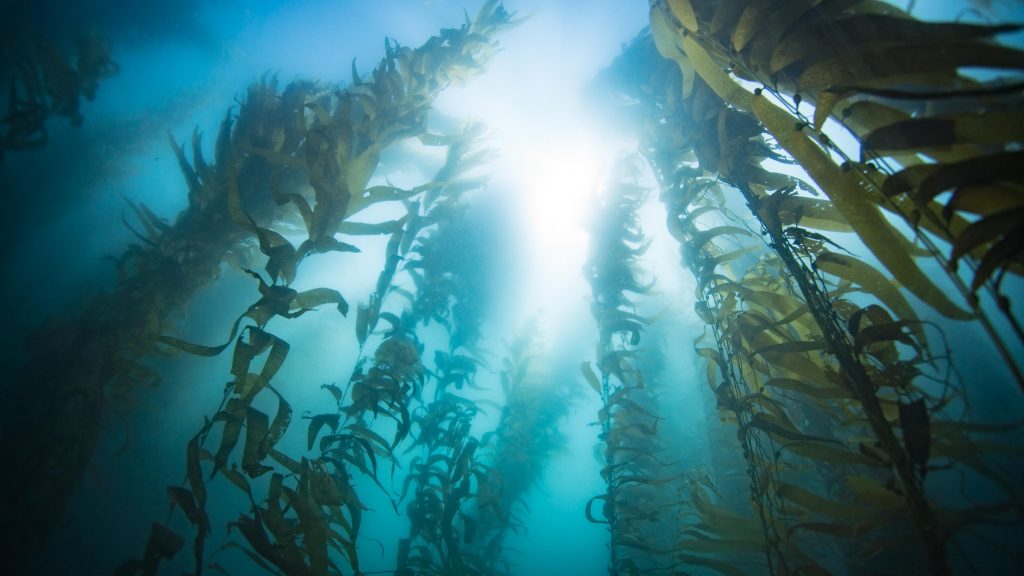 Did you know that many animals depend on the kelp forest for food and shelter? Kelp forests, just like estuaries and coral reefs are super important because they support a diverse range of species, often referred to as biodiversity. To learn more about kelp forests, check this article out from Oceana! Photo courtesy of Camille Pagniello, California Sea Grant, through Flickr with a Creative Commons license.

Why are purple sea urchins taking over? To put it simply, rising water temperatures in the ocean appear to be the main factor. These warmer conditions make lengthen the spawning season for purple sea urchins, since they tend to mate during the summer season when the water is warmer. This gives the species the opportunity to produce a lot more offspring.

Adding fuel to the fire, sea star wasting disease, also known as sea star wasting syndrome, came and killed between 50­% and 95% percent of sea stars in affected areas along the Pacific coast, beginning in 2013. This disease is not new; it has appeared sporadically in the past and killed smaller numbers of sea stars. Scientists think that the rising temperature of ocean water and the resulting ocean acidification may have spurred this unprecedented surge of diseased and dying sea stars. These two factors add stress to sea stars, making them more susceptible to the syndrome.

Sea stars are not the only predator of urchins, but they do consume a lot of them. So, when the wasting syndrome caused this massive die off, it greatly reduced the number of sea urchins being eaten, leaving more of them to reproduce, compounding the imbalance of species in the kelp forest. 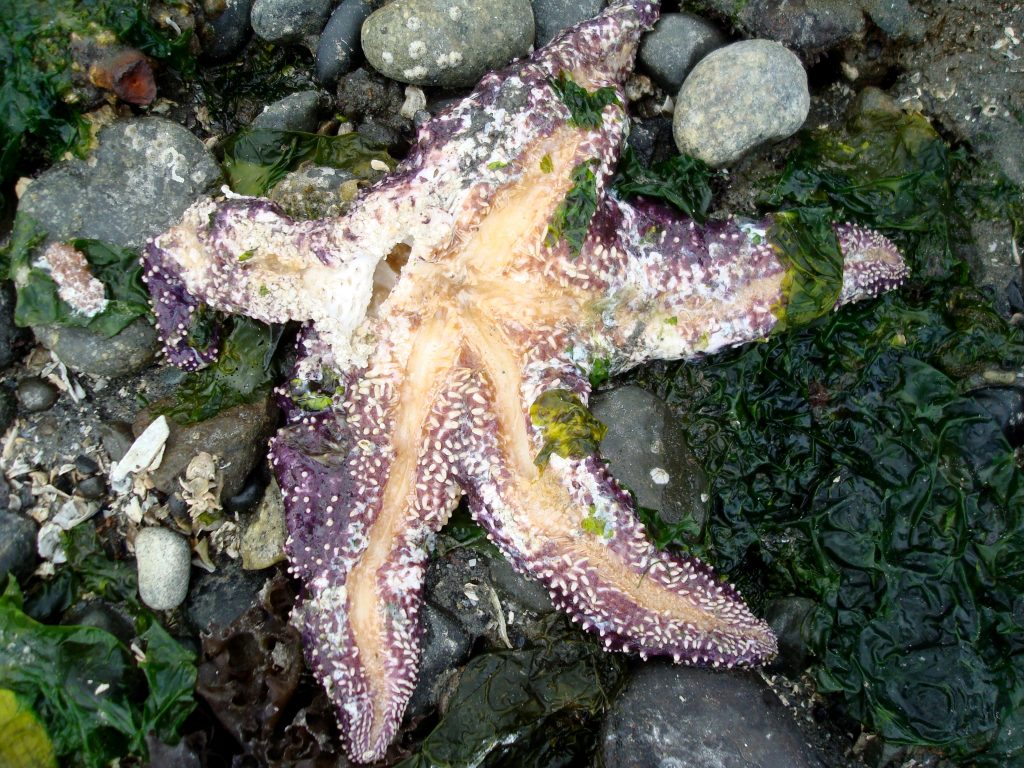 Sea star wasting syndrome initially causes lesions in infected sea stars. From there, it quickly consumes the sea star leaving it as a dismantled “zombie” sea star. Though the wasting syndrome hasn’t disappeared, fewer deaths are being reported. This could be, however, because there are fewer sea stars in general, meaning that there are fewer that can be infected and die.
Photo Credit: alisonleighlily through Flickr via Creative Commons License

Are kelp forests done for?

There is still hope for kelp forests. They benefit from an unlikely hero, a fluffy one that swooshes through the water and dives down into the depths of the salty sea in search of food. This hero is the California sea otter. These mammals have a generalist diet, meaning that they eat a wide variety of foods. They learn what to eat from their moms when they are pups.

At one point, sea urchins were actually hard to find along the California coast. This caused a cultural memory loss, meaning that sea otter moms could not teach their new pups how to eat sea urchins since there were so few of them. Fast forward to today, and there are a lot of sea urchins, but it takes a while for the sea otters to learn how to eat them and to pass that knowledge along. Thankfully, sea otters are fast learners and they are already munching away. 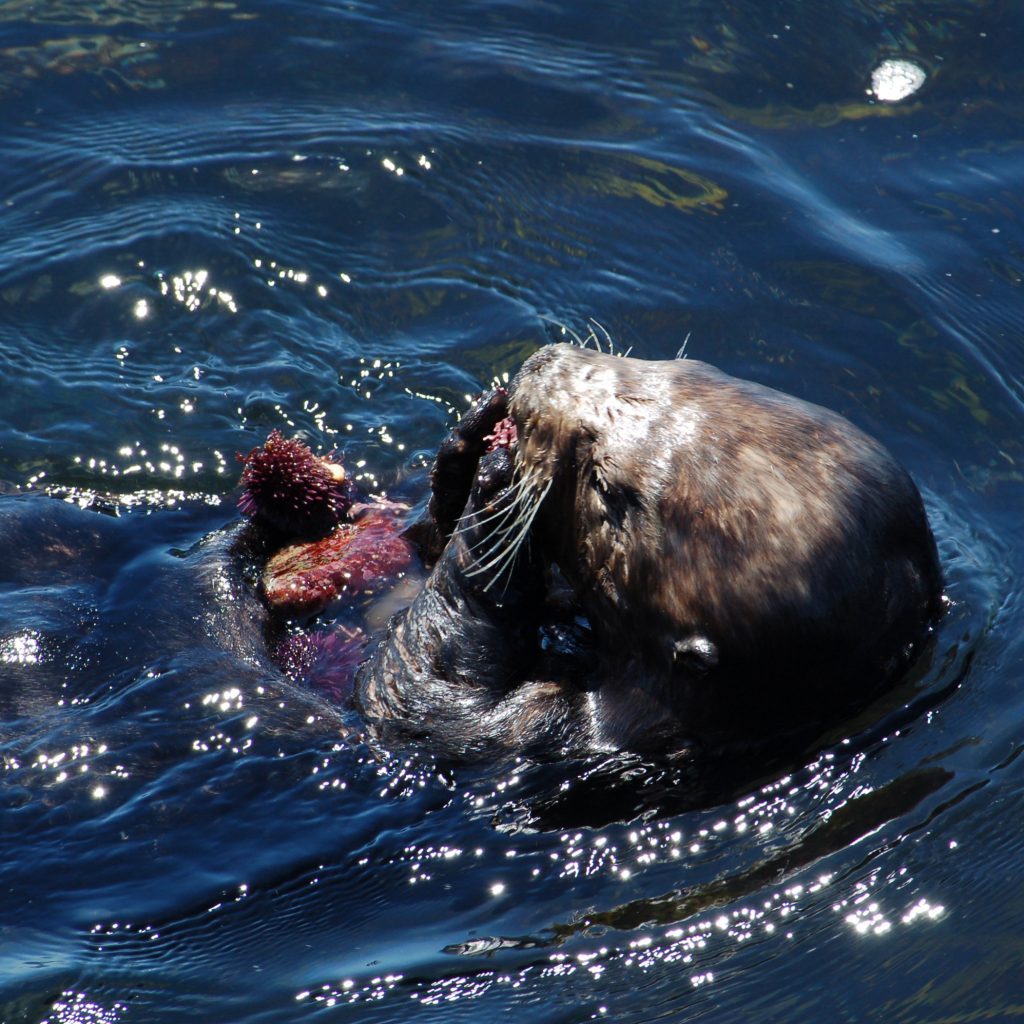 Otters are not the only ones eating more purple sea urchins than they used to, humans are too! Historically, red sea urchins were more often harvested for eating than purple sea urchins because they have much more meat. Now, people are harvesting purple sea urchins, too. A lot of the sea urchins harvested here in California are sent to Japan and used for sushi. Some sushi restaurants on the Central Coast serve it, too, but you won’t see “sea urchin” on the menu; you’ll see it listed as uni.

When sea urchins are harvested to eat, and processed we see another problem with overpopulation, which is that a lot of the sea urchins are starving. We know this because some of the harvested sea urchins have almost no flesh inside. This is due to the lack of food available to the ever-growing population of purple sea urchins, and the diminishing food source in the form of kelp.

Though this is an unfortunate thing for the sea urchins, it will likely reduce their population, putting their numbers back in balance with the resources that they need. This will be good for kelp forests and other species. Once the sea urchin population declines, there will be healthier sea urchins and— hopefully—less kelp forests being devoured.

If you want to learn how uni is harvested? Check this video out!

Here are some more sea urchins! Can you tell which one is a red sea urchin?
Photo Credit: vagabondvince310 through Flickr via Creative Commons License

Kato, Susun, and Stephen Scheoerer. “Biology of the Red Sea Urchin, Strongylocentrotus Franciscanus, and Its Fishery in California.” https://swfsc.noaa.gov/publications/CR/1985/8550.PDF. NOAA, 1985.