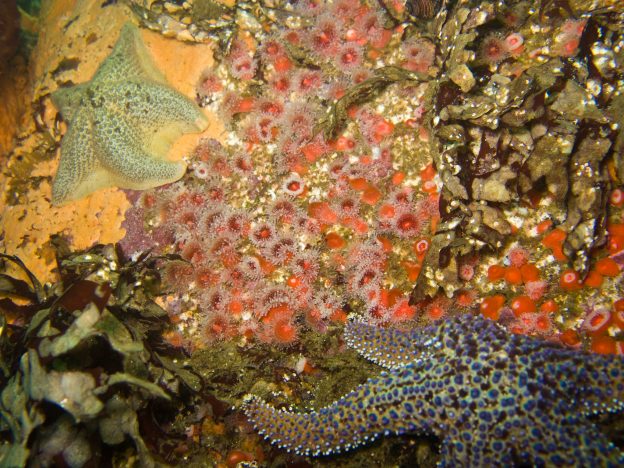 A diversity of wildlife populates the Morro Bay estuary and the variety of habitats that surround it, from the low-lying saltmarsh to the rocky tops of the Morros. Each of these species has at least one, typically two, and sometimes a plethora of names. Take the six-legged, many-egged specimen below.

Meet the toe-biter (Abedus genus): a bug of many names

This is an aquatic bug that lives in the creeks that drain into Morro Bay. It’s a bug with many common names: toe-biter, true bug, giant water bug, and ferocious water bug. Scientifically speaking, it’s a member of the Abedus genus, the Belostomatidae family, and the Hemiptera order. It’s also a hard-working father, as the grey balloon-like structures on its back are actually eggs, which he will tend to until they hatch. 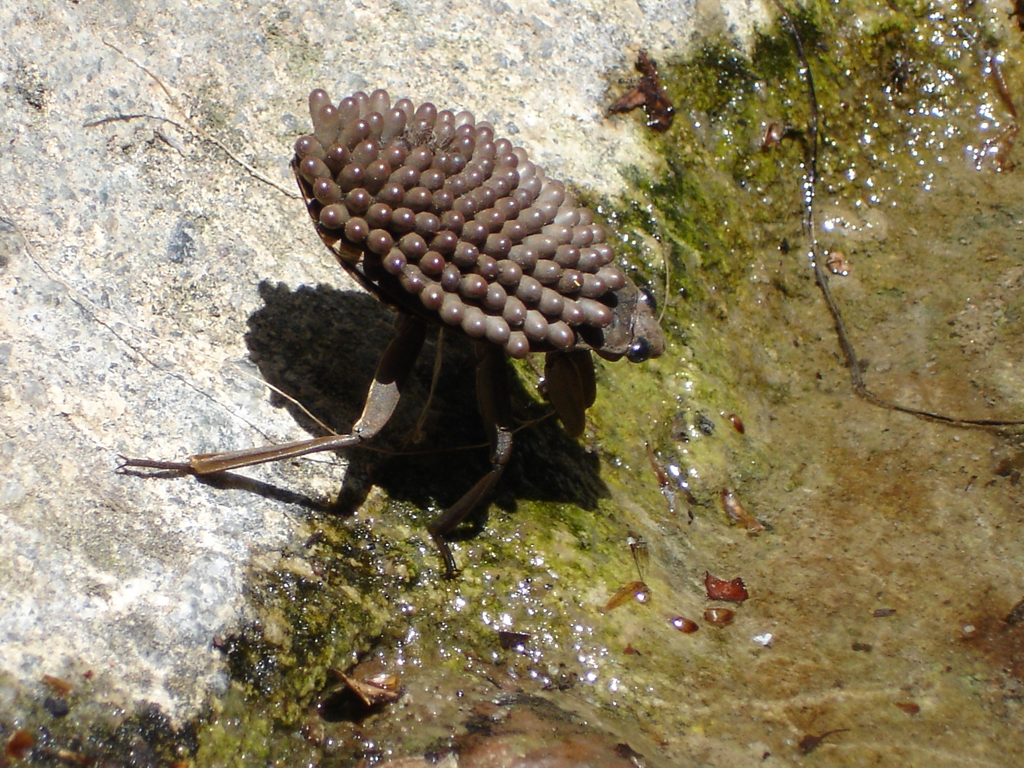 Giant water bugs, also known as toe-biters are large invertebrate predators with a powerful bite! Females typically deposit their eggs onto the males’ back, and the male toe-biter keeps the eggs safe until they hatch. Photograph courtesy of KQEDquest, shared via Flickr under a Creative Commons license.

Here is an Abedus found during one of our annual bioassessment surveys. These bugs are fearsome predators in the riparian habitat that lines our local creeks. They have piercing mouthparts and a venomous bite, which has earned them the most-common of their names: toe-biter. While that bite is deadly to the bug’s prey, it is painful but not dangerous for humans. 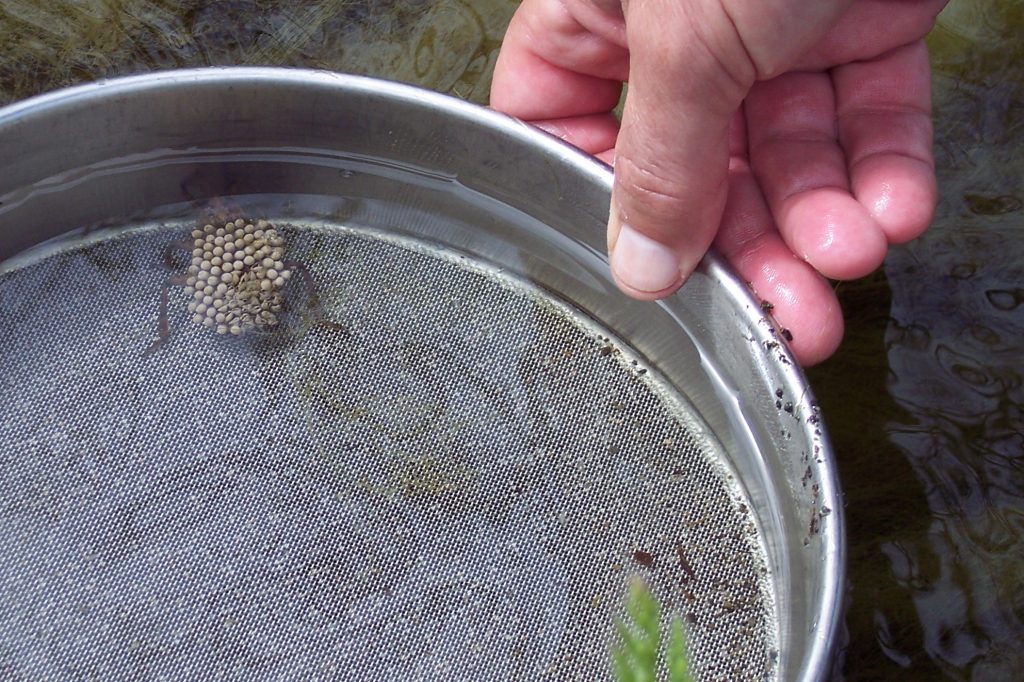 In today’s Photograph Friday post, we’re celebrating this diversity in lifeforms and names in a fun way, by highlighting a selection of local plants and animals with interesting common names. Specifically, we’re focusing on plants that are named after animals and animals that are named for fruiting plants. Check them out below! 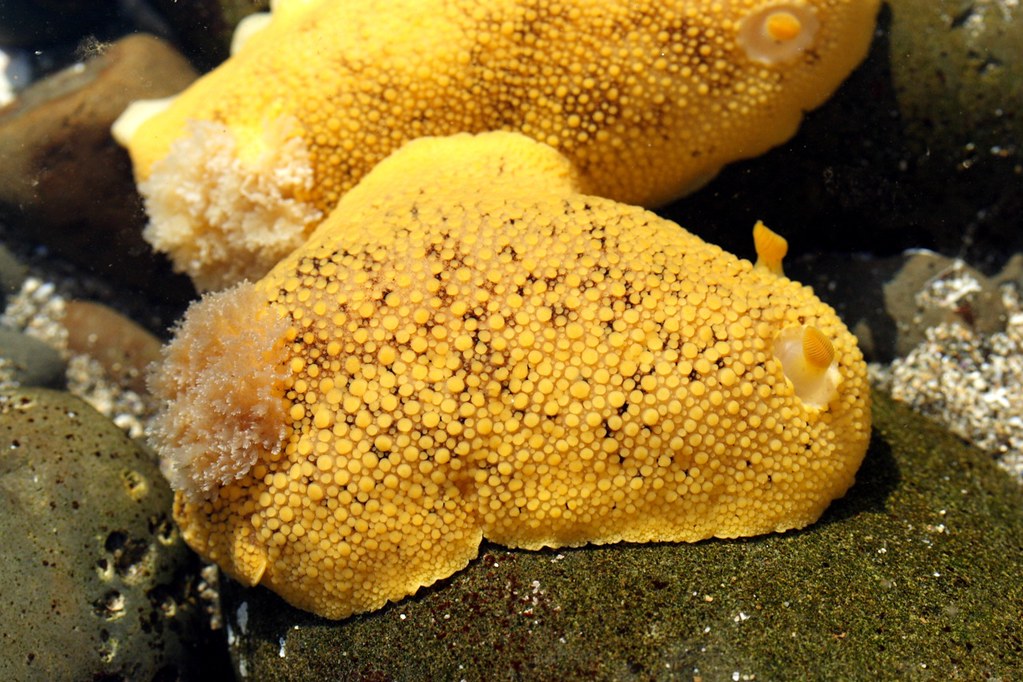 Two sea lemons on a rock underwater photographed by Ken-ichi Ueda, shared under a Creative Commons license on Flickr.

Find out how sea lemons taste and smell to predators.

Like their garden-variety namesakes, California sea cucumbers are harvested as food. Learn more. 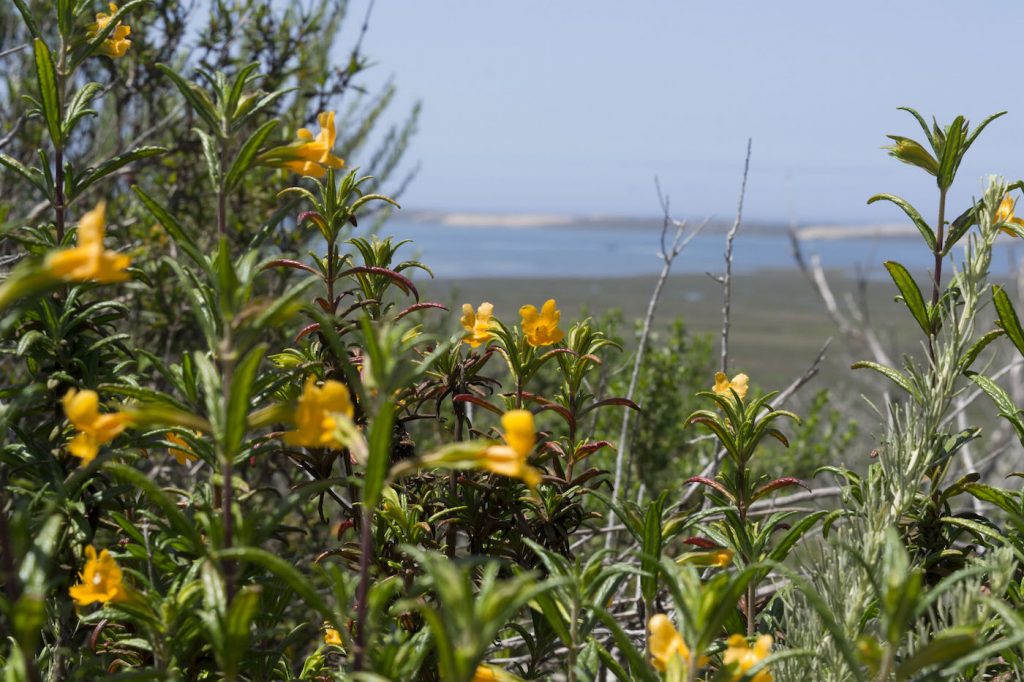 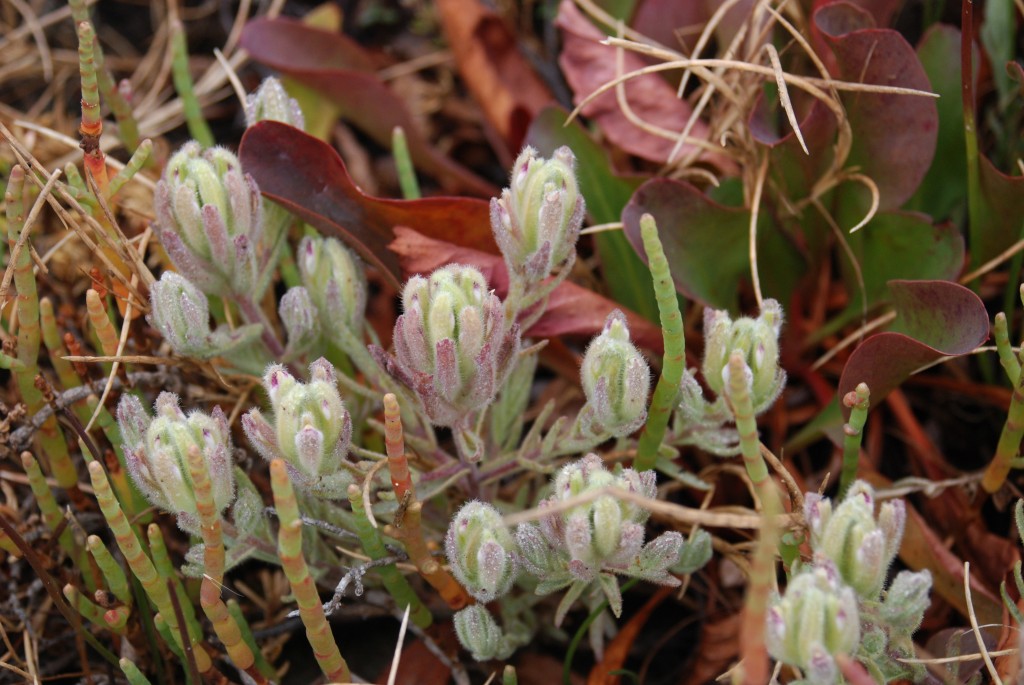 Salt marsh bird’s beak grows in the low marsh along the edge of the Morro Bay estuary. 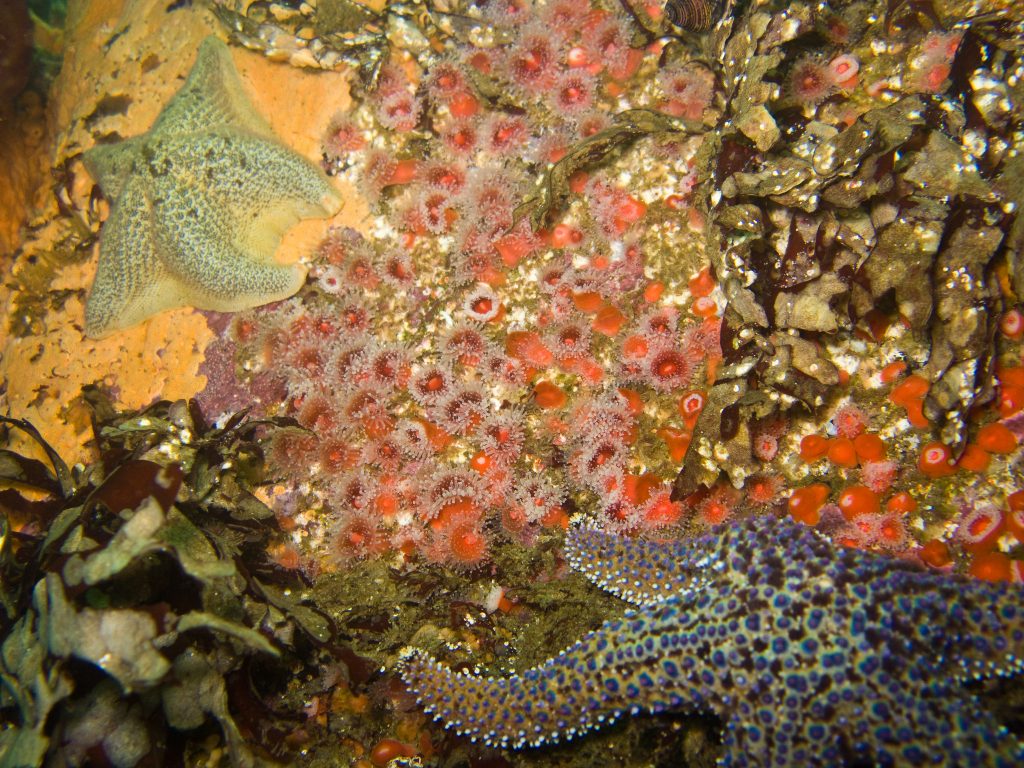 Two sea stars sit on the outside of a patch of strawberry anemones. Photograph “The Palette” by Ken-ichi Ueda, shared via Flickr under a Creative Commons license.

Learn where you can find strawberry anemone hanging around. 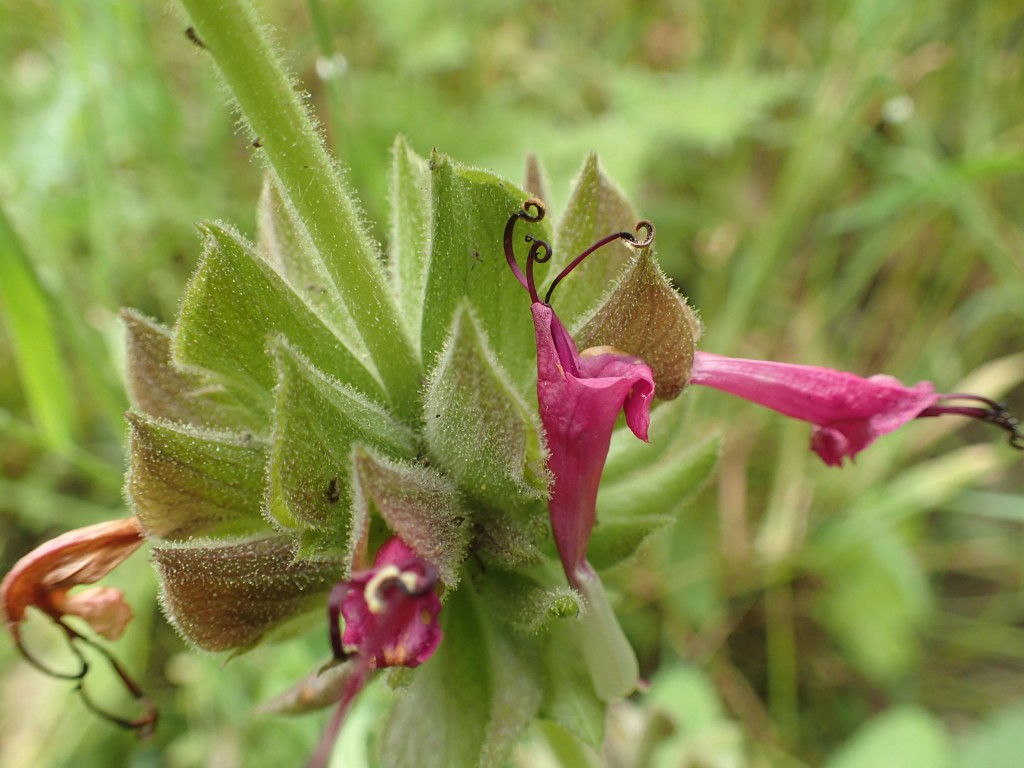 This drought-tolerant native plant grows wild and can be cultivated in gardens. 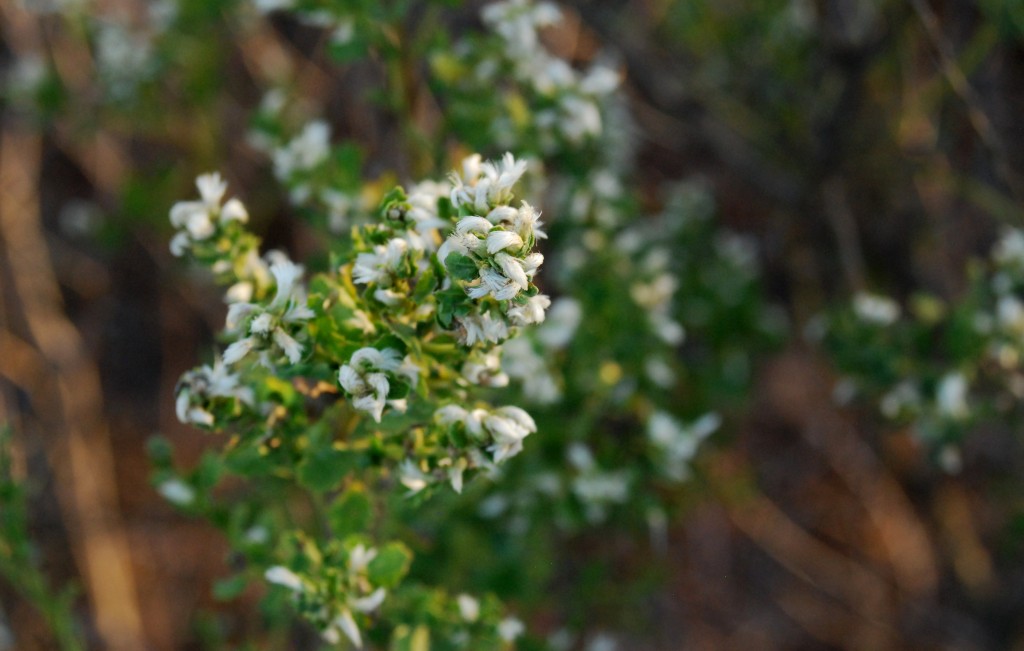 Can you think of more local plants or animals with names that fit this pattern? Share your photograph and the species name to Facebook, Instagram, or Twitter and tag us! Instagram/Twittter: @morrobaynep Facebook: @mbestuary. We’ll enter your name into our August 6, 2021 drawing for a set of reusable sustainable utensils. They’re made from wheat and can be composted at home after a long life of accompanying you on camping trips, picnics, and other outdoor adventures.