Morro Bay’s salt marsh is a special area. It is here that our creeks deliver freshwater to the bay, and incoming tides push salty waters up through the marsh’s system of channels. This unique habitat supports rich plant and animal diversity, but this is a delicate balance that can be disrupted by nonnative species.

European sea lavender (Limonium duriuscilum) is an invasive species of concern here on California’s central coast. It can crowd out native marsh plants such as California sea lavender (Limonium californicum) and endangered salt marsh bird’s beak (Chloropyron maritima) by outcompeting them for resources such as nutrients. In general, native species tend to be more beneficial because plants and animals have adapted to rely on them over time. For example, Crotch’s bumble bee (Bombus crotchii) gathers pollen from salt marsh bird’s beak to feed its young. Without this native plant, there would be less food available to the bee. 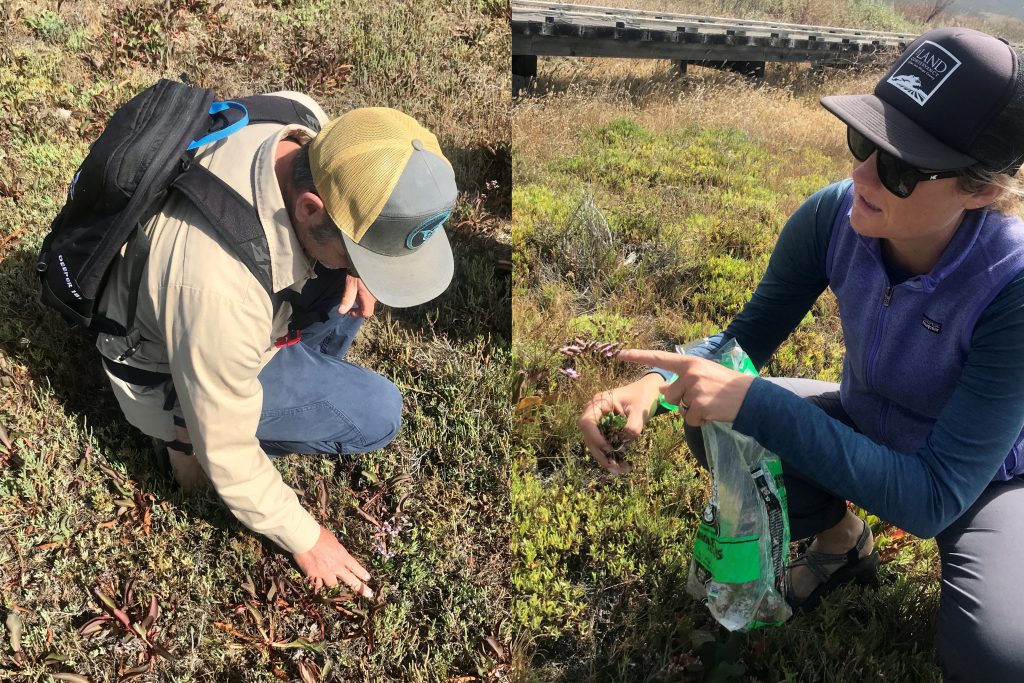 The Land Conservancy of San Luis Obispo County partnered with California State Parks to conduct monitoring and removal of invasive sea lavender. The Land Conservancy is a nonprofit organization that conserves and manages lands for future generations. Estuary Program staff joined them throughout July to learn how to identify and remove European sea lavender. Fortunately, the invasive plant is fairly under control in Morro Bay, unlike in Carpinteria Salt Marsh where it is quite widespread.

European sea lavender is a perennial herb with tiny, bright purple flowers and thick oval-shaped leaves. The leaves remain in a small round cluster, about the size of a fist, at the base of the plant. While it is native to the Mediterranean, it was spread to North America by humans and is now found in the San Francisco Bay area as well as on the central and southern coasts of California. This plant likes the salt marshes of the west coast because they are similar to the habitats found in its homeland.

To keep an eye out for invasive European sea lavender, you need to know how it differs from its native counterpart, California sea lavender. Also known as western marsh rosemary, California sea lavender is native to western North America. As the two plants belong to the same family, they have a lot in common. Our native species is also a perennial herb that favors coastal, sandy habitats.

However, the two plants differ somewhat in appearance. California sea lavender has longer, thinner leaves with tiny flowers that are a duller purple than those of its nonnative counterpart.

Unlike the invasive plant, the native plant’s leaves do not cluster. They can also grow quite large, extending up and out from the base of the plant.

How we remove European sea lavender

Since European lavender’s seeds are easily dispersed by wind, water, and people, it is especially important that we identify and remove these invasive plants before they mature and spread. We remove these plants by hand, making sure to pull up all of the roots.

We’re on the lookout for this invader

If left unchecked, nonnative plants like European sea lavender can displace and overtake the native and endangered plants that naturally grow in the estuary. Salt marsh bird’s beak (Chloropyron maritimum) and California seablite (Sueda californica) are examples of these rare and protected plants.

To preserve the bay’s biodiversity, the Estuary Program, The Land Conservancy, and other partners are keeping an eye out for this nonnative sea lavender and responding rapidly.

What you can do to help combat invasive plants

1. Leave invasive plants where you find them if they’re not on your land.

If you spot European sea lavender or another invasive plant while hiking a local trail, don’t pull it. The areas where these plants grow are sensitive, and you could harm other plants or animals while attempting to help.

2. Do your research before removing invasive plants on your property.

If you know that you have invasive plants in your yard, research the best times and methods for removing them. Remember, pulling certain plants when their seeds are mature can actually cause the unwanted plant to spread.

The best thing you can do to preserve Morro Bay’s biodiversity is to grow native species at home. Native plants are drought tolerant, so they help save water. They also support other native wildlife, like butterflies, bees, and birds, that are adapted to feed on them.

To get started, check out the California Native Plant Society’s advice on how to plan and create your native garden with plants that thrive in San Luis Obispo County.