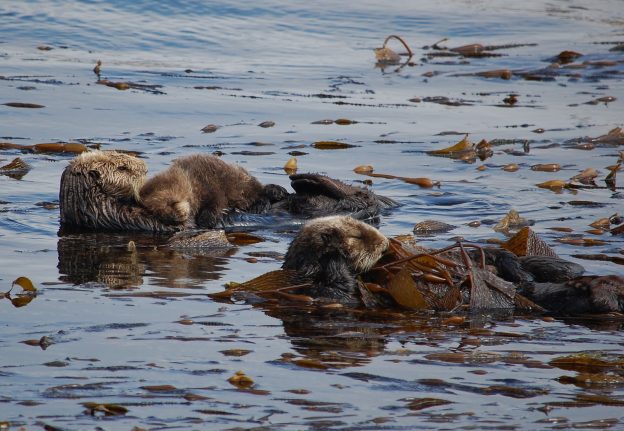 You might have admired sea otters near Coleman Beach, Morro Rock, or the South T-pier, but how much do you know about Morro Bay’s furriest residents? Since it’s both Sea Otter Awareness Week and National Estuaries Week, it’s a good time to test your knowledge with this quick quiz. (Scroll to the bottom of the blog post for the answers and more fun sea otter information.)

Sea Otter Quiz
(Scroll down to find the answers to this quiz and more sea otter facts.)

(Spoiler alert: you’ll find the quiz answers below this photograph.)

A group of sea otters is called a raft. This raft makes their home in the Morro Bay National Estuary. Photograph courtesy of “Mike” Michael L. Baird, flickr.bairdphotos.com

How many hairs do sea otters have per square inch of their bodies? Answer: Up to 1,000,000

Sea otters have the thickest fur of any mammal, and that fur is essential to their survival. Sea otters lack blubber, the thick layer of fat that keeps seals and sea lions warm. Instead, their thick fur traps air against their bodies, which helps insulate them against the cold water.

Sea otters were once hunted almost to extinction for these thick, soft, pelts. They were so scarce by the early 1900s that they were thought to be extinct along the California Coast. However, one small group of otters survived along the coast of Big Sur; this group was first sighted in the 1930s. The otters that you see in Morro Bay today are descended from this population. 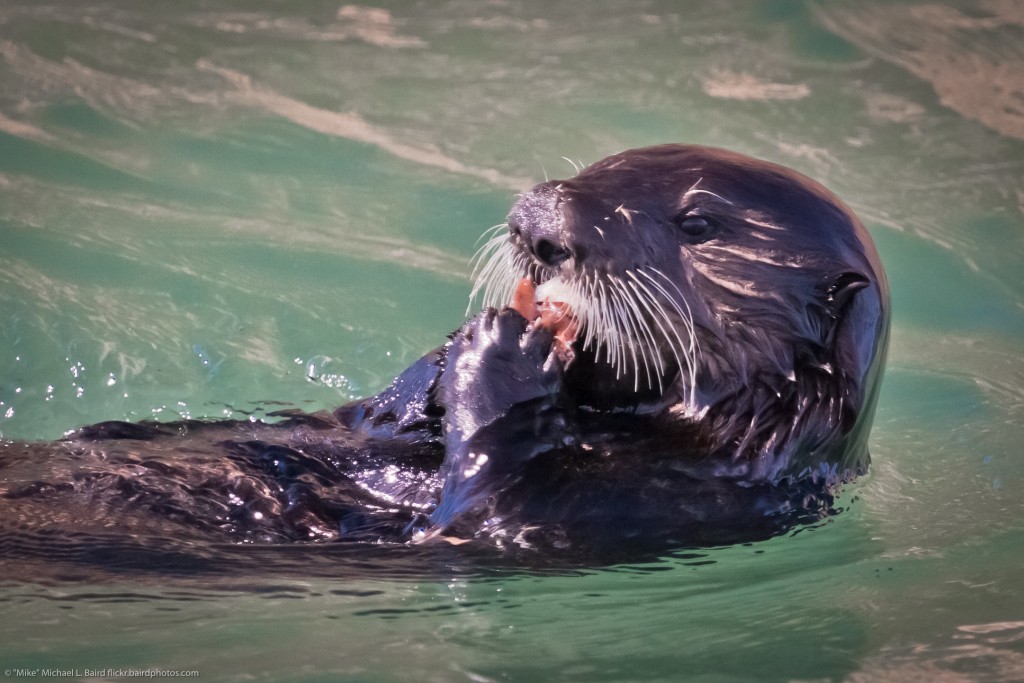 How many pounds of food would a 45 pound sea otter need to eat each day? Answer: about 11 pounds

Sea otters need to eat 25% of their body weight each day in order to stay healthy. While they often look like they’re lounging or playing, sea otters are actually working hard just to survive. Much of their play-like behavior—rolling over, rubbing and fluffing their fur—is necessary to keep them buoyant and warm. If they aren’t grooming or sleeping, they’re likely to be hunting. All of this activity burns a lot of calories that the otters must replace.

This is especially true of mother sea otters (sometimes called sows), who hunt for themselves and their pups. The caloric demand is so great for mother sea otters that they can raise only one baby at a time. You can help these mothers and babies out by observing them from a distance. This way, rather than worrying about a possible threat and missing out on a chance to catch her next meal, the mother otter can spend her precious energy keeping herself and her baby fed and groomed.

If you see someone harassing a sea otter, you can call the Morro Bay Harbor Department at (805) 772-6254 and report the problem. 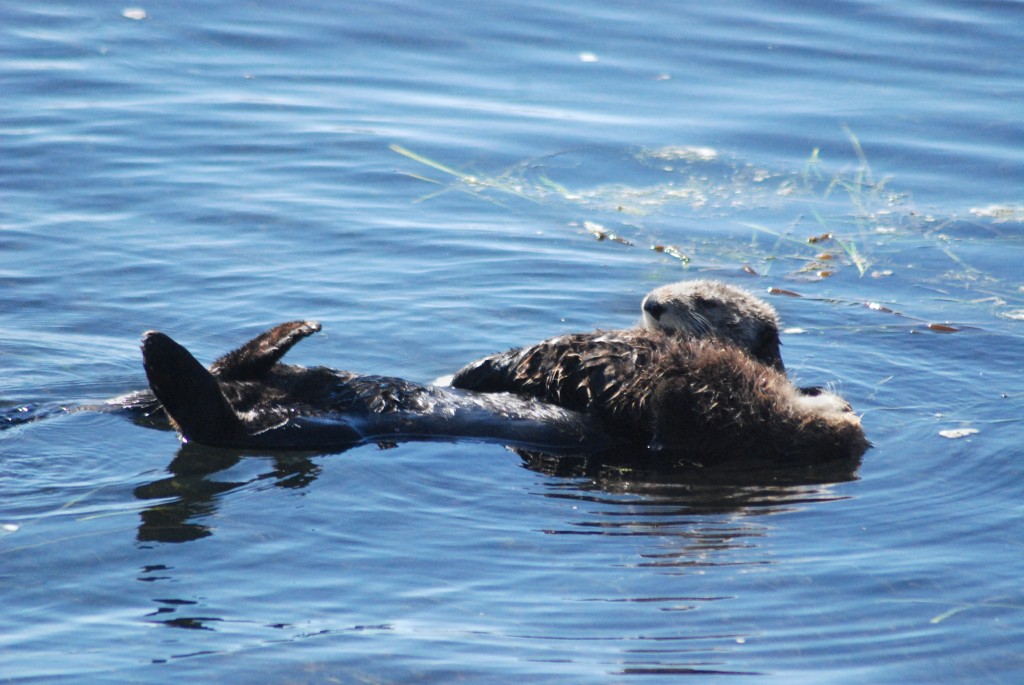 A mother sea otter and her pup float on Morro Bay above a seagrass bed.

How many sea otters are estimated to have lived along California’s coast before they were hunted for their fur? Answer: 13,000 to 20,000 sea otters

While California’s sea otter population is still much smaller than its historical size, the California sea otter census from spring of 2019 found 2,863 otters along the mainland coast. (This number doesn’t take into account sea otters spotted at Saint Nicolas Island.) While this is a decrease of 172 otters from the previous year’s survey, the population is relatively stable, having hovered right around 3,000 since 2016.

This success is due, in part, to their protection as threatened under the Endangered Species Act in 1977, their numbers have begun to rise. Sea otters are also covered by the Marine Mammal Mammal protection act. Protections like these, along with an increased understanding of what sea otters need to survive and thrive, has helped them make this recovery.

Purple sea urchins have a pigment called echinochrome that sea otters’ ingest when they eat these spiny invertebrates. Over time, the pigment can stain sea otters’ teeth, and even their bones, purple.

Which of the following animals is the closest relative of a sea otter? Answer: weasels

Biologically, sea otters are more closely related to weasels than to the other animals on this list. 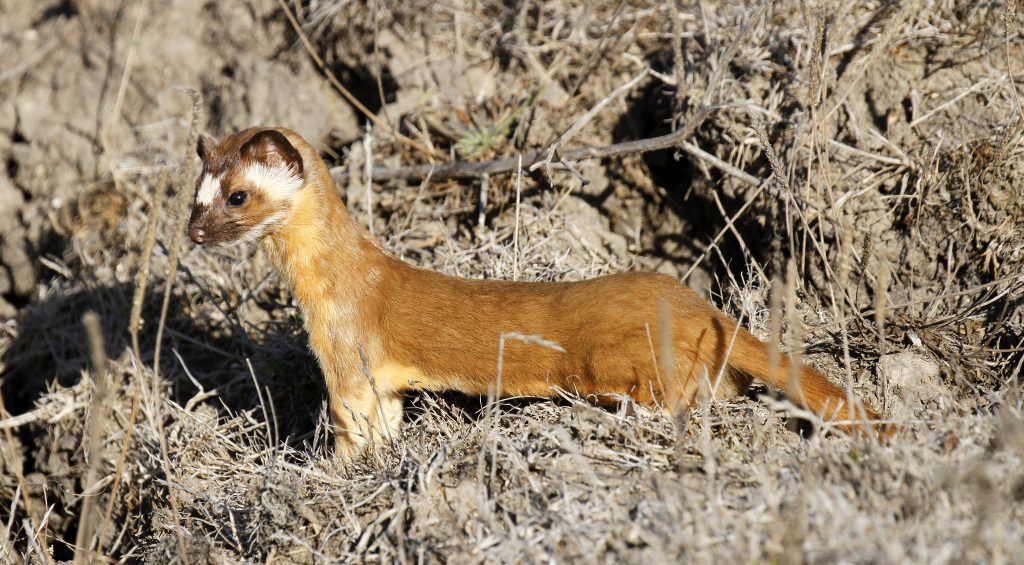 This long-tailed weasel is a closer relative of sea otters than either dogs or sea lions. Photograph courtesy of Robin Agarwal via Flickr Creative Commons License.