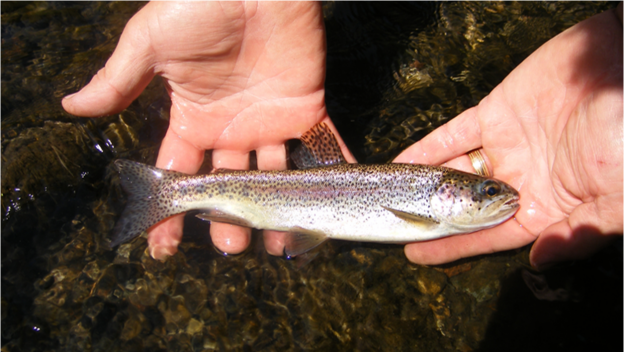 Steelhead in the Morro Bay Watershed

One of the fascinating creatures living in our local creeks is the South Central California Coast Steelhead (Oncorhynchus mykiss). This genetically-distinct population of steelhead is found exclusively from the Pajaro River to the Santa Maria River, and while historically abundant, they were listed as “Threatened” by the National Marine Fisheries Service in 1997 due to rapidly declining numbers. This species continues to struggle due to habitat loss, lack of water, and competition with invasive species. 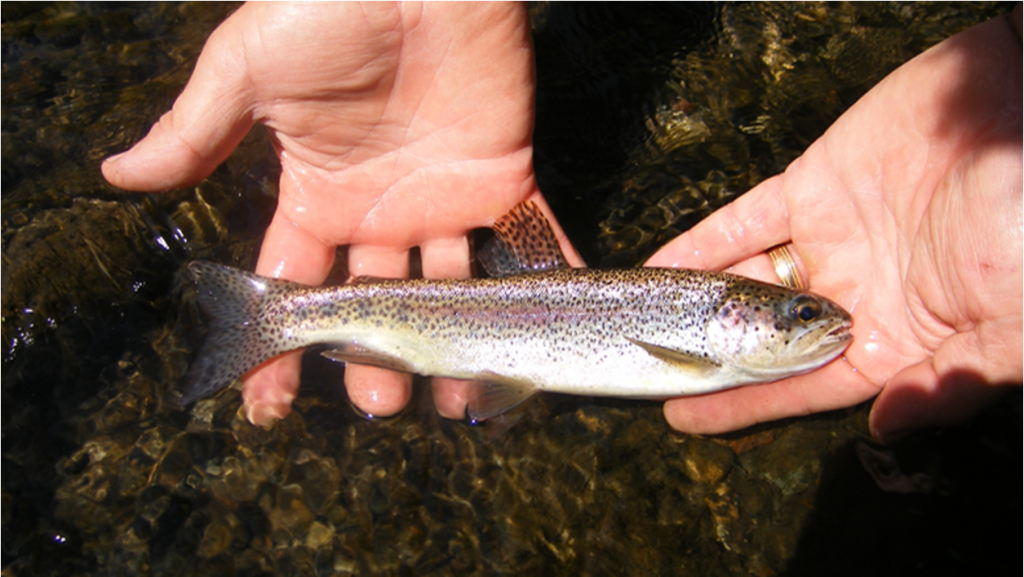 A steelhead (Oncorhynchus mykiss) was captured from the Chorro Creek sub-watershed and measured before safely being released back into the water.

Steelhead belong to the Salmonidae family, along with other species of trout and salmon. Steelhead are anadromous, meaning they are born in freshwater streams, migrate out to sea for several years, and then return to freshwater to spawn. While the ability to make the transition from freshwater to saltwater is an impressive feat, steelhead are still very sensitive to water quality. They require cool, clean, well-oxygenated water to survive and reproduce.

For steelhead, extended periods of time spent in waters warmer than 21°C pose a significant threat to their survival. Warmer waters can negatively impact their reproduction, growth, migration timing, and stress levels. However, it’s important to keep in mind that the 21°C threshold is a level these fish need to survive, and they really need cooler waters in order to thrive. Since water temperature plays a major role in determining how hospitable a creek is for steelhead, the Estuary Program maintains a network of six temperature sensors.

These temperature loggers are called “TidbiTs,” and they are especially useful because they are compact, durable, and have a battery life that can last up to five years. Measuring water temperature every half hour creates a valuable data set since it allows us to see how often and for how long waters may be warmer than ideal for steelhead. 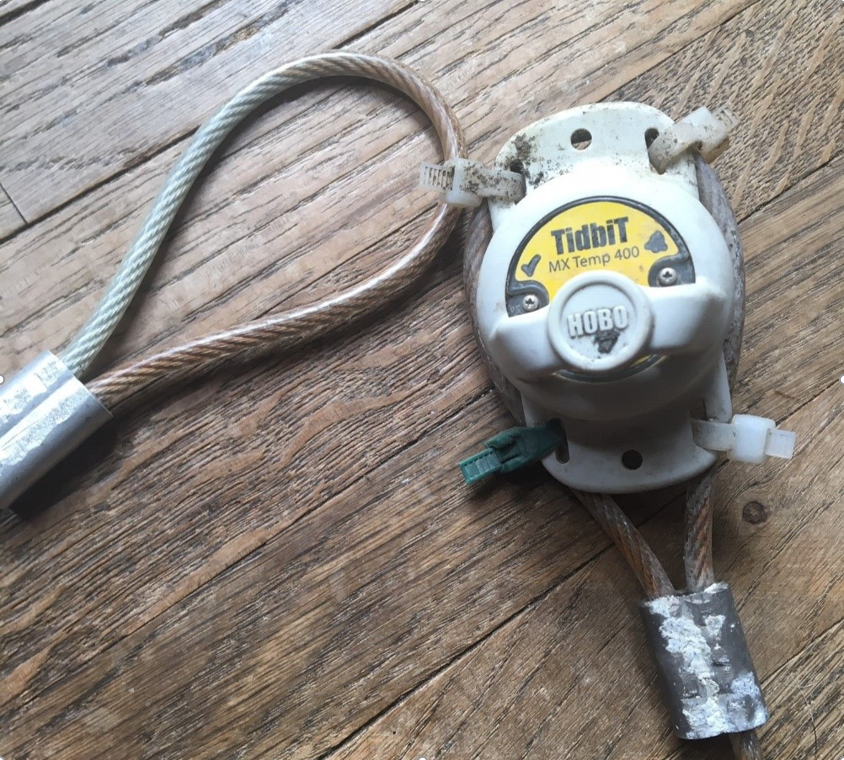 One of the Estuary Program’s HOBO TidbiT MX 220X water temperature loggers. These small sensors can be secured in a creek and programmed to collect temperature readings every thirty minutes.

While steelhead also require well-oxygenated waters, measuring dissolved oxygen (DO) concentration is a bit trickier and more expensive. Luckily temperature can be used as a reliable proxy for DO since colder waters usually mean higher oxygen levels and warmer waters mean lower oxygen levels. The Estuary Program also uses a DO probe to collect measurements during our monthly site visits to ensure accuracy. 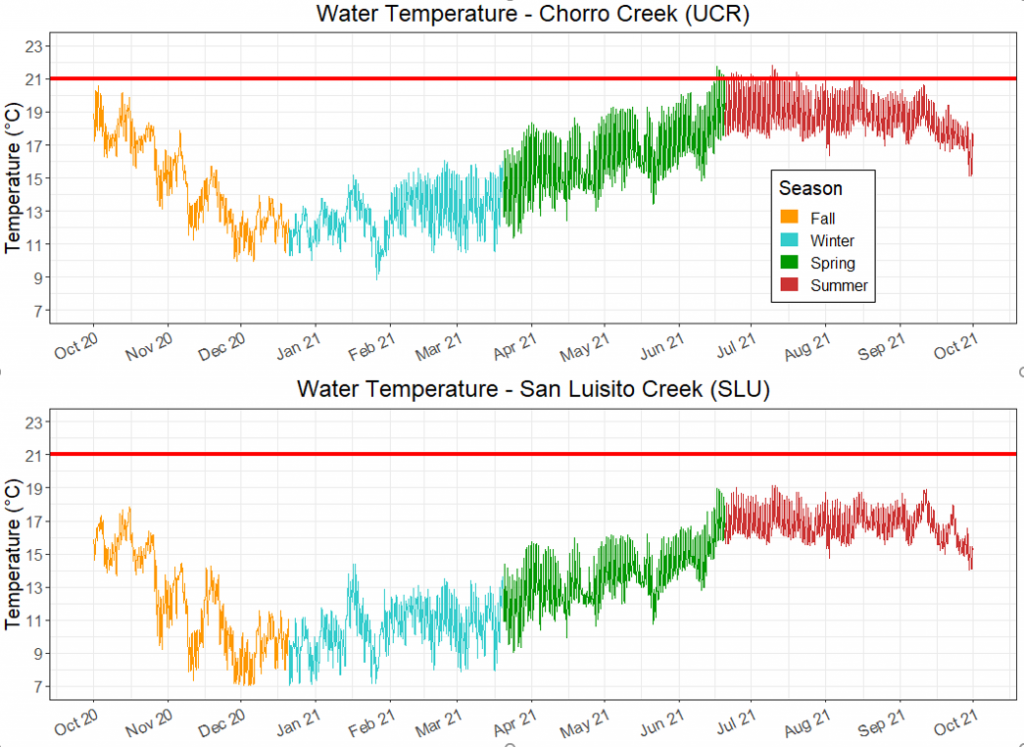 Two figures displaying water temperature from October 1, 2020 to September 30, 2021, color coded by season. The top figure displays data from a site along the mainstem of Chorro Creek and the bottom figure displays data from San Luisito Creek, a tributary that flows into Chorro Creek. The horizontal red line highlights the 21°C threshold that is protective of steelhead. Ideally the water temperatures remain below this threshold year-round.

To complete its life cycle, steelhead must be able to migrate unimpeded from the ocean to the creeks and back. Typically, between late January and May, adult steelhead return to the creeks in an attempt to find a nice patch of gravel to spawn and large wood pieces for shelter. While some scattered wood is helpful, impassible barriers abruptly cut their journey short, forcing them to settle for less-than-ideal habitat which may negatively impact the survival of their eggs. The chance of survival for juveniles is improved if they have more creek habitat to access, allowing them to find food, resources, and hide from predators. To help improve habitat for steelhead, the Estuary Program is currently working with partners to assess removal of two barriers on San Luisito Creek. 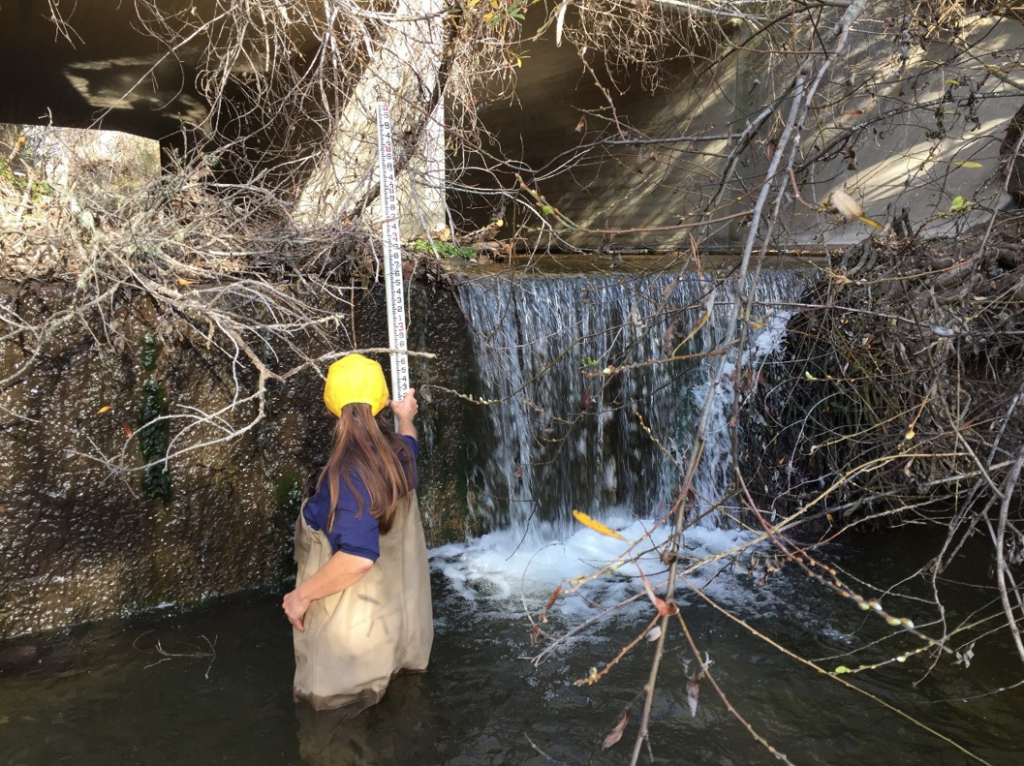 A fish passage barrier located along San Luisito Creek blocks fish access to great habitat upstream unless water levels are unusually high. Fish barriers can be due to low water levels or obstructions in the creek as shown here.

Creek connectivity is not only important for major seasonal migrations but also for the day-to-day movements that allow fish to take advantage of resources in different creek segments. A recent study from the Santa Cruz area described how steelhead move upstream and downstream throughout the day in response to foraging opportunities and predation risk. When creeks are disconnected due to low flow rates or barriers, the steelhead may have a harder time finding food and an easier time becoming something else’s food.

The nonnative Sacramento pikeminnow can pose a threat to native steelhead. This pikeminnow displayed on a measuring board was removed from the creek during annual fisheries monitoring.

In addition to barriers, invasive fish lurking in the creeks compound the difficulty of a steelhead’s trek upstream. The Sacramento pikeminnow (Ptychocheilus grandis) is an unwelcome visitor to the Morro Bay watershed because it feeds on juvenile steelhead and competes for resources. The Estuary Program and Stillwater Sciences are actively involved in managing pikeminnow to protect steelhead populations. An upcoming blog post will share the latest results from this effort.

It’s definitely not easy being a steelhead, but the Estuary Program is committed to using a variety of strategies to restore the population and increase their rate of survival. As our efforts continue, we hope to see these fascinating fish become numerous in our creeks once again! 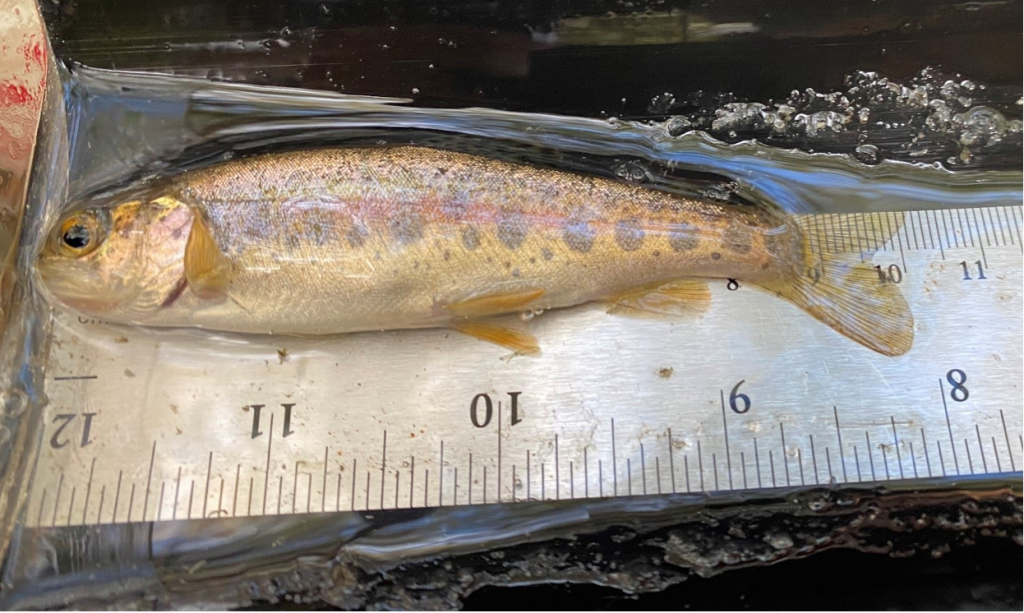 A juvenile steelhead is carefully measured during a survey before being returned to the creek.