Our final post in this series will explore the estuarine and salt marsh plant communities that make up the unique estuarine environment of Morro Bay. Not sure what a plant community is? Take a look at our introductory post to the Morro Bay Native Plant Series, an exploration of our watershed’s diverse native flora!

An estuary is a place where freshwater meets the sea. In Morro Bay, the freshwater creeks and streams from our watershed drain into and mix with the salty seawater of the bay. The mixing of freshwater and seawater creates a unique and productive environment with lots of diverse flora and fauna.

The slow movement of saltwater inland and the gentle flow of freshwater from the watershed bring fine sediments that settle out as mud. This environment is called a mudflat, which can be seen during low tide in Morro Bay.

The mud builds up over time and eventually may rise above the high tide line, at which point a salt marsh habitat develops. Plants in the salt marsh are unique because, in order to survive, they must be tolerant of saline (salty) conditions and being submerged during some high tides.

Fleshy jaumea (Jaumea carnosa) is a halophyte, which is a plant that grows in waters of high salinity. This plant can survive close to and in salty seawater. 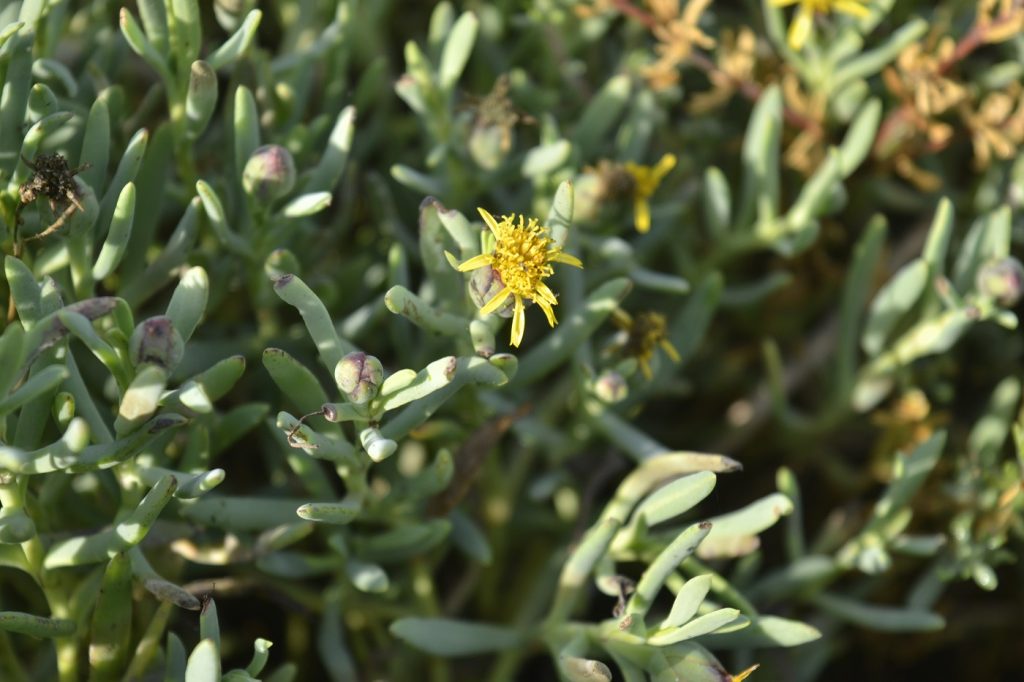 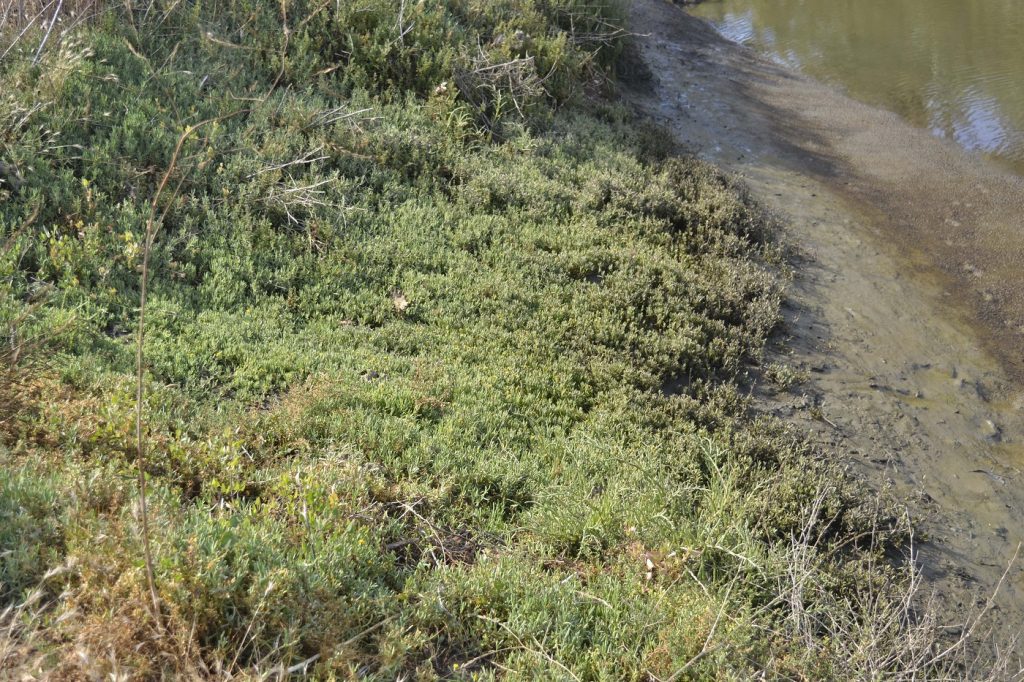 Pickleweed (Salicornia sp.) is another halophyte that can tolerate salt water on its roots. 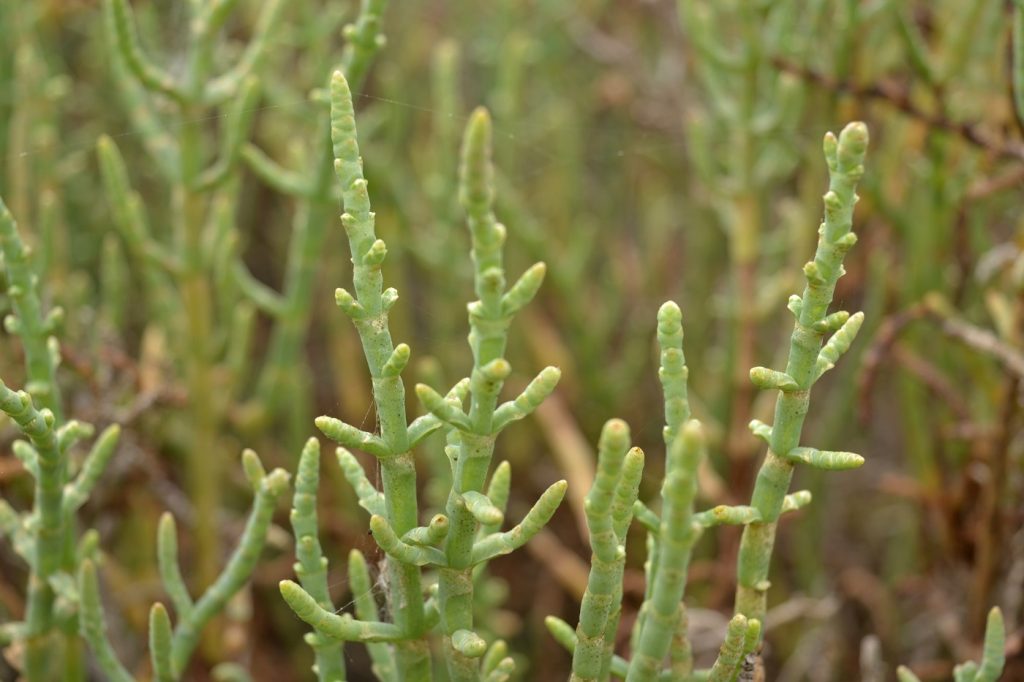 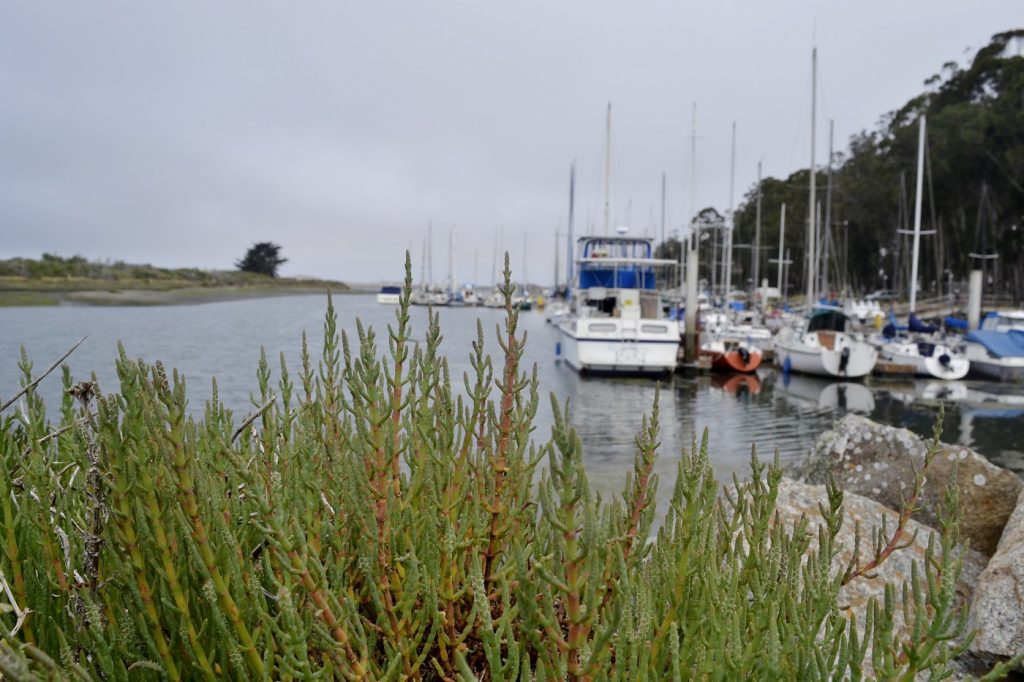 Salt marsh habitat provides a transition between the terrestrial habitat and the estuary. Some plants are less tolerant of saline conditions than jaumea and pickleweed, and are therefore found farther away from the high tide.

Even though these plants are not close to the high tide line, their presence still indicates that salt water is in the soil near the surface.

Alkali heath (Frankenia salina) can tolerate relatively saline conditions and has the ability to excrete excess salt if necessary. 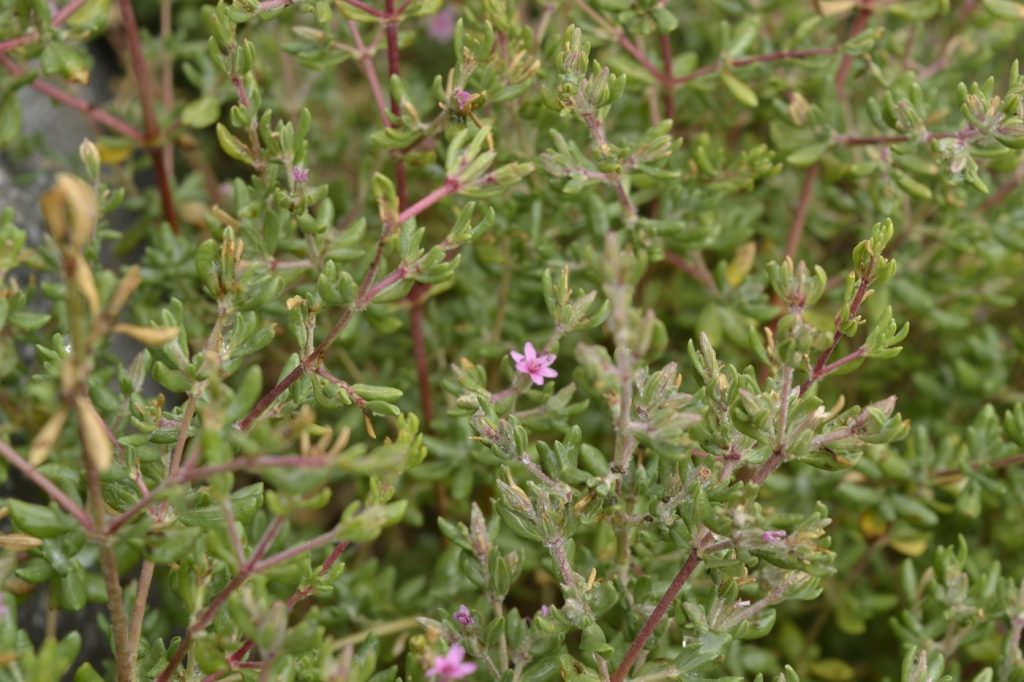 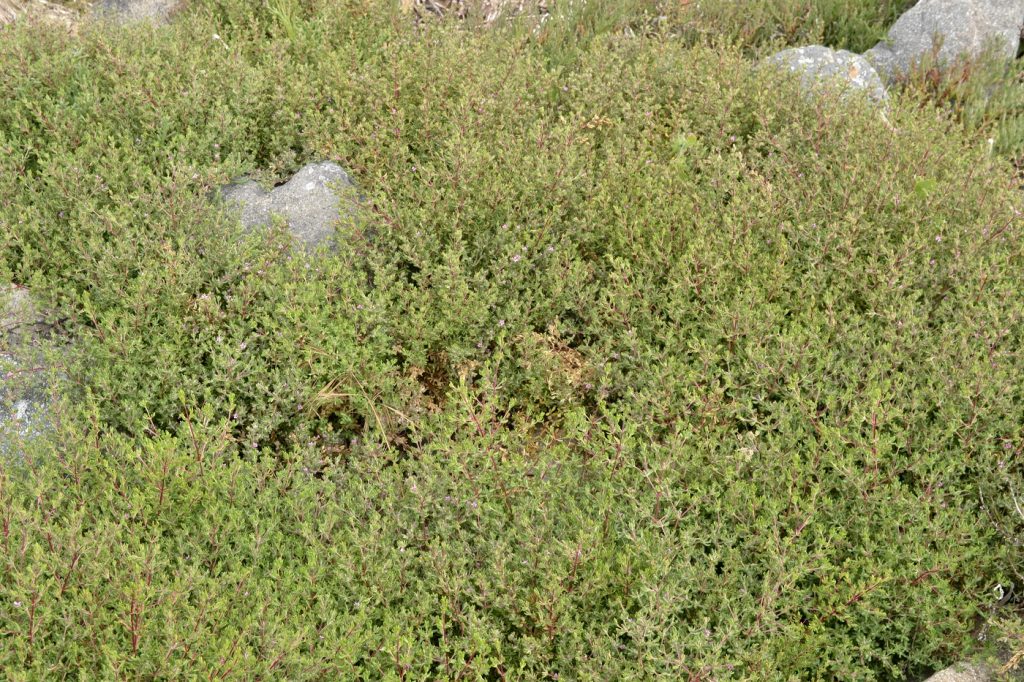 California seablite (Suaeda californica) is a rare plant that grows on the fringes of salt marsh habitat. According the the U.S. Fish and Wildlife Service, high beach erosion, sand burial, and insufficient sand moisture are likely factors that limit sea blite to the high tide zone of salt marsh habitat. This plant has been federally listed as endangered due to loss of estuarine habitat; in fact, Morro Bay supports the very last remaining natural population. A group of wetland ecologists from San Francisco State University have established and are monitoring a restored population in San Francisco marshland. 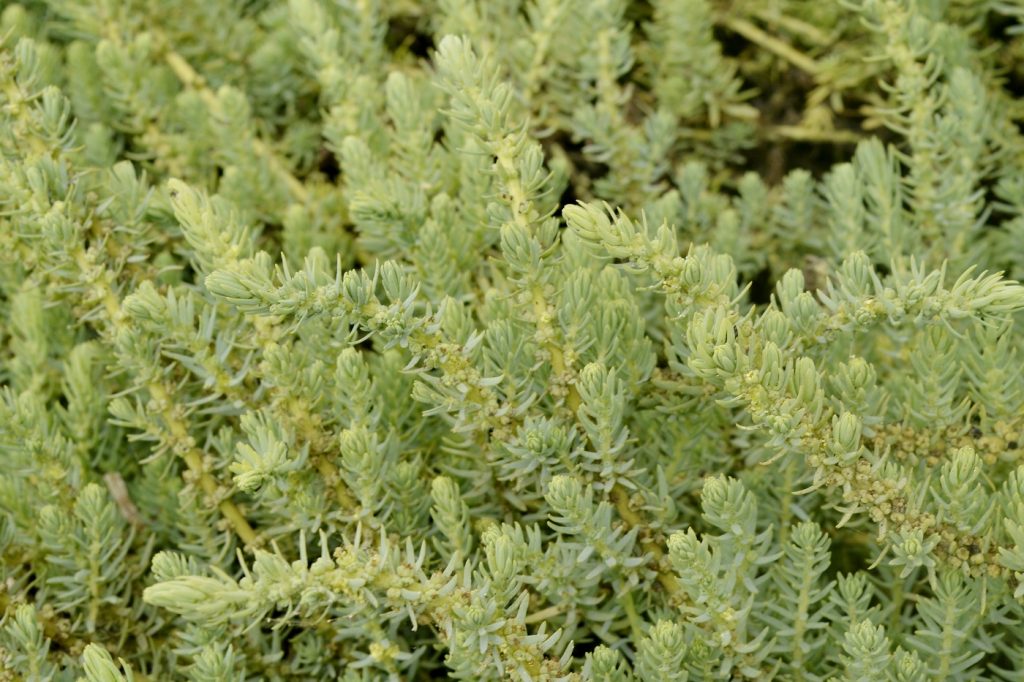 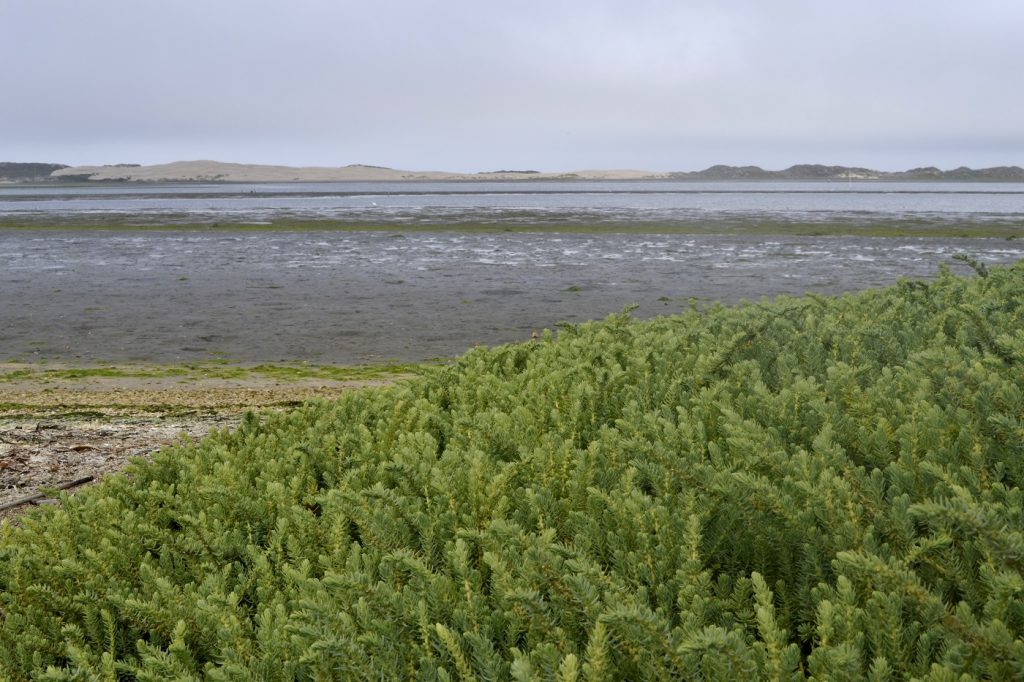 California sea lavender (Limonium californicum) is another transitional plant that grows on the fringes of salt marsh habitat. 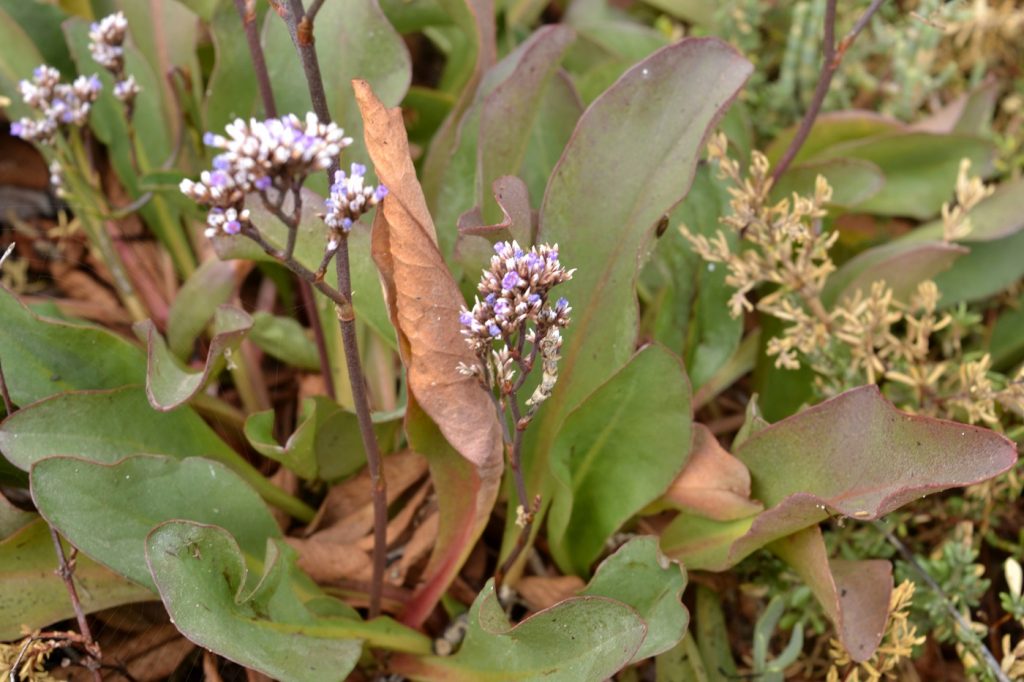 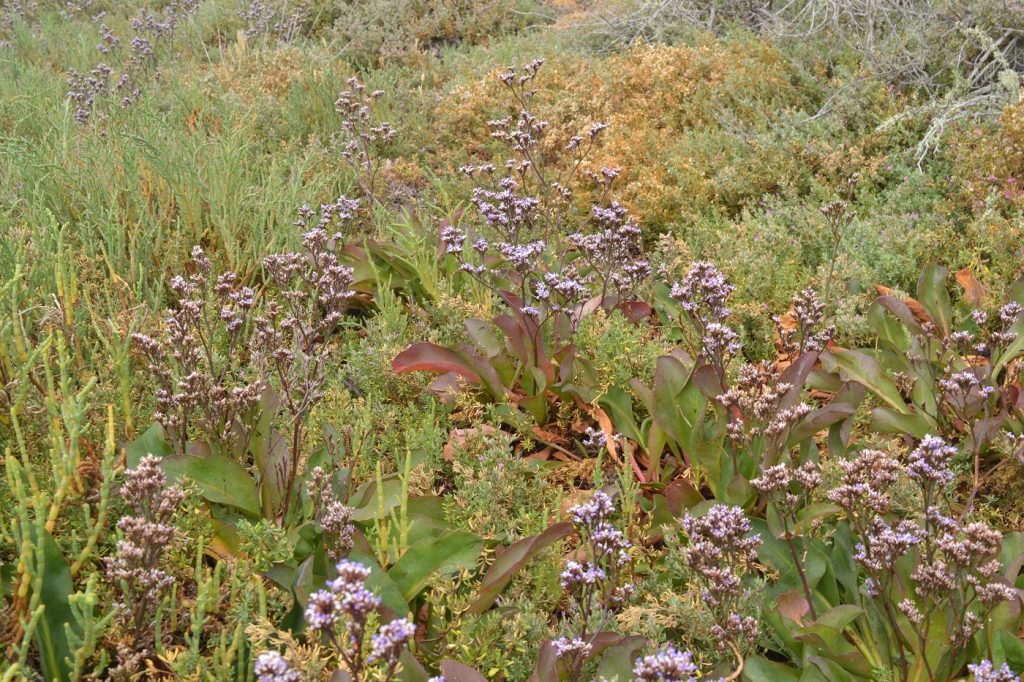 Salt marshes and mudflats may seem barren at first glance, but these are some of the most productive marine habitats. The slow moving water inland from the ocean and the slow moving water draining from the watershed bring nutrients that settle in these habitats, which provide food for many animals. Because of this, over 200 species of birds stop in Morro Bay to feed and rest during their migratory journey along the Pacific Flyway. Some of these species are present in Morro Bay year-round. 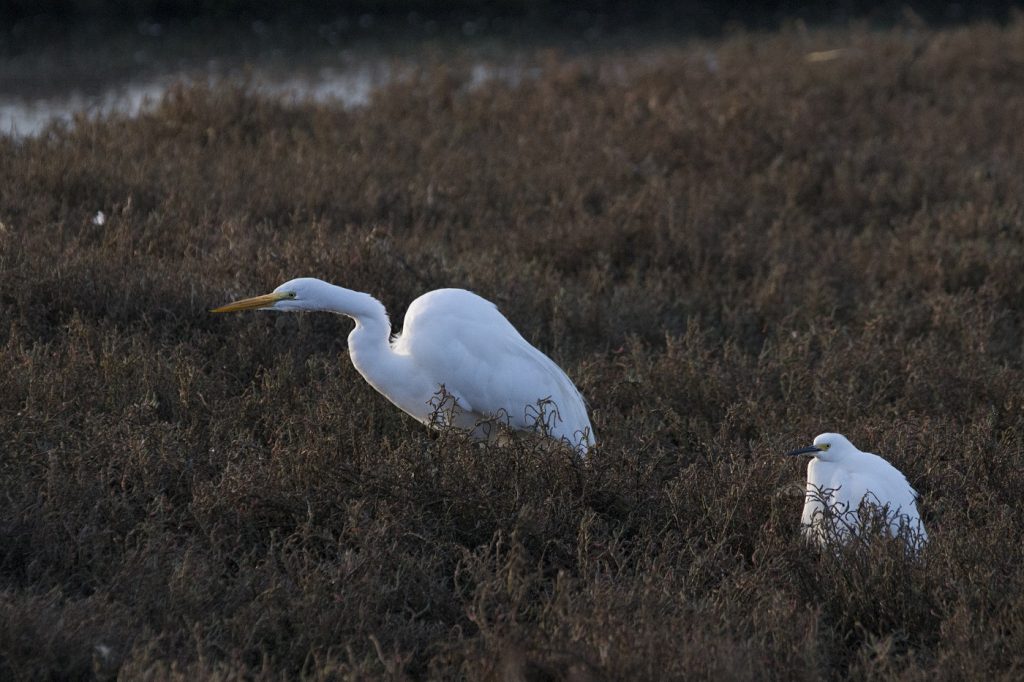 A long billed curlew (Numenius americanus) on the mudflat. The curlew’s long bill is used to probe for shrimp and crabs that burrow in the mud. 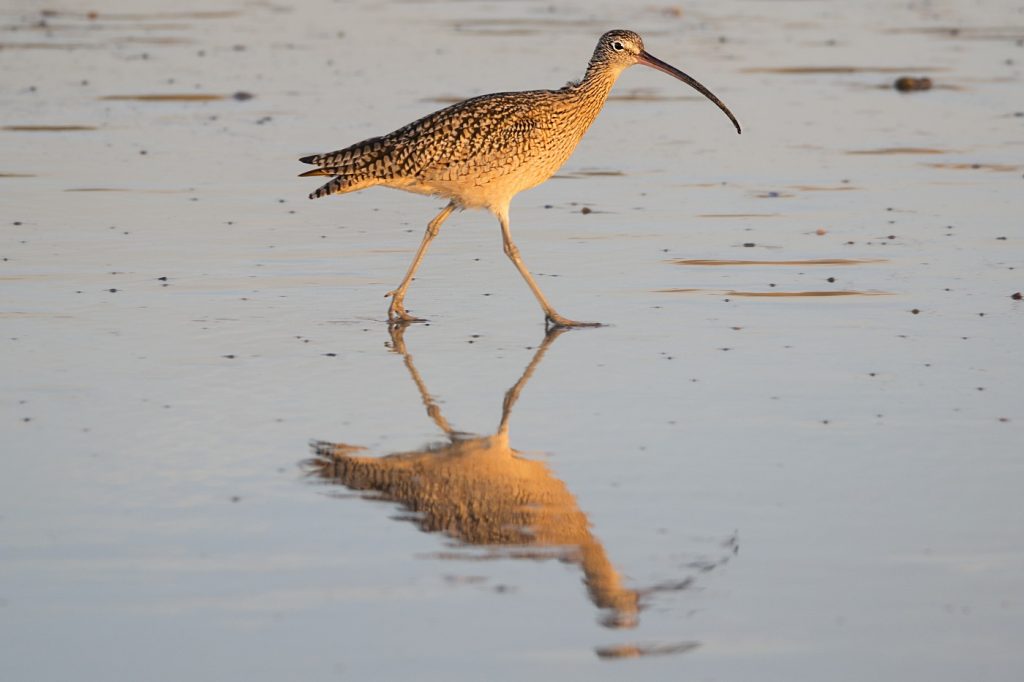 How it’s all connected

This view from Cerro Cabrillo contains all plant communities in our watershed.

This concludes our exploration of the Morro Bay Watershed native plant communities. Take a stroll down the Marina Peninsula trail or up Black Hill to view the mosaic of plant communities that we are lucky to have in our watershed, and try your hand at identifying the many native plants that grow here!

To find out more about the native plants described in this blog post series, the Trees and Shrubs of California guidebook and the Calflora website are excellent sources of information.